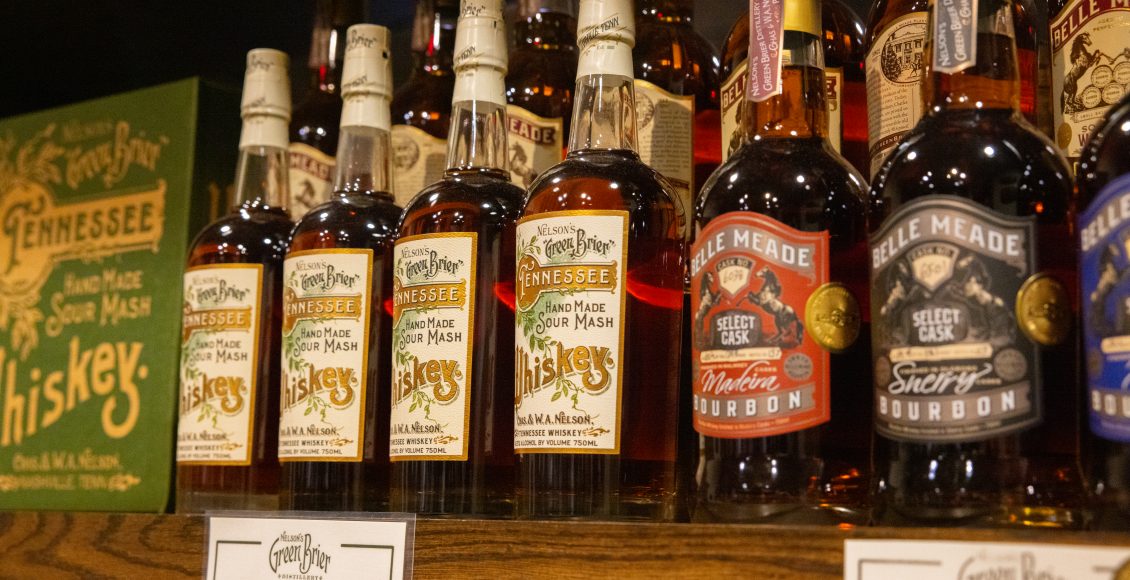 This story begins in 2006 with two brothers and their father on an outing to pick up a side of beef. The town is Greenbrier, just 20 miles north of Nashville. One of the brothers, Charlie Nelson, walks over to a roadside historical marker while the other two are getting gas and to his astonishment sees his name. He reads about his great-great-great grandfather and the old distillery he founded more than 130 years ago, its metal tiered warehouse located just one mile to the east.

The family picks up their meat from the butcher and they ask about the distillery. And there, sitting just across the street, they see it: the original whole barrel warehouse still standing, the original spring still flowing. They drink from the spring and perhaps don’t realize that they’ve just stepped into the next chapter of their lives. They make a stop at the nearby Historical Society, and the hairs raise on Charlie’s neck as he stares at two original bottles of Nelson’s Greenbrier Distillery Tennessee Whiskey with his name on them. He looks at his brother Andy, and together, they realize that this was what they were meant to do. They were going to bring the original Tennessee whiskey back into production.

A History of Whiskey

The Nelson story actually begins in Germany in 1850 when Charles Nelson, the namesake, sells the family’s soap and candle factory. He converts all of the family’s possessions to gold—which he has sewn into the lining of his clothes—and sets sail with his wife and six children aboard the Helena Sloman bound for America. Sadly, the father never makes it. During a storm, the steamer sinks and as a passing ship attempts a rescue, the lifeboat that the namesake is on capsizes, and with the sewn-in gold weighing him down, he doesn’t survive. The rest of the family arrives in New York penniless and mourning the loss of the family patriarch.

The oldest son, Charles, finds work as a candle maker. He later moves the family to Cincinnati where he works as a butcher. But it’s his move to Nashville just before the Civil War and his leap into the wholesale grocery business where things start pointing toward whiskey. “He had three great selling products,” says Charlie, recounting the family’s story, “coffee, meat and whiskey.” You can guess what ended up happening there. “He was one of the first to bottle and sell whiskey, rather than selling it by the barrel or the jug,” Charlie says.

Charles sells the grocery business and throws himself in to his best-selling product, buying Greenbrier Distillery in 1870 along with a patent for the improved distilling method. He expands and changes the name to Nelson’s Greenbrier Distillery. By 1885, more than 2 million bottles of whiskey are coming out of the distillery annually and being sold all over the world.

When Charles passes away in late 1891, Louisa, his wife, takes the helm, making her one of the only women of her time to run a distillery. The business continues to thrive for the next 18 years, but as history would have it, that wouldn’t last.

While the 18th Amendment, which banned the manufacture, transportation and sale of alcohol, isn’t ratified until 1919, Tennessee is one of the few states who puts statewide laws into effect even earlier. It is 1909 when the sale of alcoholic beverages is banned in the state. The distillery succumbs to the new legislation and shuts its doors.

Fast forward to today and Charlie, Nelson’s Greenbrier President and CEO, lights up when he talks about his family’s legacy. He and Andy spent three years researching and planning, and exactly 100 years after its closing, the brothers re-formed the family business.

“We didn’t know about the business, and we had never made whiskey before,” Charlie says. So when they began, the first step was learning the trade from the best there was out there. “We were able to meet with a lot of the folks in charge at almost all the distilleries in Tennessee and Kentucky, and a bunch of them knew a little bit about the history of my family’s distillery.” As Charlie and Andy would come to learn, the whiskey distilling community is tight-knit with a great amount of respect for the history of the tradition. They were also filled with knowledge of what it would take to make this work. “Every conversation that we had with these experts, they said, ‘All right, there are two things that you need: patience and you’re going to need even more money,’” he recalls. Patience they had, but the money? Well, that was a different story.

They needed a guide on this journey. And in no time found one: Dave Pickerell, a former Maker’s Mark master distiller who had been doing some consulting. “He’d been in the business so long himself that he knew the nuts and bolts of distribution, hospitality, and most everything else it takes to run a business of this kind,” Andy says. “But he was a master distiller to his core.” Pickerell loved the details and engineering of what the Nelsons were doing, chiming in on the plant makeup and providing knowledge of the big picture of sales and hospitality. But most of his work was on distilling, leaving the Nelsons to dive in to the money side of things. “It was a little young and naive at the time,” Charlie says. “I thought, man, we know some people with some money; we’ll be able to raise a few million dollars in a few months.”

However, a little more than two years went by and they hadn’t raised a penny. “We had plenty of potential investors come to us wanting more control than we were willing to give them,” Andy says, “or with ideas for our business that they required in order for them to give us their money.” Like making vodka. Whiskey has to age, so the brothers remember investors pushing them to make vodka or an un-aged product to make quick money while it did. Andy’s reaction: “While that’s what plenty of distilleries do, it didn’t appeal to us.” Vodka was never part of the Nelson business model and with a desire to stick as close to the history of their family business as possible, they declined.

So they put up everything they owned—including their parents’ house—to guarantee a loan, and started work with a contract distillery, sourcing barrels, and creating the Belle Meade Bourbon, one of 30 labels that Charles Nelson produced in the 1800s. The bourbon was the bridge to building their own distillery. “After Belle Meade was on the market for about a year or so and people could see we were having some success in the market, they were more willing to invest in our idea,” Andy says. Once they raised enough to build the distillery, the whiskey business finally began, with Andy at the helm as Master Distiller.

The goal from the start was to recreate the whiskey recipe that great-great-great grandfather Nelson created. However, it’s not as if the recipe sat waiting for them when they entered the distillery that first time back in 2006. So they got to work.

Searching through city and state archives—and a surprisingly large number of local newspapers—the brother found records that helped them piece together the Nelson original. “We found a bunch of records, including tax documents and purchase receipts, that indicated the amounts of each grain that Charles Nelson purchased at a time,” Andy recalls. “From this, we were able to piece together a pretty accurate tally of the grain bill he used.”

Nelson was a bit of a pioneer in the Tennessee whiskey category. His recipe called for wheat. “It’s much more common for American whiskeys to be made with corn, rye, and barley,” Andy says. But it made sense; wheat was much more commonly grown in Tennessee. “It created for us a natural and immediate point of differentiation from the start, and yet again, was something we didn’t have to invent in the modern day.” Filtering the product through Sugar Maple charcoal was another game changer.

With the recipe recreated and their drive for success at its peak, the Nelson brothers laid down their first barrels of whiskey in 2014. “The first batch may not have been the most technically-sound made batch, but it probably had the most love put into it,” Charlie says. And while production was slow at the start, things ramped up as the years went on. Today, the distillery produces a few thousand cases a year.

If ever there was a story of the entrepreneurial spirit and perseverance, this is it. It took 13 years before the first reborn bottle of Nelson’s Greenbrier Tennessee Whiskey went onto the shelf. And as Charlie says, it wasn’t without its unexpected moments. When Belle Meade Bourbon came out, a story by the Washington Post—which the brothers thought would be just about the family’s history—zeroed in on the bourbon’s sourcing from out of state. And in the story, a source called their business model “flawed.” The brothers were unsure what this would mean for their potential investors.

“We were still raising money at the time, and I thought it was over. There’s no recovering from this,” Charlie recalls. But Andy’s line, “There’s no such thing as bad press,” proved true. When the article came out, a potential investor—who they were sure would back away—called the brothers and told them they were in. “After that experience, I learned nothing is ever as bad as it seems, and nothing’s ever as good as it seems.”

It was October 1, 2019 when the whiskey finally hit shelves. Charlie sat in the parking lot of a liquor store that morning 20 minutes before it opened, waiting anxiously to go in to be the first customer to buy a few bottles. He stopped at a few other stores on his way to the distillery and did the same. After a busy day, he got home that night and poured himself a glass. Shockingly as he was about to take his sip, he burst into tears. Thirteen years of hard work, reaching for a dream that seemed so possible and yet filled with such challenge had finally brought them to this moment. “It was the best glass of whiskey I’ve ever had.”

Inside Nelson’s Greenbrier Distillery, the 1870 patent sits on display on the wall, along side original price sheets and handwritten letters from the Nelson history. The first modern barrel, filled on August 16, 2014 and signed by Charlie and Andy, sits full in a rack in the barrel warehouse—a visual reminder that with time and persistence, anything is possible.

The story began with a family seeking a new life in a new country, amidst the heartache of losing their patriarch, and while we are more than 170 years removed from that beginning, the level of connection felt between past and present couldn’t be more real. Each year around July 4, Charles Nelson’s birthday, distillery staff pay Charles a visit, toast his memory and pour some out for him at his grave. “We take a lot of inspiration from what he did and who he was, how he conducted himself and how he ran his business,” Charlie says. “He paved the road. Not just for us, but for Tennessee whiskey as a category and a lot of American whiskey in general.”

What might he think today of his great-great-great grandsons recharging his dream? Well, I guess we will never know. But something tells me he’s on board. “It’s hard to know exactly what he would think of our business today, but I have to believe he would be proud of us,” Andy says. “Learning his staggering rags to riches story and his drive to succeed, I can only imagine he’d appreciate what we’re doing.”