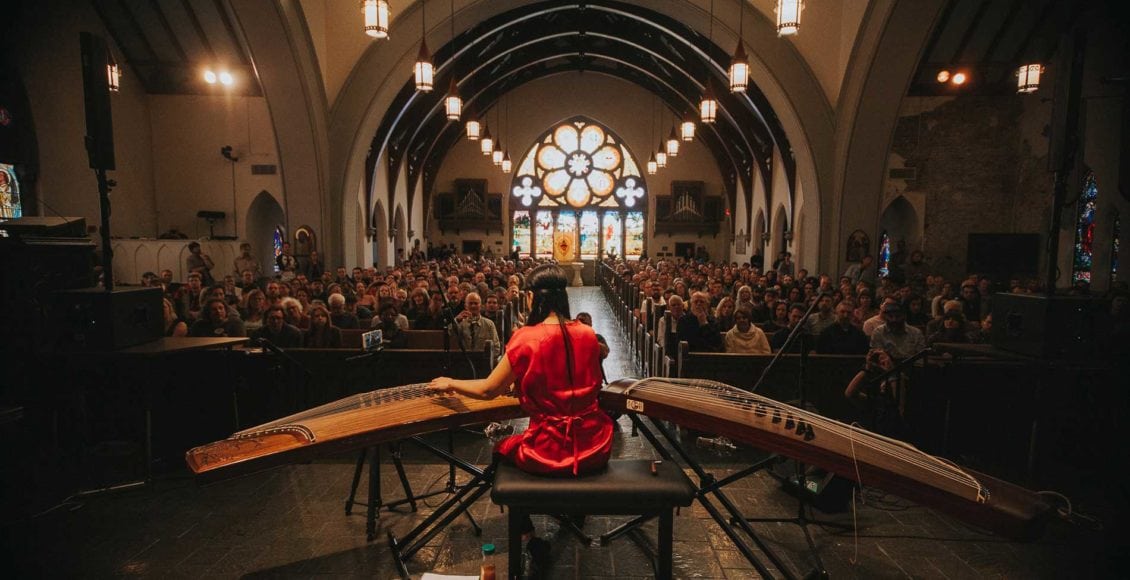 The 2018 Big Ears Festival promises to be the most adventuresome yet. AC Entertainment founder Ashley Capps answered a few questions from Cityview editor Keith Norris on the beginnings of the festival, this year’s lineup, and its place in the community.

Keith Norris: What was the genesis of Big Ears?
Ashley Capps: The first Big Ears, in 2009, grew out of a collaborative brainstorming session.  I had just returned from an amazing weekend on the southern coast of Norway, at a beautiful little festival called Punkt, and I was inspired.  So I assembled a small group of friends – Jason Boardman (from the Pilot Light), Chris Molinski (who was then at the KMA), Steve Greene, my colleague at AC, and my assistant at the time, Laura Sohn – all of whom I knew to have curious spirits and aesthetic sensibilities. We started sharing ideas and enthusiasm, and Big Ears was born.  It happened fast.  We spent an afternoon or two imagining what it might be and then we just did it.

On a personal level, the ideas behind Big Ears have been a passion and interest for as long as I can remember:  There’s a strong love and appreciation for music, of course, but there’s also an endless curiosity about everything it touches, about its impact and influence and inspiration on our world – from the spiritual and the religious to the social, political, and economic, to the deeply personal and private.  Music can bring us together in celebration or separate us into tribes.  My interest is in the ideas, the shared experiences, the connections and influences and how they can be traced, not only across musical genres and art forms but across history as well as different cultures and social classes.  Philosophically, at least, that’s at the heart of Big Ears.

Was it planned from the beginning to include such a wide range of musical genres and crossover with other art forms?

Yes.  There was the central idea of bringing together different genres of music, along with different art forms, and exploring the connections, influences, and sensibilities that they might share.  It can be a fascinating lens through which to explore the world, new ideas, different cultures.  It’s fun and fascinating to discover and follow these paths, to discover new ones, and to see where they might lead.

There’s the social component too: bringing together different audiences that might otherwise seldom meet.  Even where there’s a rich exchange of ideas and information among composers, musicians, and artists themselves, the audiences sometimes seem unnecessarily segregated and compartmentalized.  We like mixing it up a bit, hoping to inspire the curiosity to explore some new things and to share one’s passions and interests with others.

Did you anticipate both the critical and popular success of Big Ears?

I thought it was an idea worth exploring, or we wouldn’t have launched it in the first place. But I would never have imagined just how strongly the idea would resonate with others.  The response from so many people from all over the world – audiences, artists, and writers alike – has been very humbling and inspiring.   It has become an amazing thing to be a part of, and a remarkable opportunity too. But for me at least, there’s also now a responsibility to ride this wave and see what the festival can become.  That’s very exciting – and somewhat daunting at the same time.

What’s new this year that we should look for?

For me, each year builds upon the last. There’s so much great music during the weekend – over 100 concerts and every one of them was booked for a reason – in our beautiful historic theaters, churches, and other venues throughout our downtown.  There’s a stronger jazz component than ever this year, along with some

incredible contemporary classical and opera performances, and of course rock, folk, electronica…  This year, the celebration of our own regional culture – the traditional Appalachian music and bluegrass – is certainly bigger than ever before.  There’ll be a “fiddler’s convention” with over 3 dozen amazing fiddlers from the region, along with square dancing on Market Square, busking on the streets, jam sessions, and more.  Much of this will open to the public of course. There’s a great film program and all sorts of other activities as well.

It’s my feeling, however, that the best way to experience a festival is just to go all in.  Most everyone starts out with a plan – that list of “must see” shows – but many soon discover that the truly exciting festival experience starts to happen once your plans tend to fall to the wayside, when you start meeting new people, walking into a theater or club not knowing for sure what to expect, and finding yourself completely captivated by an artist you’ve never heard of before.  Those unanticipated experiences often end up being the unforgettable highlight of your weekend.  Many people tell me that this is what Big Ears is really all about for them.

To what degree has Big Ears put Knoxville on the cutting-edge-of-music map?

Knoxville’s a great setting for the festival.  Initially, having Big Ears in Knoxville was a bit confusing – certainly a surprise for many people – but once someone visits the city, they get it.  We have beautiful, world-class venues in a wonderful downtown that has a rich, vibrant, historic character and a very human scale.  We now have excellent restaurants, great bars and shops, and increasingly fine hotels. And everything is within easy walking distance of everything else.  Our visitors tend to fall in love with Knoxville during their stay.

During this time, Big Ears has become one of the most highly anticipated cultural events in the world.  In my mind, you cannot separate that success from the character of the city. Everything comes together to create an incomparable experience: the great venues, the walkability of the city, the fine restaurants all help to enhance the character of the festival.

Beyond that, I tend to see Tennessee as having been on the cutting-edge-of-music map for the past century or longer.  From the Carter Family in Bristol – and all of those mountain music traditions; flowing down through Knoxville with Flatt & Scruggs, Chet Atkins, Dolly Parton and those live radio shows broadcasting from Gay Street; crossing over to and from Nashville and the Grand Ole Opry. Then you’ve got all of that jazz and blues coming up the Mississippi from New Orleans and through the delta to Memphis, with the electric blues of Howlin’ Wolf, B. B. King, then Sun Records and Stax / Volt and Elvis and Carl Perkins and Booker T and Isaac Hayes and Al Green. We’ve been the birthplace of the popular music that revolutionized the world.  For decades.  And we still are.

What are the rewards of putting on the festival?

Oh, gosh, there are so many.  Being able to work with many of the world’s most extraordinary and influential musicians and artists, people whose music has had a powerful impact on my own life; presenting their work to new audiences, and being able to do it in my hometown, in the region of the country that I love, while collaborating with so many friends, colleagues, and cultural leaders in our community as well as all over the world…that’s like a dream for me.  I feel very lucky.

Where do you see the festival going and growing?

The challenge now is to continue to build a strong, sustainable organization so that we can fully make this opportunity all that it can be.  We became a non-profit in late 2016, and we’re working with leaders in our community to create the foundation needed to achieve the potential that Big Ears offers.  I believe that the transformative power of art and culture has a vital and dynamic role in building successful, prosperous communities.   Big Ears offers us a rare opportunity, and my goal is to build the team that can nurture it and help it grow.