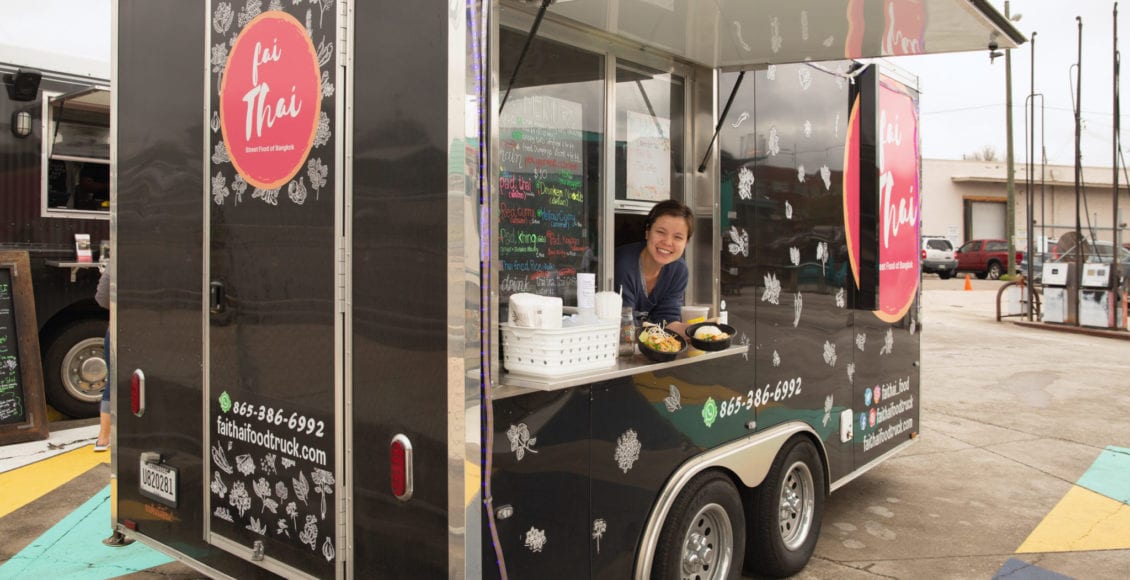 What was once a construction rental lot, is now a food truck community. Owners Alden and Scott Larrick moved to the area from Austin, Texas in 2016 and noticed that something was missing. In their hometown, food truck parks were common and they wanted to bring that concept to Knoxville. “We hoped to create a casual, come-as-you-are neighborhood hangout,” Alden says. Officially opened in February 2018, the park is a family-friendly, dog-friendly outdoor space with a rotating cast of 25-30 different food trucks and also features a bar with many beers, ciders, seltzers, and non-alcoholic beverages. The park operates rain or shine thanks to a large covered seating area. Their schedule of trucks, events, and updates is available at knoxfoodpark.com.

Father-daughter duo Dave and Allie Goldschmitt started Ale’ Rae Grill in the winter of 2017. With Allie’s background of cooking for mostly international students and athletes for the past 20 years, she and Dave have put together an eclectic menu of “street food with a gourmet face lift.” Allie says they enjoy the freedom of traveling and experiencing new atmospheres. In addition to the food truck, they run Ale’ Rae Grill & Bar located on Ball Camp Pike and offer catering. For a complete schedule of all locations, visit arggourmet.com.

Stick in a Box

“Everything is better a on a stick,” according to co-owner Neil Harkins. He and Eric Schoenholz both come from a background in the food service business and have recently celebrated the one-year birthday of Stick in a Box. As you can imagine, they offer signature chicken, beef, shrimp, and sausage kabobs. But uniquely, they also serve up sliders, sandwiches, wraps, and even desserts stick-style. The co-owners pride themselves on staying open year-round. “We serve several call centers and office parks where people work year-round, so we would be doing them a disservice if we shut down.” Find them on Facebook for events and their next locations.

Serving up dishes that are inspired by the streets of Bangkok where she grew up, Thailand-native Fai Kultida Blais loves to feed people. In July 2018, Fai and Nathanael Blais took a limited budget and turned it into a successful two-man operation. Cooking is in the bloodline of Fai’s family and she uses traditional recipes that have been passed down. Fai Thai is open year-round and their menu, along with their schedule, can be found at faithaifoodtruck.com.

In the spring of 2016, Jack and John Human, and Andrew and Eric Kinder began experimenting with making sausage. The four have worked in the food industry since they were teens. While cooking together weekly for a group of friends, they found that they enjoyed putting menus together. The food truck idea sparked and they began to explore cuisine options. They wanted to offer something that wasn’t available in the Knoxville area, and thus, Knox Wurst was opened in June of 2018. Knox Wurst is rolling spring through the fall serving their craft sausages and toppings. Checkout knoxwurst.com for their calendar and menu.

Penne for Your Thoughts

In one short year, Penne For Your Thoughts has received the People’s Choice Silver Knife award from Taste of Turkey Creek 2018, as well as Knox News Sentinel’s Best Food Truck of 2018. Co-owners Geoffrey Bernstein and Samantha Wallenstein are blown away by the overwhelming response. Their inspiration comes from being able to connect with the people of Knoxville. By having the advantage of being mobile, they are able to explore new locations. “We love making people happy and laugh with our ‘punny’ menu, and getting to know our customers gives us great joy.” Specializing in family-friendly Italian-American fusion food, you can find their schedule at pennetruck.com as well as on social media.

It’s hard to miss the sombrero and outgoing personality of Duncan Trout. The owner of Captain Muchachos, Trout decided that starting a food truck would be a great way to challenge himself after graduating from UT. He says the best part is that you get to set your own schedule. “Food trucks can be very seasonal, and if you place yourself in the right events during Tennessee’s beautiful spring, summer, and fall seasons, you can take an extended break in the wintertime.” Checkout Captain Muchacho’s Facebook and Instagram to see where you can try their fresh made-to-order Cali-style Mexican cuisine.