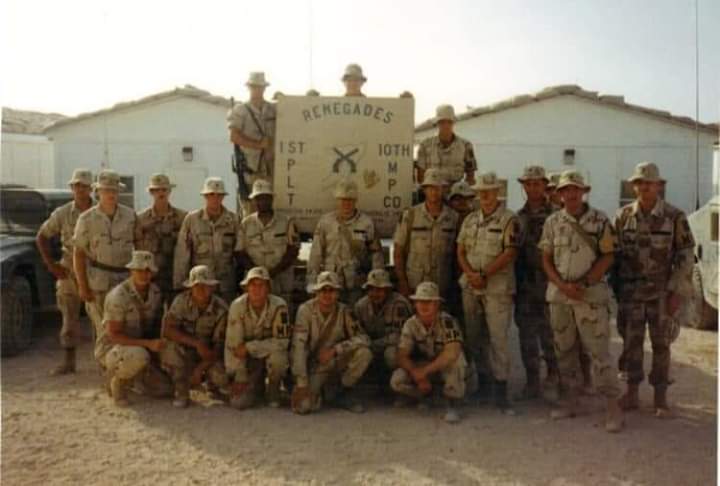 From Mogadishu and Port-au-Prince to football and wrestling, Jason Bush is giving back.

Jason Bush’s enlistment started in a familiar way. At the end of high school, he did not want to attend college, nor did his family have the means to send him. Instead, Jason reached out to the Marines and the Army to find out what each branch of the military would be able to offer him and ultimately enlisted in the Army. And so, in October of 1992, he left for basic training and Military Police School at Fort McClellan in Alabama. From there, he was stationed at Fort Drum in New York where a world of uncertainty waited for him.

Upon Bush’s arrival in Fort Drum in the spring of 1993, his unit, the 10th Mountain Division, wasn’t doing much in the way of typical military work. “We literally broke ice on sidewalks” for two weeks. He adds, “to top it off, it was just after the Blizzard of ‘93.” The unglamorous work provided little pretext of what was soon to come.

Meanwhile in Somalia, unrest and violence were becoming more and more commonplace as the country’s civil war reached high intensity. The United States forces were undertaking an operation called Operation Gothic Serpent, one of the main purposes of which was to capture Mohamed Farrah Aidid, the leader of the political group the Somali National Alliance. Just months after signing a disarmament agreement, Aidid’s forces killed 24 Pakistani soldiers, leading to more unrest in Mogadishu and a United Nations resolution calling for the arrest and trials of those involved in the massacre.

In October 1993, Bush’s platoon was on an MK-19 range when his battalion commander called them over and informed them they were being deployed to Mogadishu, Somalia. That same day “when we arrived at the barracks, we turned on CNN in time to see American soldiers being dragged through the streets of Mogadishu,” he recalls. Just over a week later, he was on his way there.

“Upon arrival in ‘the Mog’ we came off the plane ‘hot’, meaning the guns were mounted on our trucks and we were ready for anything,” he remembers. “During the next several months, my platoon was involved in several hostile situations. Quite a few come to mind, but I only really talk about a couple.”

In sudden breakouts of violence “I guess the initial reaction would be shock,” Jason says. “But then your training kicks in and you just react. We had three team members per vehicle — driver, gunner and team leader. Each had a specific role in any situation,” giving each team member room for some type of survival-mode clarity.

The Battle of Mogadishu, which inspired the book and film Black Hawk Down, became one of the most infamous battles of the Somali Civil War, with casualties and carnage the likes of which had not been seen in any American conflict since the Vietnam War. Its fallout led to even more devastation and unspeakable atrocities in the area, much of which Jason had to witness firsthand. “It included receiving sniper fire, ambushes and riots,” until, finally, he was sent back to the United States at the end of the conflict some six months later.

The excitement, so to speak, did not stop there. In September 1994, Bush’s entire platoon was again given orders to deploy, this time to Port-au-Prince, Haiti. There they “were in a few hostile situations,” he says, “but nothing like Mogadishu.” Instead, his platoon did crowd control to prevent riots and patrolled the mountains. He was later recalled to Fort Drum where he completed the rest of his military service doing regular Military Police duties, like patrolling the base and training for future deployments, ultimately leaving the Army in September of 1997.

Upon his return to civilian life, Jason got involved in announcing the women’s semi-pro football team, the Knoxville Lightning. “That led to announcing for the East Tennessee Lightning men’s team, which led to ownership of the East Tennessee Bombers,” another semi-pro football team. During his experience within the sports community, he made several important contacts,  one of which was Mike Goins. “[Goins] was going to play football for us, but decided to pursue other ventures.”

One of these other ventures was independent wrestling promotion. “Mike contacted me because he was familiar with my business management with the Bombers. He asked that I join him as an owner of the wrestling promotion enterprise. We discussed things and Xtreme Mountain Wrestling Alliance was born.”

XMWA has since become popular in the region, having many well-attended events throughout the year. “It’s really just a hobby,” Jason concedes, “but it’s fun and the fans enjoy it so we continue to do it.” Its popularity is quite apparent when attending the events and watching the videos online. The raucous environment rivals that of large arena wrestling events, although the crowds at XMWA events are perhaps even more involved. The events also give back to the community, with the group hosting a benefit match to raise money for a child who had recently had a heart transplant.

The hard work he has put into his civilian life doesn’t end there. Jason has taken his ability to bring people together and used it to take care of something from his past. His own experiences with war and the toll it takes on a person, coupled with the lack of resources for some veterans, led him to create A Veteran’s Heart, an organization he started with the goal of helping troops that have returned from war.

“It started because I wanted to help veterans suffering from PTSD, anxiety, depression,” he says, almost out of a sense of duty. And Bush says the goal of A Veteran’s Heart is “to eventually become a nonprofit,” but this distinction doesn’t seem to matter too much to him. Instead, he sets his sights on the bottom line — helping veterans, saying “In reality I just want veterans to know that there is someone to talk to, a place to keep up with statistics and see some humor after the hell we went through.”

And so, on the 22nd of every month, Jason and an ever-evolving group of veterans meet up and have a place to relate to one another. “We just hang out and chat, drink coffee and eat donuts. It’s growing and I love it.” They share stories and talk about the things they have seen and had to do, but the group also provides some normalcy for these men. The Veteran’s Heart Facebook page is full of humor about deployment life and discussions on how much better we could and should be treating veterans. Jason has given them an environment of understanding. Some things you just have to experience to get.

You can tell it means a lot to him to give back to the same people he fought alongside, or his predecessors and successors of wars before and after him. Its expanding reach is undeniably an earned point of pride. None of his fellow soldiers from the days in Mogadishu or Port-au-Prince have dropped in yet, “but nothing has surprised me,” he says.

But if one of them did walk in, it’s safe to say he would find a place of acceptance, fun and help — or, at the very least, a feeling of community and camaraderie reminiscent of their military days.

Five nearby state parks that are open for visits