Gov. Bill Haslam: Political Options, but the Air Is Thin 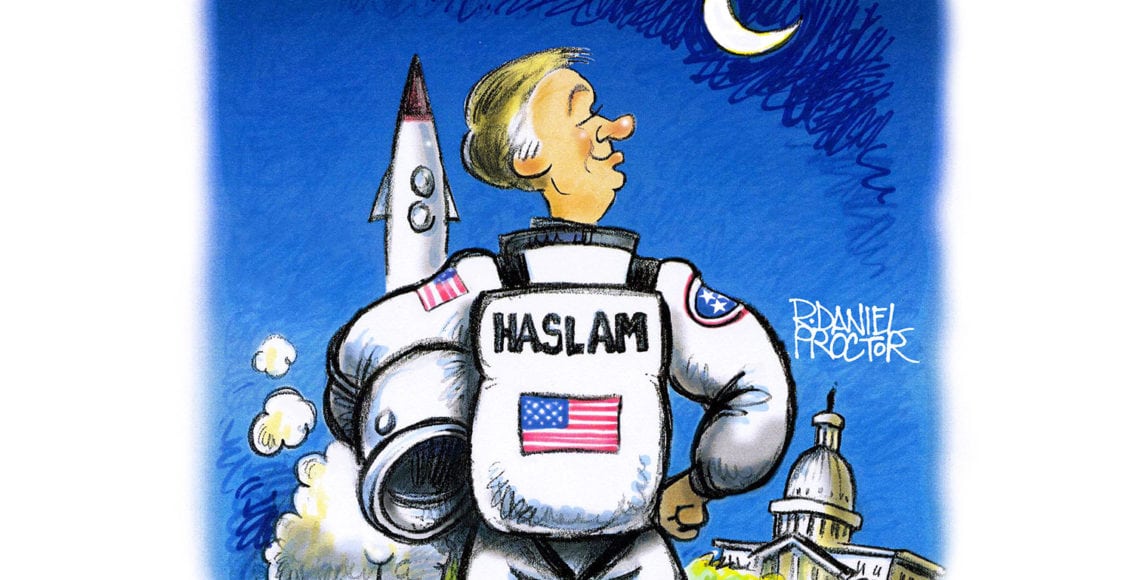 He isn’t ruling one in, either. Yet. But if he wants to stay in elected office he doesn’t have many options. As with oxygen, the political options tend to thin the higher one goes.

Haslam has been a popular governor. Last May, Morning Consult, a non-partisan digital media and research company, pegged Haslam’s approval rating at 62 percent among registered voters it surveyed, just a one-point difference from 2015.

With a fortune estimated at $2 billion, Haslam—tabbed in Feb. 2015 by Forbes magazine as the “richest politician in America”—could be doing something other than dealing with the Tennessee General Assembly or potentially diving into Washington’s political swamp.

Nevertheless, he’s gone from Knoxville mayor to Tennessee governor. Realistically, he has only three political landing sites: (apart from an appointment to a senior federal position): U.S. senator, vice-president, or president.

If Bob Corker or Lamar Alexander step away from their U.S. Senate seats, Haslam is positioned.

He certainly has plusses, chief of which is his aforementioned fortune, particularly in a senate race. Haslam could self-fund a campaign. In politics money doesn’t talk: it yells, screams, jumps up and down, and can intimidate the stuffing out of a Thanksgiving turkey.

But if there’s one thing about which Haslam doesn’t like to talk, it’s money. One of his first acts after taking office in Jan. 2011 as governor was, as the Associated Press reported, disclosure-related: “NASHVILLE — Gov. Bill Haslam on Saturday signed an executive order that eliminates requirements for the governor and top aides to disclose how much they earn in outside income.”

Haslam’s argument is that essentially everyone knows he’s rich and to reveal too much about his finances would affect other members of the Haslam family. The governor’s father, Jim Haslam, founder of Pilot Corporation, is Knoxville’s biggest business and philanthropy name. The governor’s brother, Jimmy Haslam, is CEO of what is today Pilot Flying J, north America’s largest travel center and travel plaza operator, and owner of the NFL’s Cleveland Browns. The family doesn’t lack for discretionary income.

Haslam’s elections show that Tennessee voters aren’t grumpy about how rich he is or that he won’t share details. Therefore, money isn’t a harmful factor in a senate race.

But adhering to such a close-mouthed policy would make things messy were he to reach for one of the country’s two top jobs. The news media would pound the easygoing governor over his financial information, not to mention the fact that the family money is oil-related.

In February 2013, Politico wrote on the “GOP star you’ve never heard of,” saying that “while attracting scant national attention and eschewing the camera-friendly approach of most up-and-coming Republican governors, Bill Haslam has amassed one of the most extensive conservative governing records in the country.”

He pushed for Insure Tennessee, what many Tennessean Republicans saw as a state extension of Obamacare. Worse than pushing for it, he failed to get it passed, which means he irritated his base for no reason.

Following the release of a 2005 tape of President Donald Trump’s crude remarks about women, Haslam called on Trump to withdraw as Republican presidential candidate and allow Mike Pence to run in the top spot. Trump did not withdraw—and won. A percentage of his 61 percent support in Tennessee is likely to have long memories.

A rock-ribbed conservative with boatloads of cash could give Haslam a race for U.S. senator if Alexander or Corker depart. Term limits will in two years end Haslam’s gubernatorial career. A senate seat would keep him relevant for a possible 2024 national race.

Haslam has plusses, minuses, and options—even if the air in any direction is a bit thin.