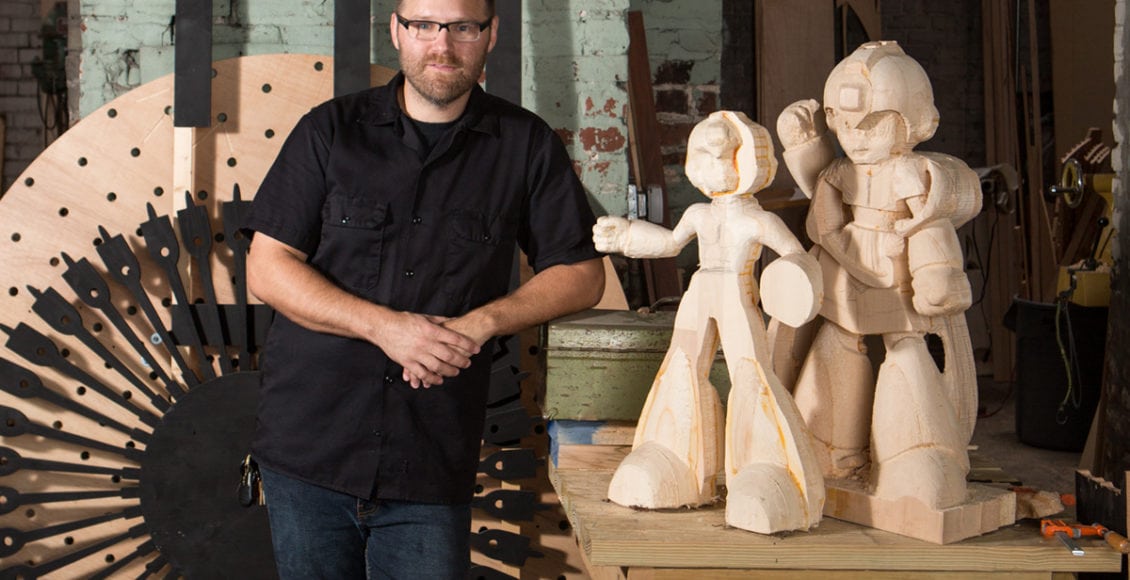 Currently an Assistant Professor of Art at UT, Knoxville, 2016 Guggenheim Fellowship winner John D. Powers realized his love for sculpture during his studies at Vanderbilt University. His work explores contemporary culture while seeking to memorialize the past, all the while discovering ways to infuse motion into his sculptures.

“I kind of stumbled around…I liked everything I was studying, and then took a studio art class—it was a therapeutic elective from all the statistic classes I was taking. The next semester I took sculpture, and that solidified everything.”

Currently, John is working on pieces that explore death and how we memorialize it. Drawing from his travels in Turkey and Japan, John is creating two very different sculptures.

One, called “Tumulus,” is a black circle that “moves the way kelp moves but in an undulating circular path.” This artwork uses motion to explore one of history’s earliest burial markings.

His other piece fuses videogame icon Megaman and traditional Japanese mythology. During his recent travels, he witnessed giant stone heads at a royal burial site, and it turned his thoughts towards Megaman, whose “lives” are represented by giant heads.

Powers has two upcoming shows: in October at the Downtown Gallery show of UT’s Time-Based Art faculty; and in January, a solo show at Austin Peay’s new arts center. To see more of his work, visit john-powers.com.

With a passion for arts, music, craft beer, and good food, Jacob Rouser has a curiosity for all that life has to offer. Having graduated from Maryville College in 2012, Rouser has spent his time in the digital marketing space helping companies discover and tell their stories. When he’s not in the office, you can find him out on the disc golf course, exploring the city, or spending time at home honing his cooking skills. Rouser enjoys discovering what makes people passionate and bringing a voice to the stories that would otherwise go untold.