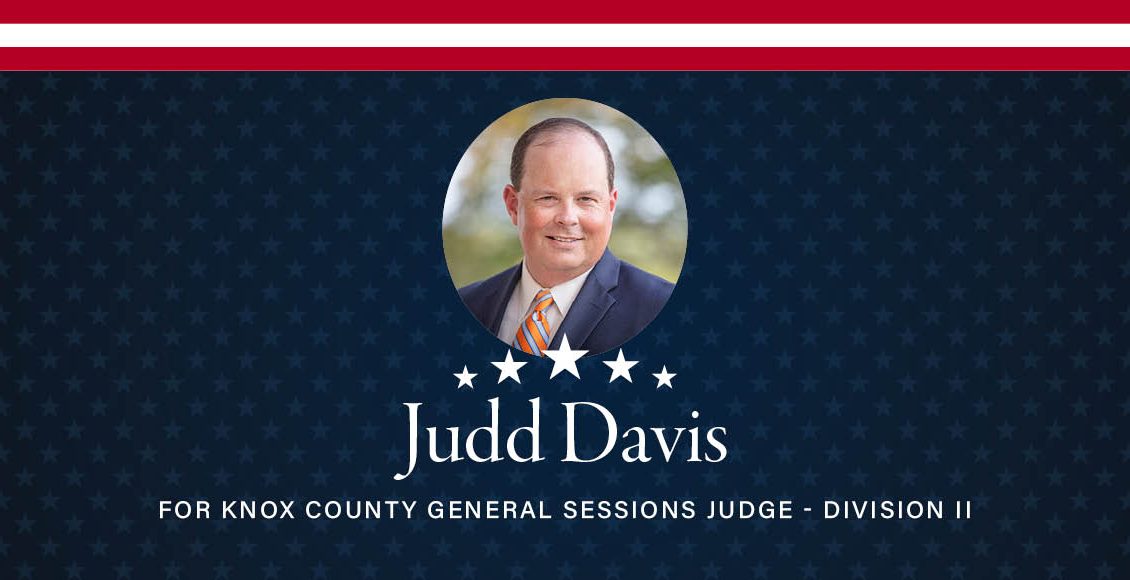 Judd Davis is dedicated to serving the people of Knox County. A family man, born and raised in Knoxville, Davis has spent the last few decades helping Knoxvillians navigate the court system, representing them in both criminal and civil matters, serving as Assistant District Attorney, and bringing fairness and justice to the courtroom as acting Knox County General Sessions Judge.

What do you bring to the bench in general sessions court?

This court is where most people will have their only interaction with the court system. It’s important that they know that no matter what, if they’re represented by a lawyer or not, a victim or a defendant, they’re going to be given the opportunity to be heard and treated fairly, no matter what situation they’re in.

What about your background makes you the optimal fit to serve this court?

I have that criminal and civil experience from my private practice as a lawyer. And I also have the experience as a prosecutor and as a defense lawyer.
I am well-rounded in this regard. Even as a student studying the law, I worked at the public defenders office, investigating, dealing with the public, and understanding administrative law. There is so much in my background that has equipped me to serve this court..

you’ve been vocal about the importance of recovery court and its programs, haven’t you?

Yes. I do think that drugs play a huge part in many of the crimes that we see. I think it’s important that we try to do something a little different in order to see if we can get the results that we need to get to keep folks from being stuck in the cycle.

Sometimes we argue in the recovery court, but mostly we’re all there to come up with solutions for the problems for individuals. In every case, we provide a certain level of treatment, a certain level of supervision, and, in some cases, housing, to help provide a good environment that’s going to foster that individual’s recovery, not put them back in a situation where they would just fall right back into their old habits again.

does mental health play a role in this work?

I think it plays a big role. There are a lot of stakeholders that are working towards trying to find some solution for the folks who have mental health issues, either alone or in addition to substance abuse problems. I look forward to there being a mental health court in the future, in the same vein as the recovery court, but in the meantime, we are trying to find quicker solutions for folks that are in that situation.

how do you approach this delicate work?

You have to handle these on a case-by-case basis. You have to be compassionate and work hard to understand where each individual is coming from when they do what they do.

How does the local Bar play a role in supporting the success of those who find themselves in general sessions court?

I think the lawyers in our local Bar have always been able to get along very well. When they’re not in the courtroom, they understand that ultimately, we are there to support the citizens of Knox County. And even though we may disagree in court at times, this general civility amongst the Bar is important. It’s important to me, but it’s also important to the way that our court system is able to function here.

Having had the experience of practicing in other counties and jurisdictions all across the state, I think it’s something that’s done very well here, and I think we need to keep it headed in that direction.

A Voice for the People of Knox County