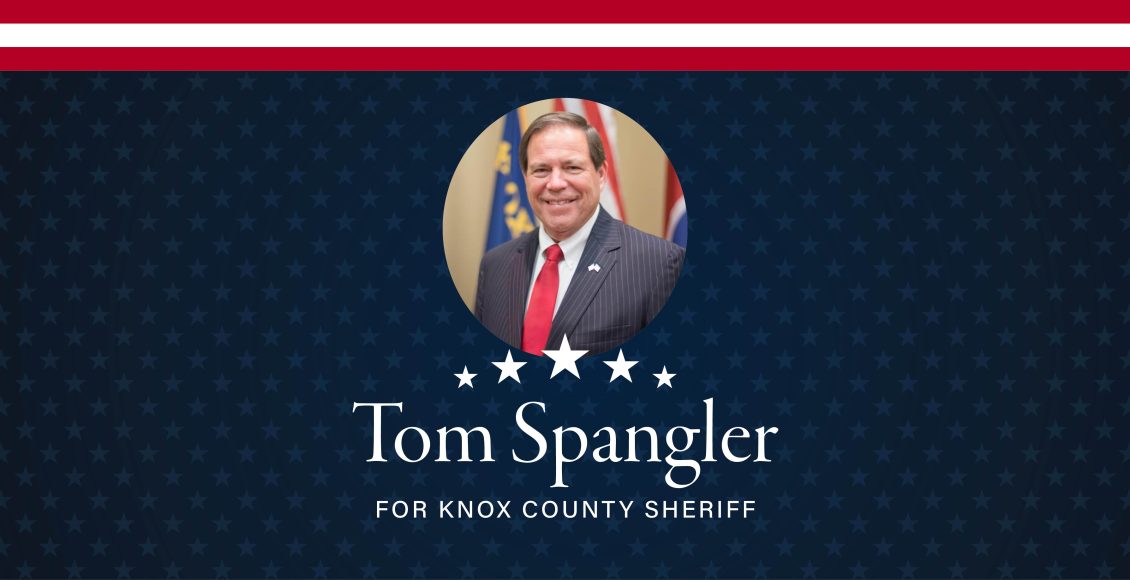 Why did you decide on a career in law enforcement?

After graduating High School, I joined the United States Air Force. It was there I was exposed to law enforcement. I spent some time assisting a local agency where I was stationed and eventually received cross-training in law enforcement. I knew when my time in the Air Force was over, I wanted to be a police officer. I was hired at the Knox County Sheriff’s Office in 1980 as a corrections officer. It was an honor to serve my country, and it is an honor to serve Knox County.

Did you ever think you would eventually become sheriff?

It was a goal. I’ve always tried to work hard and excel in my career. I’ve done almost every job at the Sheriff’s Office from corrections, patrol, patrol supervisor, detective, metro narcotics, training director, aviation, and served as chief deputy alongside two different sheriff administrations. When I decided to run for sheriff, I never imagined winning with 65 percent of the vote. It was one of the most humbling moments of my life. It has, without a doubt, been the highest honor of my life.

What are some things you’ve accomplished as Sheriff in the last three-and-a-half years that make you proud?

The first thing I did was take our patrol officers off 12-hour shifts. It was putting our citizens and our officers at risk. The officers’ home lives were suffering; they were exhausted mentally and physically. When you have an officer in a patrol car answering calls for service, some of which are very dangerous, that’s a safety issue for everyone involved.

When I took office as sheriff, we had 16 assistant chiefs and a chief deputy. That is far too many for an agency our size. As those folks retired or resigned, I utilized the salaries to create more corrections and patrol positions. I felt that was a better use of taxpayer dollars. We operate multiple facilities and manage approximately 900-plus employees with nine assistant chiefs, a chief jailer, and a chief deputy.

My administration and I have been successful in working with Mayor Jacobs’s office as well as County Commission to get pay raises and or bonuses for our men and women. It’s not been near what they deserve or even what I initially asked for when putting in my budget request, but it is a step in the right direction. One might ask why this is important to the citizens of Knox County. It’s important because, with better pay, we can hire and, more importantly, retain highly qualified, experienced law enforcement professionals. It’s important who is protecting our citizens. Therefore, I will continue to advocate for better pay and more competitive pay like our sister agencies. Our men and women are worth it, and the citizens depend on them.

I also brought back the drug education program known as D.A.R.E., which had been out of our Knox County Schools for several years. With drug use and addiction at all-time highs, I felt it was imperative to get in front of it by educating our youth about the dangers associated with drugs. I could not have made this happen without our dedicated men and women and the cooperation of the Knox County Schools administration and teachers.

Several vital programs had gone away through the years. The Knox County Sheriff’s Office Explorer program is where youth age 14-plus are exposed to different aspects of law enforcement. The Citizens Academy is a great way to bridge the gap between our community and law enforcement professionals. We’ve also worked on recruiting and training new SCAN volunteers. SCAN is the Senior Citizens’ Awareness Network. We have folks trained to visit and check on our elderly in Knox County. With our aging population, this program is essential for those who live alone and have no family.

How did the covid-19 pandemic affect your agency?

We, like everyone, felt the effects of the pandemic. However, we never closed. When a citizen calls the E-911 Center, they’re expecting someone to respond to their emergency or non-emergency call. I can’t say enough how proud I am of our employees at the Knox County Sheriff’s Office. They did a phenomenal job despite the uncertainty they, too, were faced with. We continued to answer all calls for service when others were responding to emergency calls only. Everyone stepped up and did so with professionalism. We are blessed to have some of the best employees at the Knox County Sheriff’s Office.

What is one of the biggest challenges you face as sheriff?

Retention and recruiting. We have local agencies offering higher pay for new recruits and lateral transfers. Recruiting for law enforcement is at an all-time low. According to the National Police Association, Inc., police departments across America are struggling to retain and recruit officers. Despite what you might hear, it’s not just the Knox County Sheriff’s Office; it’s all across our country. Many are leaving the profession altogether. It makes doing our job difficult. The workload increases as our population increases while our workforce is decreasing. It’s challenging.

Sheriff, why are you running for re-election?

In my next term, there are many goals I hope to complete with the incredible folks at the Knox County Sheriff’s Office. My focus will always be on citizen safety and the safety of our children in our schools.

We have already begun working on ways to bridge the communication gap between law enforcement and the community. Our most significant accomplishment has been our new interactive website where a citizen can send a message or email to various divisions inside the Knox County Sheriff’s Office. It also has some incredible crime mapping abilities. People can sit in their living room and view the types of crime happening in or around their neighborhoods.

We have implemented several crime prevention programs to include crime in the workplace seminars and programs for neighborhoods and churches.

I’m proud of the work we are doing for our senior citizen community, particularly with SCAN. We have also launched our elder abuse unit, part of our family crimes unit. Its focus is to arrest individuals who prey on seniors and provide valuable program resources for seniors from aiding them with necessities such as food, shelter, help with bills, and education on preventing becoming a victim of fraud.

Ultimately, I want to leave the Knox County Sheriff’s Office better than when I first took office.

I will continue to work with county commissioners to advocate for better pay for our men and women which will mean we can retain experience. I want to ensure there are more front-line workers on our streets in detective units and our corrections facilities. I will diligently work toward these goals in the next four years.

It has been the greatest honor to serve as Knox County Sheriff. I’m looking forward to the next four years.