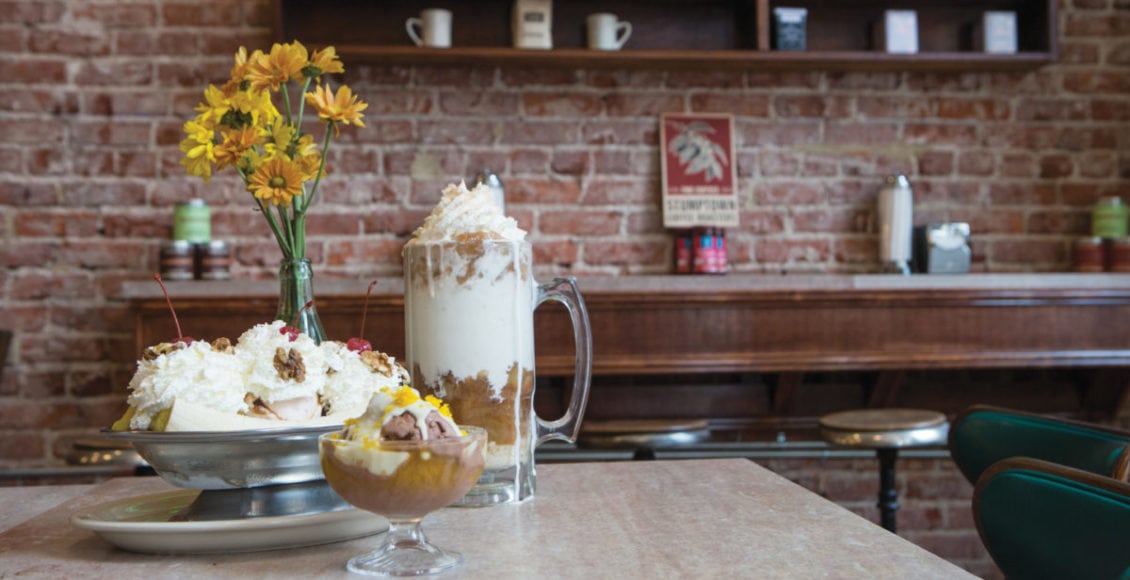 Return to a seemingly simpler time when sweet treats and good service went hand in hand, and experience a little piece of local history at one of Knoxville’s pharmacy and soda fountains. Originally, soda fountains were built inside local drugstores during the early 1900s to add convenience for customers. During prohibition, people often used soda fountains as a way of socializing since legal bars were no longer in business. While soda fountains don’t have the same presence they once did, these local soda fountains continue to keep the history alive.

The Phoenix Pharmacy and Fountain

All of the menu items are handmade with fresh ingredients from local farms and markets to ensure an authentic experience. Phoenix believes that there is no greater satisfaction than serving ice cream to someone who thinks it is truly amazing. If it’s your first visit, make sure to try the Classic Brownie Sundae: two scoops of vanilla bean ice cream on top of a warm chocolate brownie, covered in hot fudge, topped with fresh whipped cream, chocolate shavings, and a maraschino cherry. For those looking for a more gourmet treat this fall, try the 38 Special: one scoop of chocolate ice cream covered in a white chocolate shell surrounded in sweet orange juice with orange shavings on top.

Offering more than just milkshakes, The Jefferson Fountain adds a piece of local history to every meal served. The Jefferson Fountain originally opened in 1944 under a different name and is now named the oldest pharmacy and soda fountain in Oak Ridge. This pharmacy offers traditional sweet treats and soda fountain eats with an Oak Ridge secret city theme like the Fatman Burger: an 8oz bacon cheeseburger, or the Littleboy: a 4oz bacon cheeseburger. Jefferson’s most famous burger is the very special Myrtle Burger, a 6oz burger with everything on it, named after a woman who worked for Jefferson Fountain for 44 years.

This historical icon represents more than just a traditional pharmacy and soda fountain. The oldest family-owned, family-operated drug store and pharmacy in East Tennessee is Clinton’s very own Hoskins Drug Store. Hoskins opened in 1930 and has been operated by the same family ever since. The family friendly restaurant maintains a close relationship with each customer whether they are a regular or from out of town. Try a Hoskins’ classic like the Hoskins Burger: homemade pimento cheese and grilled onions on top of two hamburger patties. And you can’t go wrong with one of their homemade desserts, like the Coconut Cream Pie or the Banana pudding: warm banana pudding topped with traditional meringue—just how grandma makes it.

The perfect pharmacy and soda fountain for the whole family is Long’s Drug Store. Regulars have been coming back for Long’s family-oriented atmosphere since 1956. This traditional style restaurant serves up favorites like old-style cheeseburgers and sandwiches or the Homestyle Chicken or Tuna Salad, made daily with fresh ingredients. For breakfast, try the Country Ham served with gravy and biscuits. And make sure to taste one of Long’s classic milkshakes, made with an authentic shake machine.

As a senior at UT, Ashley spends most of her time focusing on her future and, like any other college student, the little spare time she gets is usually used for napping. After writing for The Echo and now Cityview Magazine, her passion for writing is growing. Ashley’s goal is to land a job at a popular magazine one day.