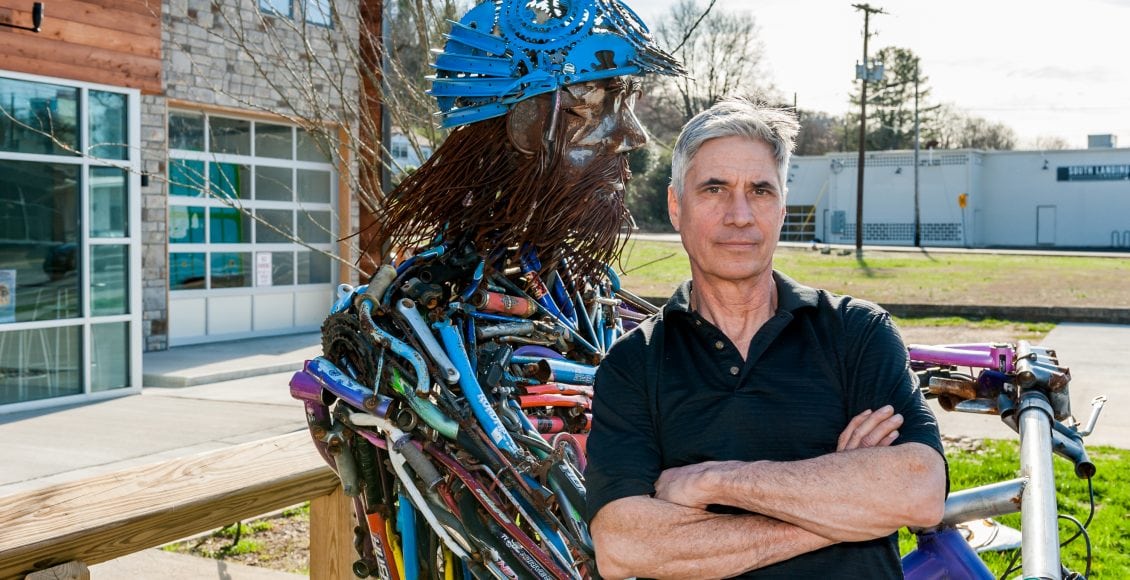 With a passion for shaping spaces and constructing stories, Kelly Brown of Bower Bird Sculptures is as connected to building with nature as his company’s namesake. Since childhood, he has used his hands to shape the world around him. For him, art “…has always been more than just actually looking at an object – there is some kind of interaction with it.”

His twigloos, for example, take an unwanted, invasive shrub, privet, and repurpose it into igloo shaped domes through which kids can run and play. These twigloos have appeared in various places around Knoxville, including Ijams Nature Center.

His love for repurposing materials is clear. To him, each piece guides his art, “this shape here and this color there…you’re making things with these parts and they’re speaking to you at the time.” Brown also created the Bicycle Arch at the entrance of the Greenway at the Outdoor Knoxville Adventure Center, the mountain biker sculpture for Alliance Brewing, and the winged boar that guards the still on top of Scruffy City Hall.

The boar isn’t the only sculpture that Brown will be bringing to life in Knoxville. He plans to start work on his own version of Rodin’s Thinker called The Digger. Having gathered old plows, shovels and pick axes, Brown hopes to echo Knoxville’s own story of breaking new ground and building something new.

Kelly Brown will be showing at an upcoming First Friday. You can find him at facebook.com/BowerBirdSculpture

With a passion for arts, music, craft beer, and good food, Jacob Rouser has a curiosity for all that life has to offer. Having graduated from Maryville College in 2012, Rouser has spent his time in the digital marketing space helping companies discover and tell their stories. When he’s not in the office, you can find him out on the disc golf course, exploring the city, or spending time at home honing his cooking skills. Rouser enjoys discovering what makes people passionate and bringing a voice to the stories that would otherwise go untold.

We All Have Willpower