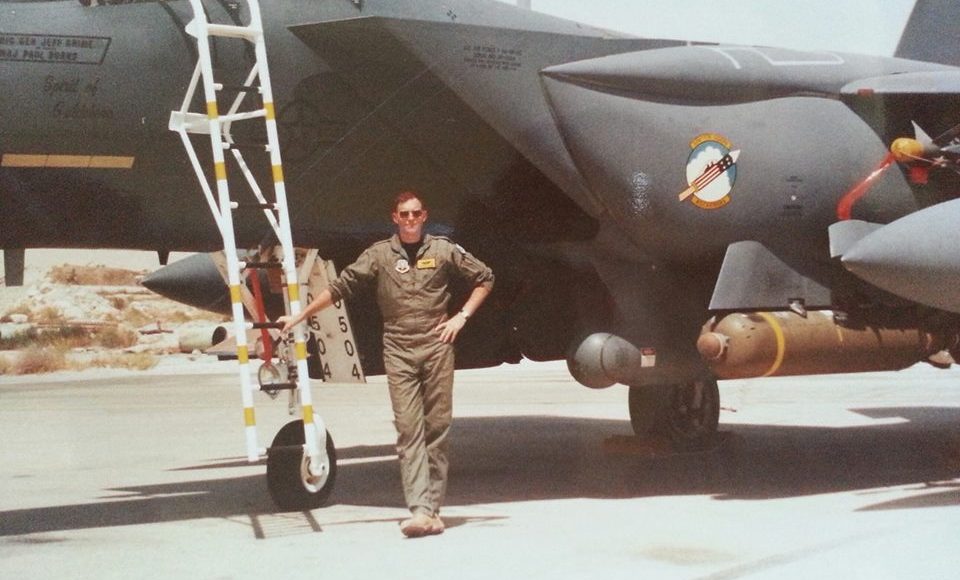 Owen Ragland followed his father into the Air Force and led all three of his children along the same path. The frequent moves the military requires can be challenging, especially for the spouse who is organizing them and managing the household while his or her mate is deployed, he says. But the experiences he and his family had in different countries and cultures more than made up for the inconveniences.

Ragland was in Germany, for instance, the week the Berlin Wall came down. Later, his wife and children saw much of Europe while he was stationed in England, thanks to short trips via low-cost airlines. Even later, he met with high-level officials in both Israel and Syria as he studied the Middle East.

“My kids got to see other cultures and learn about their traditions and languages. It made an impression on all of them.

“It was a good life for our family,” he says, referring to his childhood, though clearly, it was good for the family he fathered as well.

Ragland’s path into the Air Force started at the University of Tennessee, where he joined the AFROTC program. After earning a degree in engineering, he attended flight school in Del Rio, Texas. Then he was asked to be an instructor there. He stayed for four years.

“I started on the T-37, which was sort of like a VW Beetle with wings,” he says. “Then I became an instructor on the advanced trainer, the T-38, which was more like a Corvette – supersonic, very aerodynamic.”

His next assignment took him, his wife Leslie, and their young family to England, where he flew an A-10 as the Cold War came to a close. “It was a big, ugly airplane; a Gatling gun with wings,” he says. “It flew low and slow.”

Though he was stationed in England, he frequently was dispatched to Germany and recalls the excitement as the Berlin Wall came down. “There was a lot of uncertainty about what was going to happen,” he says. “The people in East Germany had been oppressed for so long. Their infrastructure was failing. But their government promised they would rebuild East Germany, and the German people have such a strong work ethic, and they did. I have very fond memories of being there.”

Then it was on to Arizona, where he trained on another fighter jet and then upgraded to instructor; then on to North Carolina, from which he was deployed to the Middle East. In North Carolina he trained Jeannie Leavitt, the first female fighter pilot, in 1993.

Next was Air Force Headquarters in Virginia, where he kept track of excess aircraft at bases around the world and had them moved where they were most needed. Then back to England for another three years as an instructor flying fighters and with children old enough to understand the benefits and sacrifices that come with a military career. All three chose to attend the Air Force Academy in Colorado Springs, Colorado.

“My son is flying drones in New Mexico, though he is currently deployed,” he says. “My oldest daughter studied Russian and was a nuclear missile crew commander. She is now an intelligence officer. And my youngest daughter studied French and political science with an emphasis on Africa and served as a personnel officer. She has since left the Air Force, but her husband is on active duty in Mississippi.”

The Raglands have four grandchildren, too young to enlist just yet.

As his career continued, Ragland attended the Air War College at Maxwell Air Force Base in Alabama, earning a graduate degree in strategic studies. Students there specialize in one region of the world, and Ragland’s was the Middle East. He visited both Israel and Syria, meeting with military, political, and industrial leaders to understand the myriad and longstanding issues that confront the region.

When it comes to understanding the Middle East, he says, “It all comes back to Iran. That is the country in the Middle East that pulls all the strings. We tend to underestimate them, but they are very politically astute and they have lots of engineers. It’s very complex. It’s hard for us, as a 250-year-old country, to have an appreciation for issues that go back thousands of years. They view things through a different lens.”

As Ragland climbed the ranks to colonel, he absorbed leadership skills from officers with every new assignment.

“I watched every leader that I had, from the time I was a lieutenant to a colonel. I learned what I wanted to do and what I didn’t want to do. I really appreciated leaders who addressed rumors. They knew the danger of rumors in an organization. We knew they would give us one of three answers: I’ve heard that and here’s what going on; I’ll find out; or, I’m not at liberty to say. If your leaders do that consistently, you know what’s going on and you trust them to tell you what you need to know.

“I learned to be a problem solver in a dynamic environment. You study and study to do your job, but when you deploy in a combat situation, you have to take the best of what you know and figure out how to solve problems. It’s assigning and assessing risk.”

If Ragland’s first 18 years in the Air Force were about flying, his final eight were about training officers. He concluded his military career where he started it: back at UT as the AFROTC commander and professor of aerospace studies. He served there for three years before retiring. “It was a lot better sitting behind the desk than standing in front of it,” he says.

When UT played the Air Force Academy in football in the fall of 2006, Ragland organized a flyover and brought recruiters and general officers to campus. It was a positive experience for both Knoxville and the Air Force representatives who came, though UT did win the game. “My son was here for the game, and he was at the Academy at the time. He thought I should be cheering for the Academy to win, but I said, ‘Son, I went to school here and I work here. I’m a Vol. You can root for the Air Force!”

Back in East Tennessee, he and Leslie settled in Maryville and became active in First United Methodist Church. After leaving the Air Force, he served as director of a UT campus ministry for three years, then transitioned to working for a property management company. Now he is legal administrator for Kennerly, Montgomery & Finley, P.C. in Knoxville.

“I run the business operations and oversee the staff and allow the attorneys to be attorneys. It’s a big enough firm to have a lot of issues, but it’s small enough to have one person to deal with them.”

Ragland, 60, is also active in the East Tennessee Military Affairs Council, serving as president four of the past five years. The council gathers representatives of area military and veterans’ organizations for monthly meetings at the Knoxville Chamber office on Market Square to learn what each other are doing and see how they can work together. “If a unit commander says we’ve got people deployed, then another group will say let us work with their spouses to help them. It’s a great way to support our military and veterans,” he says. “Knoxville is a wonderful community for doing that.”

Though he’s still having fun at work and believes he has something to give there, he’s also looking ahead. “My buddies at church say they have a place for me with Habitat when I retire, and I will travel with my wife.

“I encourage people to see the world. It gives you an appreciation for what we have as Americans, what we’ve done as a nation, and who we are.”