David Dotson and Pete Owens helped coordinate a team of professionals who got the My People Fund up and running within 48 hours of the fires that stormed through Sevier County in Late November. 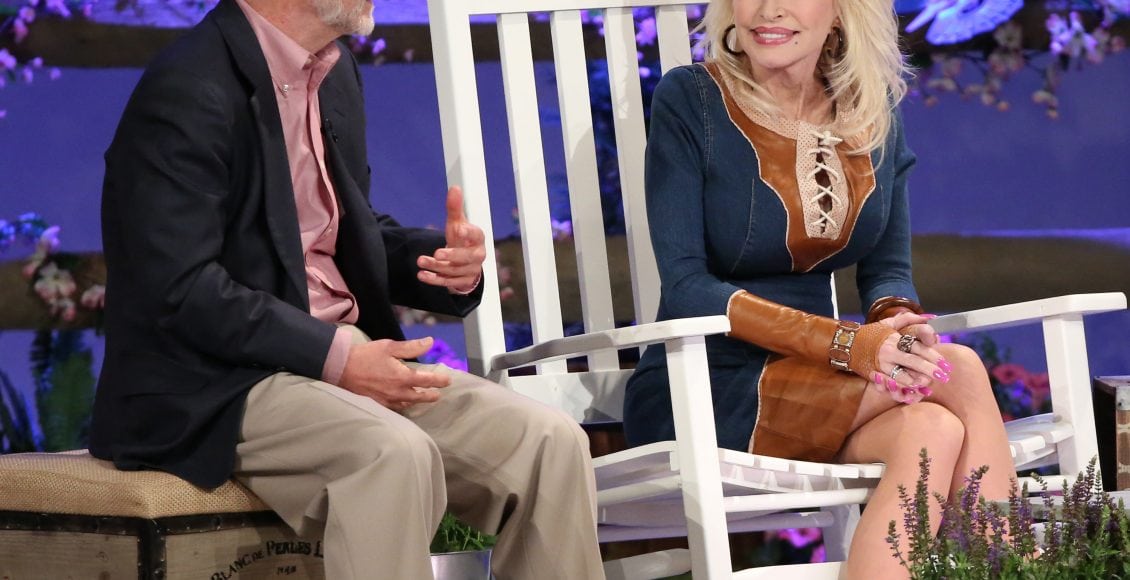 This is the story of how a committed group of people can help a community turn terrible tragedy into hope in a very short period of time.

It isn’t something that happens by accident. Not many organizations could have pulled it off, and this one is centered right here in East Tennessee. Dolly Parton’s success with Dollywood and the Dollywood Foundation is no fluke. She has the vision, and she has gathered around her the right people to turn that vision into a reality as clear, far-reaching, and beautiful as the view from Clingman’s Dome on a clear day.

This heroic effort was pulled off by a remarkable group of people, inspired by Dolly, but led by her long-term associates who have been running her entertainment and philanthropic enterprises for years.

It started with a shared vision, direct from Dolly Parton, that “we need to help the people who need the most help.”

According to Pete Owens, Director of Public Relations and Communications for Dollywood, “it would be one thing to write a check to an existing organization but it’s a whole other thing to try and create a mechanism in which money can be given to the people that need it directly into their hands. And that’s more of what she was looking to do rather than just write a check.”

When the Chimney Tops 2 Fire, as it is officially known, tore through Gatlinburg and surrounding areas of Sevier County on the night of Monday, November 28th, Dolly Parton and her team were watching. By 9:30 in the evening on Monday, Dollywood had evacuated its cabins and resort. They also had a team of people working to protect the resort, the theme park, and the water park. A group was already gathered that evening as an emergency response team and began speaking about recovery. On Tuesday, the group had preliminary conversations with Dolly, who in addition to touring, was in L.A. doing The Voice.

On Wednesday, November 30th, things really got rolling. According to Owens, “we had a meeting that started at 11:30 on Wednesday morning and by 1:30 we had the My People Fund planned and how what we wanted to distribute the money had all been decided.”

The My People Fund

The group that sat down on that Wednesday at 11:30 was composed of Owens; Dotson; Ted Miller, Business Manager and Partner of Dolly Parton Productions; Craig Ross, President of Dollywood; Amy Owenby, Vice President of Hospitality for Dollywood; and, of course, Dolly, who emphasized that she really wanted to be putting cash in people’s hands—$1,000 a month for
six months.

It took the group a little under two hours to sketch out the fund and what the approach would be. It fell to Dotson to pull it off. Making things happen is one of his main jobs at the foundation. As he says, “it wasn’t unusual in the sense of stepping away from the normal box of my role as the President of the Dollywood Foundation, but it was unusual in the speed in which it needed to happen and also the enormity of the task.”

The pace quickened after the meeting. That evening was the premiere of Dolly’s NBC special, Christmas of Many Colors: Circle of Love. She was finishing up her tour but said, “Hey, I think I can get a video done and maybe NBC will air it at the top of the show at 9.” Several things had to happen during those seven hours between the end of the meeting and the Premiere of Colors. Parton had to shoot the video—you can see it on YouTube—and Dotson had to determine how they were going to raise and distribute the cash.

The text of Dolly’s video starts with a familiar phrase: “Hi, this is Dolly.” The 83-second video is a simple straight-on shot of Parton talking to the camera, calling attention to the disaster, recognizing the quality of the emergency response, and establishing a fund to give $1000 a month to “…all those families that have lost their homes in the fires until they get back up on their feet.” It ends by asking for prayers and inviting the viewers to “visit our Tennessee mountains and experience the Tennessee spirit.”

To get a website and donor function running, Dotson called in SD Professionals, led by Jacob Timmons, which maintains the database for the Imagination Library—interacting with thousands of affiliates and millions of kids. The company, which also handles DollyParton.com and the Foundation’s website, was well-suited to handle the nuts and bolts of the online operation. Timmons created the page and the donation mechanism.

Everything was up and running and the right people knew what was going on by 7:00 that evening. However, NBC didn’t air the video at the top of its 9:00 broadcast. Within a half hour, the team switched to a social strategy and put the video out on Dolly’s social media. “The next morning we woke up to a million dollars,” says Dotson.

There hadn’t yet been any talk of a telethon.

The following weekend, as Dolly was headed into the final week of her Pure & Simple tour, the idea for a telethon began to come together. As Owens tells it, the notion “…started with a telephone call that Kirt Webster [Parton’s publicist] and I had. We had made the announcement on Wednesday after the fire about the My People fund, and the following Saturday, Kirt and I were on the phone and we started talking about opportunities to be able to raise some money for the fund to be able to help people out. Dolly’s said, ‘Let’s do a telethon, it’d be a great way for me to use my exposure to the world to see if we can get people to support the cause.’ So, Kirt and Danny Nozell [Parton’s producer and tour manager] and others got busy with everything from securing talent to setting up the phone bank.”

Many members of the team had produced television before, and Owens had produced local telethons, but he drew particularly on the experience of Scott Durand, who had led a national telethon when he worked at Great American Country. The basic details were ironed out over the weekend and in the week that followed. It was decided that Smoky Mountains Rise: A Benefit for the My People Fund would air on Tuesday, December 13, at 8 p.m. on an open feed, in partnership with Great American Country, Scripps, and iHeart Radio.

Owens’ team produced the telethon; meanwhile, Dotson’s team was still receiving funds coming in through the website and through the natural, organic exposure that kept building upon itself throughout the community, fueled a bit by ongoing news reports.

It was a challenging event to broadcast. “I think the amalgam that the telethon ended up being was an amazing blessing for all of us,” Owens says. “It was bigger than we thought it would be, certainly raised more money than we thought that it would, and just speaking from a television perspective, it was a really entertaining show. From a technical perspective, it was a really clean broadcast. Scott Durand put together a telethon dream team for us from various production companies in Nashville,” Owens notes. “They just created an amazing environment and professional environment for all that to happen.”

“It really was a magical thing. Everything fell into place the way it needed to fall into place to allow us to help these families. I think that it shows how big a heart that Dolly has and that her first thought was for her family and her people here in East Tennessee. It was all done for the right reasons. I’ve worked for her for almost seventeen years. She is an inspiring individual to work with and be around.”

After the Telethon: Care More

After briefly celebrating the success of the millions raised by the telethon on the 13th, Dotson’s team got to work. The following day, they had to train volunteers to distribute funds to families in need. The Care More Assistance Center had been established at the LeConte Center of Pigeon Forge, which donated their facility. Says Dotson, “Jeff Conners and Sam Roberts, who work with me, and Carol Agee from Dollywood, we were the team. We called ourselves the Incident Command Team, just because we wanted a fancy, military sounding name for what we were doing.”

There were three unknowns Dotson’s group had been working to prepare for in the two weeks since the My People Fund had been established: the number of families they’d be aiding, how they would vet those families, and how they would distribute the money as quickly and efficiently as possible.

Their main criteria were that Dolly wanted to help those whose primary residences had been destroyed. The team worked with city and county officials in those two weeks to confirm the destruction of or degree of damage to a residence. When a map was ready, they were able to set dates and put a pre-application on the website. They received over nine hundred applications that first weekend.

Using the map, they were able to more or less pre-approve approximately 700 applicants. They also created a second group called a “Resolution Team,” where volunteers experienced in social service work and dealing with problems could help people who weren’t immediately approved. “We were trying to get to ‘yes’ with people,” says Dotson. They followed a philosophy of respect. As Dotson told his team, “we can create our own program in two weeks and our own operation, and we can create our own culture where we treat people with respect.”

The operation went incredibly smoothly considering that it was only 17 days from the day the fires descended into the city until the day of the first check distribution on December 15th. The speed at which the team could validate recipients and cut checks was remarkable. Dotson observes that those who had been operating in other kinds of relief or social services “…kept shaking their head and saying, ‘How in the world did y’all do this in two weeks? This is one of the most amazing things I have ever seen’.”

In those first four days in mid-December, they vetted, processed, and distributed checks to approximately 900 families. There will eventually be between 900 and 950 families assisted by the My People Fund. The team established six distributions, one at the end of each month from December through May, all at the Care More Assistance Center. Working with Citizens National Bank, the team was able to cut checks on the spot.

When asked about what’s happening in the immediate future, Dotson jokes, “I’m going into disaster response consulting.” Truthfully, though, the Dollywood Foundation is simply moving forward with its mission: concentrating on growing the Imagination Library program, which passed the million-kid mark in November.

Dolly and her staff are going to keep doing what they do—making the lives of East Tennesseans better and giving us stories to tell one another when we’re talking about home.

The My People Fund has raised enough funds to fill Dolly’s commitment and are directing those who still wish to give to mountaintough.org.

Keith Norris is editor of Cityview.