The Legacy of the Passenger Pigeon 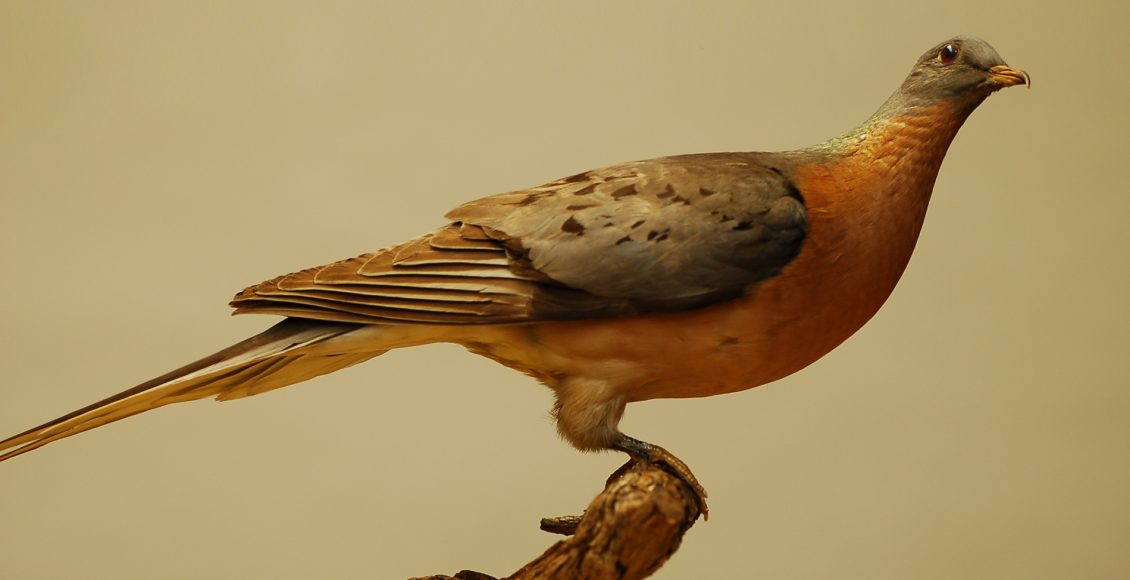 Once upon a time…there were more passenger pigeons in the world than any other bird species. Some experts estimated the total population at between three and five billion when Europeans discovered the Americas. In 1813, French-American naturalist John James Audubon described a mile-wide flock of migrating passenger pigeons as “traveling at speeds of sixty miles an hour and blocking the sun for three days as they passed overhead.” Native American author Simon Pokagon wrote, “Never have my astonishment, wonder, and admiration been so stirred as when I witnessed these birds drop from their course like meteors from heaven.” Their colors were equally impressive. The head and upper parts of the 16 ½-inch male pigeon were a bluish gray with black streaks on the scapulars and wing coverts; patches of pinkish iridescence at the sides of the throat changed in color to a metallic bronze, green, and purple at the back of the neck; the lower throat and breast were a soft rose, gradually shading downward to white; the irises were bright red, the bill black, and the feet and legs were a rust color.

The southeastern states, and notably the mountains of East Tennessee, served as winter homes for the species. The Pigeon River, which flows through Cocke County, and Sevier County’s Little Pigeon River, both tributaries of the French Broad, were named by the Cherokees for the passenger pigeons which roosted along their banks. Pigeon Forge, best known now as the home of Dollywood, adopted its name from the passenger pigeons gathering at the 1817 Isaac Love “forge,” which once stood next to where the Old Mill is today. Middle and West Tennessee also served as homes for the pigeons. W.R. Manlove of Nashville described a flight he saw in the last half of the 19th century: “The column [of passenger pigeons] was so wide, it reached . . . a distance of a mile, and so dense as to darken the sun, so that we had to light lamps in the house . . . The swishing of their wings . . . was like . . . a mighty rushing wind.”

Unlike the domesticated carrier pigeon, the passenger pigeon qualified as wild game, suitable as an important source of protein. After the Civil War, however, the extension of railroads and the telegraph system signaled trouble for the species. Professional sportsmen learned of their new nestings and followed the flocks throughout our continent. A shooting contest lasting only a few hours resulted in the deaths of over 30,000 of the pigeons. In Petoskey, Michigan, hunters killed 50,000 birds a day at a single nesting site for almost five months. The harvesting of the birds as a food source filled barrels which, in turn, were shipped throughout the country on a commercial basis. A dozen birds could be acquired for 50 cents.

Unfortunately, the pigeon also served as an irritant to farmers. Although the birds’ diet included beechnuts, chestnuts, acorns, and berries, the crops in the fields were not immune from assault by the migrating pigeons. A single shotgun blast from a protective farmer could kill handfuls of the birds. Nevertheless, by 1871, naturalists still estimated the population at over a billion. Twenty-five years later, however, the passenger pigeon had almost disappeared. In March of 1990 in Pike County, Ohio, a boy named Press Clay Southworth shot a female with a BB gun. Because an amateur taxidermist used buttons to serve as eyes, the mounted bird was naturally called “Buttons.” This was the last hunting victim of the purge. In 1914, a female named Martha, the last of her species, died at the Cincinnati Zoo. At the age of 29 years, she had not once in her lifetime laid a fertilized egg.

At the beginning of the 20th century, Congress passed legislation restricting the interstate commerce in wild game. It was too little too late to save the passenger pigeon. Their complete disappearance, however, and the near extinction of the bison, both inhabitants of Southern Appalachia, instigated a major conservation movement. Anthropologist George Grinnell and ornithologist Joel Allen were early leaders in the effort. The whooping crane, reduced to a population of 16 at one point, certain whale species, and of course, the bald eagle were among the species to receive legislative protection. 1966 federal legislation, the predecessor to the Endangered Species Act (ESA), identified 14 mammals, 6 reptiles and amphibians, 36 birds, and 22 fish as deserving of protection. The design of the ESA, signed into law by President Richard Nixon on December 28, 1973, has been to identify and protect critically imperiled species from extinction. More specifically, the law has prevented the destruction of the habitats of endangered and threatened wildlife.

Although conservationists and the United States Fish and Wildlife Service (FWS) and the National Marine Fisheries Service, the federal agencies which administer the ESA, continue to litigate in the courts over enforcement issues, species which have benefited by the legislation include the peregrine falcon, the red and gray wolves, the grizzly bear, and the sea otter. The whooping crane has increased to 436. The bald eagle, increasing from a low of 417 pairs to over 11,000 by 2007, has been removed altogether from the endangered list. Over the last thirty years, the introduction of the peregrine falcon into the Smokies has been successful, but not so with the red wolf. The wolves wandered outside of the Park boundaries for food, often at the expense of local farmers. An outbreak of parvovirus, a contagious disease affecting canines, put an end to the local experiment.

The story of the passenger pigeon may not, after all, be at an end. When extinction was inevitable, the Smithsonian Institute preserved a number of passenger pigeons. The Science Center at the Great Smoky Mountains National Park has a beautifully restored full mount. Artist Robert Tino painted an original years ago at the request of the Park’s Tremont Institute, an organization dedicated to environmental education. There are other collections. Some thirty years ago, a boy named Ben Jo Novak discovered a photograph of the passenger pigeon at the North Dakota State Fair. His glimpse of “the most beautiful bird I have ever seen,” served as an inspiration to study science. Novak, now a scientist with the organization Revive and Restore, is leading a “de-extinction” initiative called the “Great Passenger Pigeon Comeback.” By the use of DNA extracted from museum specimens, he intends to recreate the species. The primary goal of the ESA has been to prevent the extinction of important plant and animal life. Should the legislation be interpreted to encompass de-extinction, the FWS could be a full partner in the effort. If the plan achieves success, may the gracefully resplendent passenger pigeon live happily ever after!