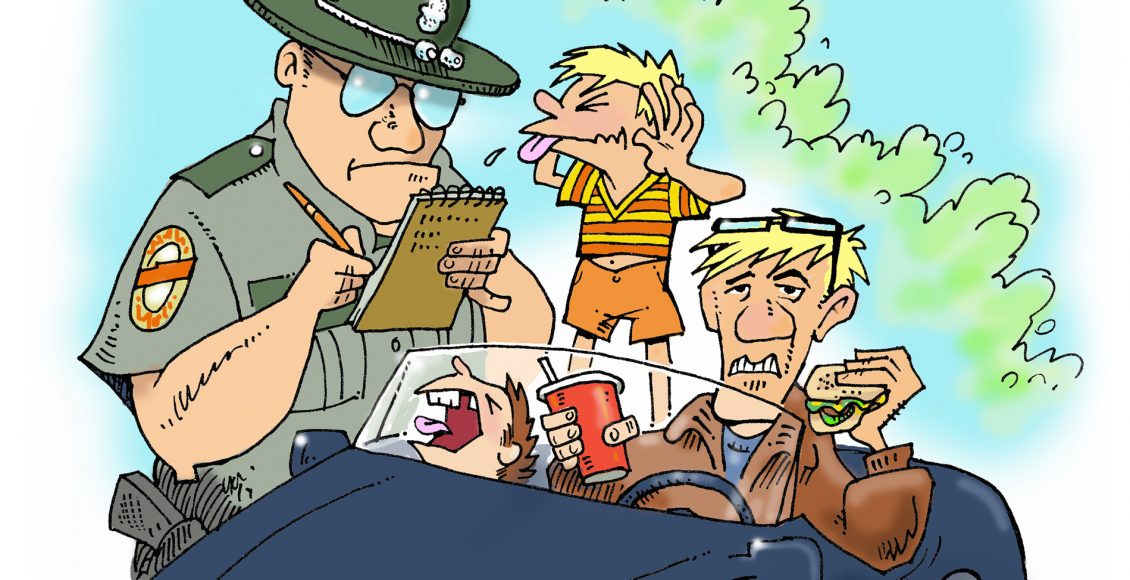 What’s the deal with the new ban against using cell phones while driving?  I understand distracted driving is an issue, but why single out cell phones? If we’re going to outlaw driving distractions, why not outlaw applying makeup or eating or screaming kids?

Before getting to the heart of your question, the Knoxonomist wishes to inform you that he has learned the hard way not to opine on makeup or the application thereof; on that issue he has no comment, no opinion, no position, no thoughts, nada – he is not only a blank slate, but a blank slate that can resist diamond-edged chisels. Foolishly, the Knoxonomist once channeled Hamlet and muttered “paint an inch thick” while impatiently waiting for Mrs. K to finish putting on her makeup before we left for a party. Sweet, demure Mrs. K is in truth as deadly as an adder fang’d, and she let it be known in icy terms and razor-sharp tones that she did not appreciate comments from the groundlings. The atmosphere in the car while driving to the party was decidedly chilly.

Now to your question. Let’s start with a simple, obvious fact, which requires only the cognition of a garden slug to grasp. Calling or texting while driving is insanely dangerous; it is the behavior of cretins, dolts, and those who don’t know how to use highway entrance ramps. According to The National Safety Council, 660,000 drivers use their cell phones while driving every day, and the Knoxonomist believes that he sees most of them every time he gets behind the wheel. Sadly, calling or texting while driving causes some 1.6 million crashes each year. Folks who study this issue report that this kind of distracted driving is more dangerous than driving while intoxicated.

So, in principle at least, the Knoxonomist, being a reasonable sort, is not opposed to the new law, though he notes that part of it is redundant: driving while texting was already illegal. Although by no means an out-and-out libertarian, the Knoxonomist does have sympathy for the notion that government is far too intrusive, that there are too many laws, and that many of these laws infringe on a reasonable understanding of liberty. (Why, for instance, is it illegal to play low-stakes hold ‘em poker with friends? Apparently, it is not gambling that is the issue since the state gladly rakes in vast sums with the lottery.) But cell phone use while driving is clearly dangerous not only to the driver but also to everyone else on the road. Your right to be stupid ends at precisely the point it risks the Knoxonomist’s life.

But, you ask, why not outlaw other types of driving distractions? Why not, indeed? Over the long years, the Knoxonomist has driven many carloads of screaming or fighting kids, he’s held greasy, artery-clogging barbecue sandwiches whilst driving, and he’s fumbled with audiobook CDs during long road trips. Should all that be illegal? Honestly, the Knoxonomist doesn’t know. The danger apparently is not with taking your hand off the wheel, it’s being distracted. According to the folks that study this stuff, it’s not holding the cell phone in your hand that is dangerous, it’s the talking or texting that is. Using hands-free devices, though still legal under Tennessee law, is not safer than using hand-held gadgets. Because of that, some fear that cell phone laws such as Tennessee’s can actually be counterproductive since they imply that hands-free devices are safer. Regardless, how do you outlaw all distractions? The end game, the Knoxonomist expects, is a future with only self-driving vehicles, and the flawed bags of flesh we call humans will be deemed too imperfect to trust behind the wheel.

There’s been a lot of media coverage of the 50th anniversary of the first Apollo landing on the moon. Has anyone from Knoxville gone into space?

The Knoxonomist wryly notes that that depends on what you mean by space. In his nearly three score years, the Knoxonomist has encountered many folks who were spaced out, often during a tailgate party or after viewing presidential election returns. And Mrs. K has on occasion noted with sincere uxorial concern that the Knoxonomist needs to keep his two feet on the ground. However, your mention of Apollo provides the contextual clues needed to infer that you are asking whether any space-faring astronauts were born in Knoxville.

After a bit of quick research, the Knoxonomist must sadly report no. However, astronaut William McMichael “Bill” Shepherd was born in Oak Ridge in 1949. He served as a specialist on three space shuttle missions, and in 2000 he and two Russian cosmonauts launched on a Soyuz to the International Space Station where Shepherd was commander of Expedition 1, the first crew on the space station. In 2003, he was awarded the Congressional Space Medal of Honor.

Oak Ridge is part of the Knoxville Metropolitan Area, so our city can claim some bragging rights. Alas, those bragging rights are diminished by the fact that Shepherd, though born in Oak Ridge, considers Babylon, NY, his home town.

However, the University of Tennessee Space Institute—an extension of the Knoxville UT campus located in Tullahoma—counts among its alumni 9 astronauts, including Scott Kelley (M.S. in Aviation Systems, 1996). Kelley commanded the International Space Station on three missions and was the first American to spend a year in space. In addition, Margaret Rhea Seddon (M.D. 1973), an alumnus of the UT College of Medicine, served three times on the International Space Station, twice as a mission specialist and once as a payload commander. The Knoxonomist tips his hat to all these UT astronauts and to the UT Space Institute which does all sorts of spacey stuff, including developing microchips used on the Mars Curiosity Rover.