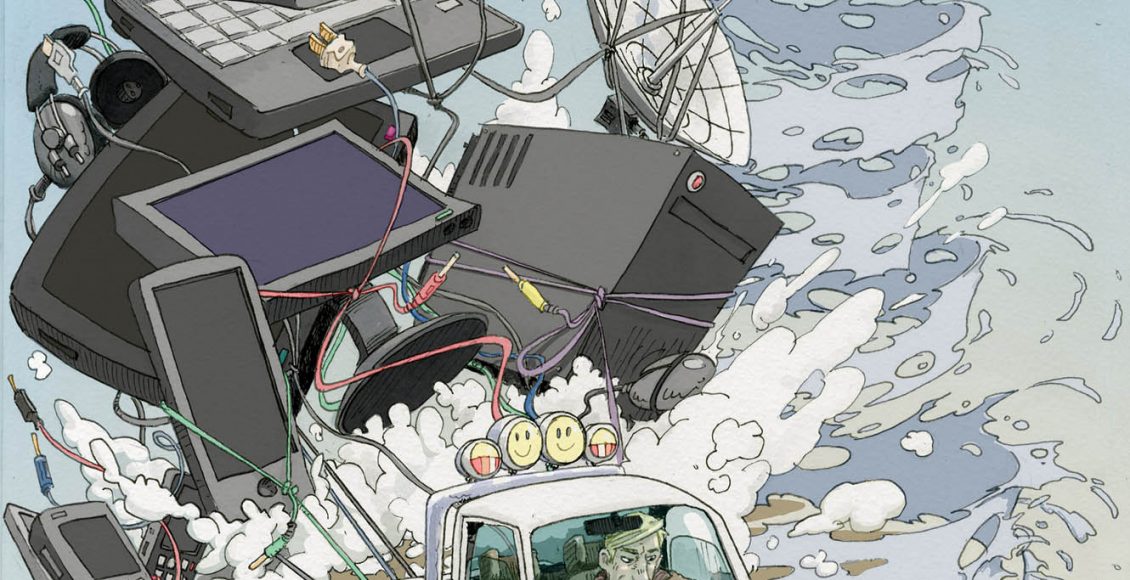 “Seems like no matter where I am or what I am doing, I am never really alone. Is it true that my conversations are being monitored? Every comment I make seems to reappear as an ad on my personal device. Is there any way to avoid this pestilent-like surveillance?”

The Knoxonomist knows exactly how you feel. Recently while on a regular jaunt to the local watering hole, some nitwit—evidently trying to watch a movie while driving—damn near ran a truck full of chickens off the road and feathered a local panhandler. The Knoxonomist expressed displeasure at this featherbrain’s obvious disregard for the safety of his fellow man with some choice profanities. Suddenly there was an unexpected and unknown voice in the cab: “Is there something I can help with?” Somewhat stunned, the Knoxonomist replied, “Who the blue blazes are you, and how did you get in here?” This prompted another painfully polite response: “Is there something I can find for you?” The inner Knoxonomist surfaced as a superlative smartass, “Sure. I would like to find eternal bliss.”

After a moment of pause, the voice replied, “I have located Eternal Bliss in Texas. Would you like directions?” The Knoxonomist wondered if that might be because everything is bigger in Texas. But the Knoxonomist had always known that true bliss was right here in the good ole Volunteer State. After all, this is the home of the finest moonshine ever cooked up. Bliss can also be found while pursuing certain species of fish or the occasional horned mammal.  However, evidently, to find true eternal bliss—according to the Knoxonomist’s intruder—one must go to Texas. To that the Knoxonomist says, “Hooey!”

The Knoxonomist knows this is not limited to himself. Why his own florist—yes, occasionally there is a softer side to the grumpy ole goat—regaled a perfectly horrifying tale of Alexa listening to her bedroom conversation with her husband where she asked if he ordered her a witch’s hat for Halloween. Before he could think of an aptly smarmy reply, Alexa chimed in: “It is in your shopping cart on Amazon.” Horrified at this information, the Knoxonomist immediately removed the Alexa Dots from all areas where marital congress occurs. No telling what Mrs. K might order if suggestions were made based on listening to the most intimate moments. The Knoxonomist wondered if any of the comments made in such a situation were being stored for future use. Clearly, he should not be held accountable to things agreed to after several shots of whiskey. In fact, all such comments should expire with the sobriety of the new dawn.

The Knoxonomist is perturbed by these unwanted intrusions. What’s next, video monitoring? With all of the deep fake software out there, there is no telling what you may find yourself starring in. The Knoxonomist isn’t really the paranoid prepper type, but enough is enough. So it’s time for some good ole-fashioned man time.

The Knoxonomist could just head out to the wilderness and leave electronics home, but then there could be trouble with the missus later. So here is the plan. Make sure your device has some sort of coverage that includes theft, loss, and liquid intrusion. Grab your favorite fishing gear and head to the lake or river. Upon arrival, toss that puppy right into the watery abyss. The insurance company will replace it in a few days, and for a time you will be free from those prying ears. And don’t be worried about the minor mistruth you will have to tell; no one ever went to hell for lying to an insurance adjuster.

The Knoxonomist further says that if you get home and the first ads you see on your device are ones about separation anxiety and the benefits of having an implanted tracking device, well, perhaps it is indeed time to consider off-the-grid life. Be sure to write.