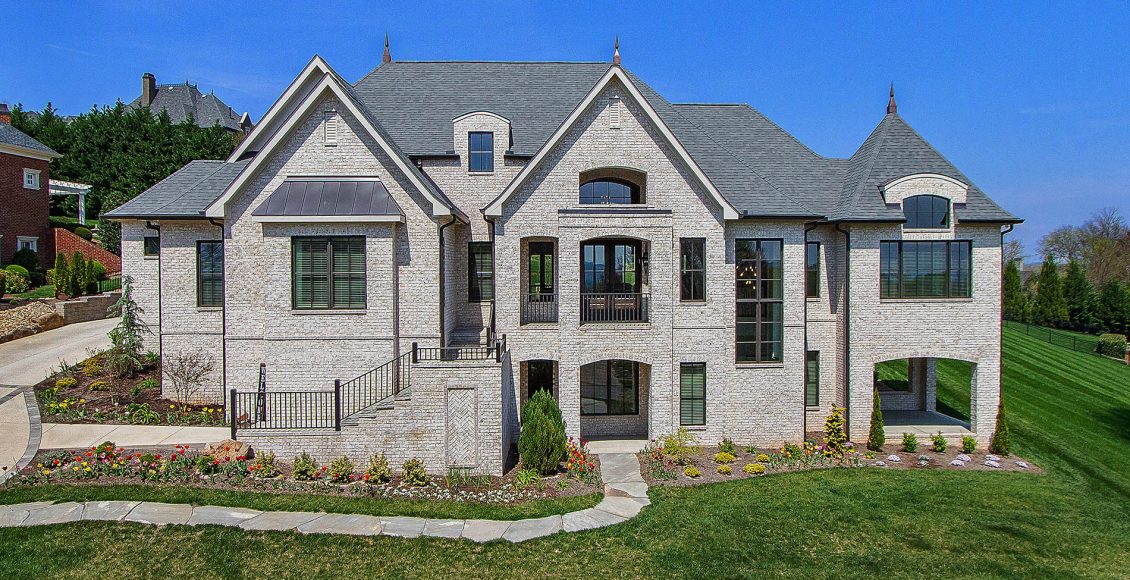 A distinct barrel-vaulted ceiling with herringbone brickwork brought a couple’s heart-of-the-home kitchen together. But it’s the inspired Brazilian quartzite island that is the centerpiece in the new house.

“It makes our kitchen a dream for cooks and entertaining, and it’s the most important piece in our new house and the very first piece we bought,” says the homeowner. So, they designed the entire kitchen around “this piece of art.”

The stunning steel blue 10-foot-long island with hints of pearl and gray is just one of many standouts in this 5,225-square-foot home at Bridgemore Planned Community in Farragut.

Originally from the Northeast, the homeowners—who preferred not to share their names—have called Knoxville home for 15 years and moved into their new home in May 2020. “We love Knoxville more than any other place we’ve lived. This is our home to stay.”

It’s the couple’s second custom-built home in Bridgemore. Their first home, which they built in 2006, was this community’s very first home. And much like that first home, they made every building and design decision together—down to the hinges on the doors.

One of the highest points in West Knox County and in Farragut, Bridgemore’s 340-acre location offers extraordinary views of the mountains and is minutes from the Tennessee River and Fort Loudoun Lake.

The homeowners decided to downsize after their children were grown. Although, now that their children have spouses, families, and pets, they were careful not to go small: “We enjoy the main level and when family is here, we have a whole other living area on the lower level with a great room and stone fireplace, kitchen, two bedrooms, two baths, and a media/bonus room.”

This is a bright, inviting home with panoramic views through soaring windows that flood the rooms with natural light.

Davis founded Stephen Davis Home Designs in 1990. He and his team work closely with homeowners to come up with architectural ideas that don’t fit into one style box.

An unusual front elevation with the home’s main entrance came together in a fun way. Tall windows showcase a wood floating staircase with a black iron railing. Davis and the homeowners customized the staircase to fit their desire for more natural light, making the four-bedroom, four-and-a-half bath home feel even more voluminous.

An office for the husband stands out for its windows that offer breathtaking views of the Smoky Mountains. “It’s really just so gorgeous in there. I don’t know how he gets anything done,” Davis says.

Large windows and high ceilings surround every room; the couple likes to call their new home “our glass house.”

Davis and builder Chip Seigler, owner of Seigler Building and Development, together designed and built the homeowners’ first house at Bridgemore. They say this new home mixes many elements of granite, timbers, and flooring—from the great room with its four curved eastern white pine beams and stone fireplace to the 13-foot-ceiling master shower with surrounding high windows.

Watching the beams being hoisted in place by lifts onto the 22-foot-high ceiling was “incredible,” say the homeowners. Appalachian Log and Timber Homes supplied the beams.

“The master shower is pretty amazing, and it looks like rain is coming right out of the ceiling,” says Seigler. Five windows on the perimeter of the shower bring more light into the bathroom, and tile walls 13 feet high add another architectural detail to this dramatic space.

These design statements throughout the home are intentional art. Well thought out from the beginning of their dream, the homeowners planned their home for every time of day and for every season. “We’ve thought about what our home feels like at night as much as how it feels in the day. With the right lighting, a house can glow. We also wanted our landscaping to pop with color in the spring and to soften up the brick with evergreens so that it looks great in the winter.”

Part of the beauty of the property is the show of 400 tulips that the wife planted, one of her favorite flowers to welcome spring.

His office overlooks the mountains. She sees two of their four patios from the great room. They both see East Tennessee’s beauty from every corner: “And it is all on purpose, just what we wanted. Our designer and builder helped give us this.”

These homeowners enjoy a flair for style and design, and Seigler says part of what he does is help bring to life what people want in a home. “These folks knew what they wanted. Their home is built around the pine beams in the gathering room, and the rooms flowed out of that,” he says. “We do so much custom work, and homeowners are often dreaming about that special house for a while. They have a starting point, and in this home the great room was it for this couple.”

And then, of course, there is that floating staircase. “We were able, too, to line the stairwell with shiplap board. It’s all pretty grand,” says Seigler.

It’s just what this couple wanted.

Other additional touches came from these homeowners’ dream. Seigler’s construction team took brick and laid the herringbone design in the kitchen’s barrel-vaulted ceiling. The resulting color scheme of ivory and cream on the ceiling brick and cabinets blended perfectly with that special Brazilian quartzite island. Meridian Brick supplied the materials for the kitchen’s vaulted ceiling as well as the home’s brick exterior.

“Not everyone is qualified to install herringbone brick on a ceiling,” says Seigler “It’s a half dome. It’s also not often we build a home where the lower level is accessible from the front entrance of the home.”

The rest of the house is a timeless color palette of light gray with hues of blue and a medium brown hickory floor. So much about the home’s artistic feel has made Seigler’s relationship with the homeowners and design team memorable. “It means a lot to get to come back and build a second house like this one.”

Davis agrees and credits much of his ease in collaborating with builders and architects to his own early work experience as a roofer and carpenter. He has a deeper understanding of the enormous amount of detail it takes for a team to create something original. “I don’t stay within one style or design, and I try to marry function and originality. If you do your due diligence, you accomplish both,” he says.

The home’s unique lot that slopes in the front presented an intriguing challenge for the design and building team to create a brick terraced front entrance. “The homeowners also wanted a vaulted space that grows in height from the front door through the great room and as you go to the back of the house,” says Davis. “It all works. The inside of this home flows and functions with the creativity.”

“My favorite part of this work is the customer collaboration with the design team to take a solid project and make it better. I think we did this,” says Seigler.

An Abundance of Caution

While much of the United States shut down in March 2020 due to the pandemic, Seigler’s construction team was just starting its detail work on the couple’s home.

Seigler approached his subcontractors and the homeowners to stress that they would finish the home with an abundance of caution. “We pushed very hard for a safe working environment, and we finished the home in June.”

The homeowners say both Davis and Seigler helped them move into their new home in the middle of the pandemic, something they never could have imagined. “The building slowed a little because of the pandemic, and we were actually lucky in the timing,” she said. “Smaller groups, always masked, worked in the home. We have a special appreciation for this and for our contractors staying healthy.”

This elegant, serene home works because of a couple’s dream that combines creative flow and function. “Steven carved out the house to fit the property, and Chip built it wonderfully,” says the couple. “We’ve used every inch of space for our house.”

“There’s simply no other house like it in Bridgemore.”