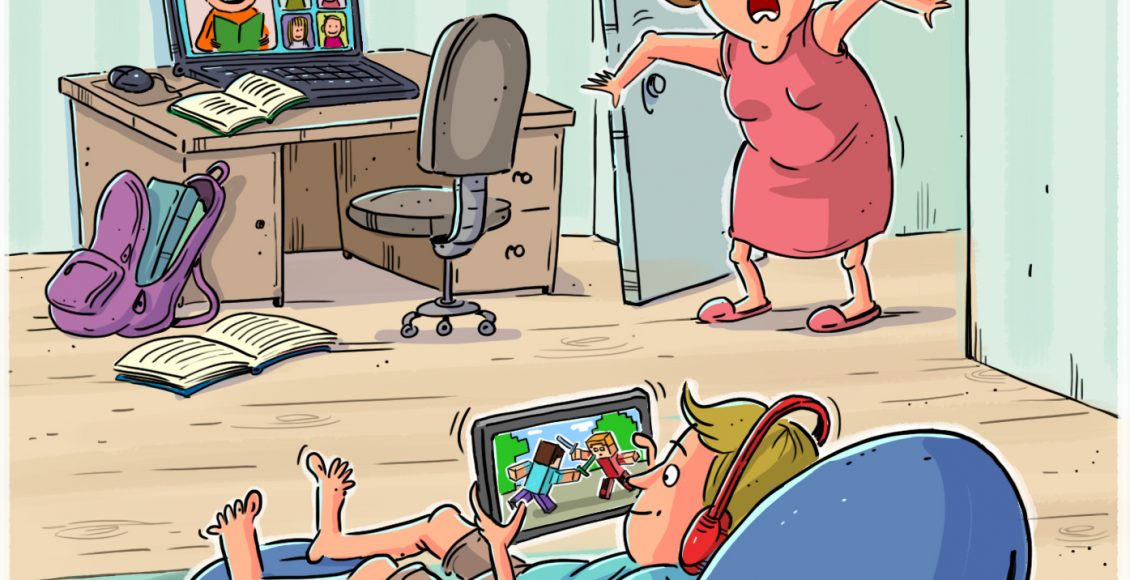 I just caught my 14-year-old son playing Minecraft while an animated GIF of himself attended his remote class! He’s losing interest, not turning in his assignments, and quite honestly, I’ve tried everything. What’s next, boarding school?

The Knoxonomist knows that every generation thinks it is harder for them than their parents. Why, the Knoxonomist’s own mother tells of walking five miles to school, through the snow, every day, uphill both ways. He knows this because he has heard the story one too many times. The Knoxonomist loves to regale his own children with tales of childhood antics and struggles, often embellishing to make his point. It is not only the right of each parent to do so, but a responsibility to let the little ones know just how easy they have it.

The Knoxonomist vividly recalls the magical transformation that typically occurs around early teen-hood as the ego blooms. The Knoxonomist suspects your youngin’ mysteriously came up with this scheme after binge watching Ferris Bueller’s Day Off and the entire series of Home Alone, fueling his testosterone-clouded adolescent mind with the idea that he is smarter than both you and his teachers. While that may be true, there is more at play here than meets the eye; there is an unseen antagonist lurking in the back of your home drama.

The Knoxonomist suspects your own parents have aided your son in this ruse, paying you back for the hormone-drenched agony you caused them in your adolescence. Yes, they have waited patiently for decades to take their revenge. “Bless your heart, you were a perfect child!” may come from their lips, but it is only a thinly-veiled distraction as they work on the modern day drama about to unfold in your home. They are no doubt snickering quietly during your frantic evening calls about your son’s apparent free-for-all. The time has come to take back control.

Take away your son’s phone, and then frequently and unexpectedly drop him off at your parents’ home at times when you know they have other plans. Don’t forget to say, “Bless your hearts, you are perfect grandparents.” Without his precious device to occupy him, your adolescent will begin to drive them crazy. The Knoxonomist recommends throwing in other fun comments when they complain like, “Nut doesn’t fall far from the tree,” or, “So thankful you’re still young enough to help raise him.” They will quickly recognize your superiority and stop fueling the little brat to deceive his teachers.

But alas if you don’t win this round, take heart. Your son will grow up to be a fine man, marry, and give you grandchildren. And that, my dear Karen, is where you may seek your own revenge, as you teach those precious little hellions the tricks of the trade then send them home to your son to unwittingly render your revenge for the hell he is putting you through. Just be careful not to fall prey to the same scheme you are putting your own parents through. Perhaps you can come up with your own animation to fool him into thinking you’re not home.