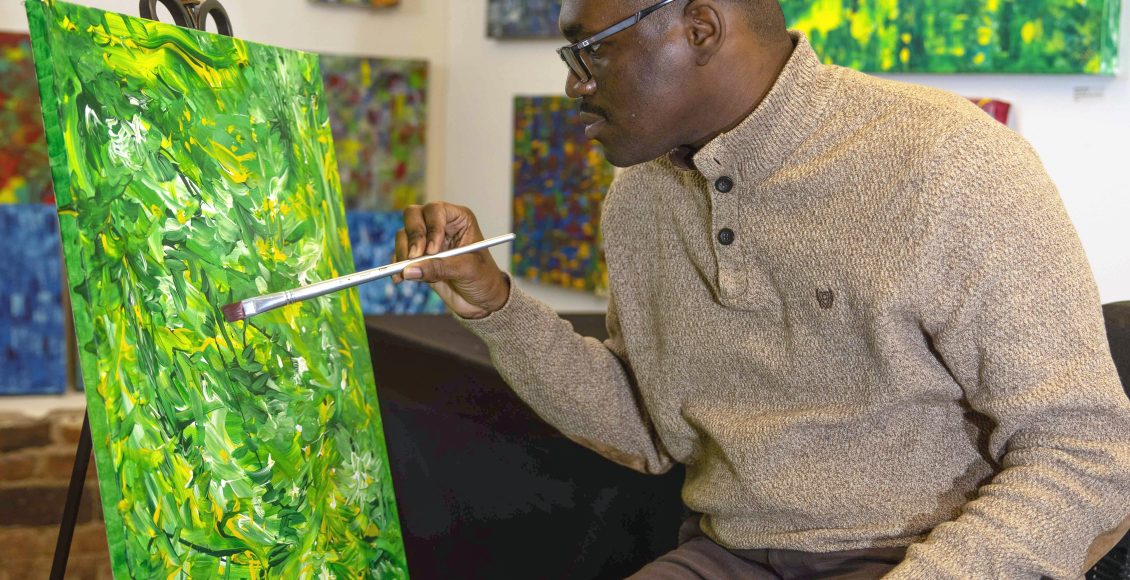 Derrick Freeman’s influence as an artist radiates from the studio he maintains on the lower level of the Emporium Center downtown. Freeman, 30, has autism and has been expressing himself from a very young age through his vivid abstract paintings. From his studio and on his website, derrickfreemansart.com, Freeman sells original art, prints, notecards, bookmarks and, most recently, scarves, created through a partnership with Geneva Galleries Inc. His work is also available at the gift shop in the Knoxville Museum of Art.

From the fall of 2019 until this past September, 16 pieces of his work were on exhibit at the Sensory Arts Pavilion within the Els Center for Excellence campus in Jupiter, Florida. Founded by pro golfer Ernie Els, the foundation offers resources and programs that are leading examples of what can be available to people with autism spectrum disorder.

Freeman’s art also inspired his mom, Angela Freeman-Hunter, to create a nonprofit called Our Place Art Organization. Freeman-Hunter, who works in the special education department at Powell High School, created Our Place to enrich the lives of people with disabilities through the arts. Before COVID-19, it offered camps and workshops to explore creative disciplines, including art, music, dance and gardening. Recently, some of their programming has been presented online.

The youngest of three children, Freeman was an active, talkative baby until he was 2, when he was diagnosed with autism. Within a year, art became his preferred form of communication. As a teen and adult, his work has been exhibited around Knoxville and the state. He’s had a solo exhibit at the McMinn County Living Heritage Museum in 2010 and at Lipscomb University in 2012; in 2015 his work was included in the Community Partner Art Exhibition at the Frist Center for the Visual Arts in Nashville.

Freeman says his paintings and the bright colors he favors make him happy. Though the bulk of his work is abstract, he has also created many of his own versions of the Mona Lisa, which he finds inspiring. When he’s not painting, he works at the Arby’s restaurant on Papermill and volunteers at The Muse.