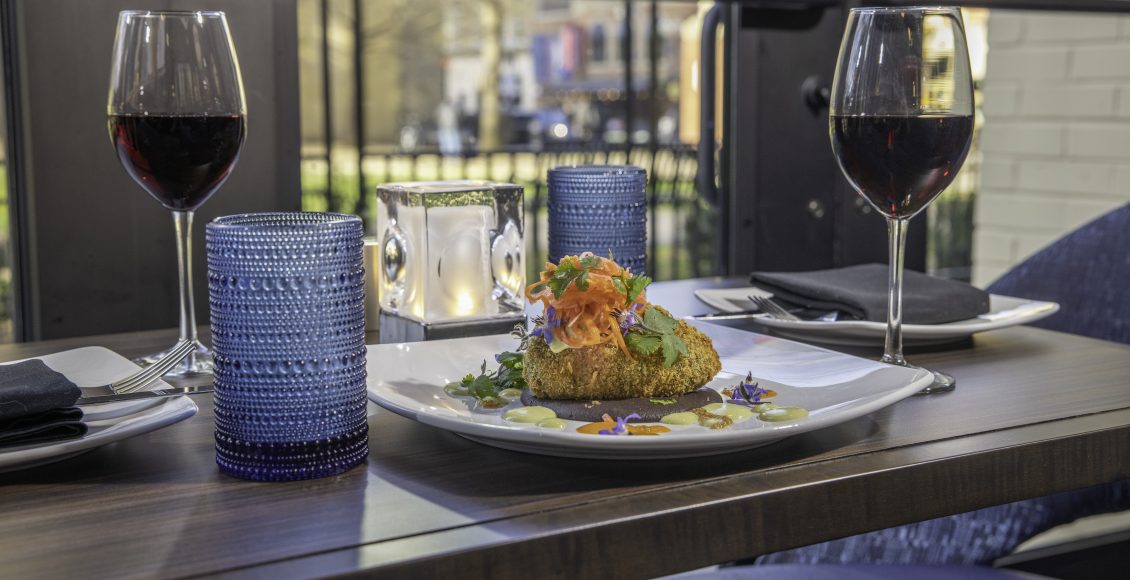 Stepping into Vida, Knoxville’s new Pan-Latin restaurant on Gay Street, it’s hard not be impressed. Owners Jim and Lori Klonaris, who have been working the restaurant lane for the last 25 years, have transformed the bottom level of the Holston Building into a high-end dining experience. All of the Klonaris’ undertakings have been well-received, from Kalamata Kitchen in the early years to their more recent ventures in Café 4 and Kefi, and it was clear upon visiting that Vida would not be the exception.

Crystal glasses and soft-folded napkins rest on tables waiting for patrons to arrive. Intricate light fixtures draw the eyes up to the towering ceilings. Artwork by well-known names drape the walls, as gold railings and accents shimmer along a marble bar. Everyone here is dressed in cocktail attire. A look out the window you’ll find green space instead of buildings, a sight not found when dining elsewhere downtown. The space is chic and sophisticated.

I imagined the food would be up to the same standard. Executive Chef Jon Gatlin, a Knoxvillian who holds a culinary degree from Le Cordon Bleu Atlanta and formerly of the Oliver Royale on Market Square, has created a menu reminiscent of big-city dining at its finest.

Our first course was a Chile Relleno consisting of a perfectly blistered and breaded poblano over a creamy and rich black bean puree. The pickled slaw served on top of the pepper worked flawlessly with this dish, adding a cool flavor. The cheeses within were delicious and melted perfectly. All this along with the cilantro lime crema dotted on the plate worked well together creating a delectably fresh experience.

The beef short rib, cooked by being submerged in duck fat at 225 degrees for eight hours, was a scrumptious plate. The tender meat was served with a horseradish crema, arugula (which was hard to find on the plate), manchego cheese, demi-glace, and a parmesan polenta. The entire dish was flavorful and executed well.

Empanadas with house-made pastry and filled with a beef confit came next. Dipped in the romesco sauce, these little gems were absolutely delicious, mild in flavor, but with just the right amount of seasoning.

We were brought ceviche next, consisting of soy, fish sauce, and sesame oil marinated diced ahi tuna, kiwi, avocado, and a marinated seaweed salad. This dish was well thought out and mild in flavor. I would have enjoyed a crispy pita or toast point with it to offer some varying textures.

Our evening ended with a chocolate bowl filled with fresh berries and ice cream. The server lit a gravy boat filled with homemade caramel and rum on fire in front of us and slowly poured it over the fruit. Still on fire, the chocolate bowl began to melt, creating a sweet and delightful slurry. The flavors were outstanding; the display spectacular.

Chef Jon’s prowess in blending flavors is exceptional, as is his presentation. Fresh micro-greens and edible flowers add a nice touch to the overall plating and arrangement of his dishes, creating art that patrons take pause to admire before diving in to savor the flavor.

Vida lived up to the environment the owners have created. The staff is professional, poised and polite, and the dishes featuring fresh-made, clearly chef-driven foods rank among the best. Vida is a must visit for anyone looking for an artful and tasteful high-end dining experience, and if time permits, don’t leave without getting a drink at the Vault downstairs, a complimentary experience not to be missed.