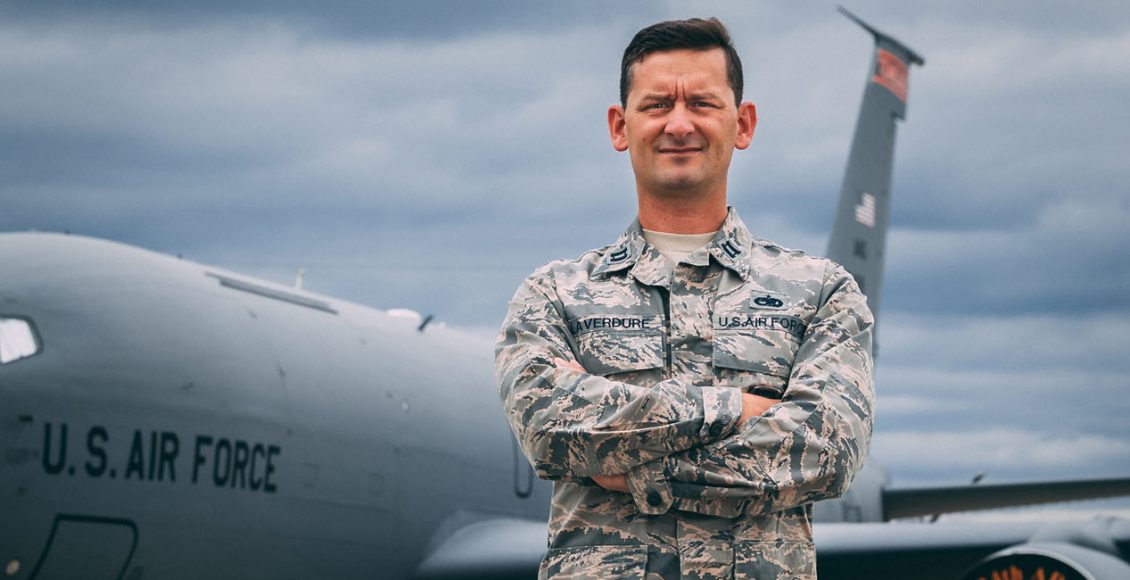 Michael Laverdure’s journey through life really accelerated with his first car, a 1975 Dodge Dart. But he found the direction he needed from his service in the U.S. Air Force.

Laverdure was 17 years old and living in Florida, where his father, Richard, was stationed at MacDill Air Force Base in Tampa. His recently purchased auto needed some brake work, but the mechanic who looked it over cautioned him about the guy in the front office. “He’s going to try to sell you parts you don’t need,” he said.

Rather than fork over money needlessly, Laverdure spent $5 an hour to rent a bay at MacDill’s hobby shop. He checked out a manual at the library and, with some guidance from a presiding mechanic, did the brake work himself.

During the ensuing 23 years, Laverdure graduated high school and went to a technical school outside of Tampa. He began working in auto shops and continued after moving to Knoxville. He then got a degree from the University of Tennessee and followed in his father’s slipstream, serving eight years of active duty in the Air Force as an aircraft maintenance officer.

Laverdure’s tour of duty included two years (2014-15) at Incirlik Air Force Base in Adana, Turkey, where he was 60 miles from the Syrian border and the hornets’ nest of a civil war there that helped fuel the rise of the terrorist group ISIS.

At the outset, Laverdure’s wife and children were there with him. While precautions were necessary, the daily routine revolved around shared vigilance more than anything else.

“The Turkish people are very friendly and they don’t like ISIS either,” he said. “We all watched out for each other.”

The situation eventually intensified, and the base was put on lockdown. Laverdure’s family left early, ostensibly for a family wedding, and didn’t return. Two weeks after he left, a coup d’etat was attempted in Turkey.

From there, Laverdure went to Luke (Ariz.) Air Force Base. Conditions were more tranquil, and the experience was useful in a different manner. He got a crash course in problem-solving while maintaining F-16 and F-35 aircraft for training purposes.

“I had the oldest fighters in the fleet … with the lowest priority for parts and money and trying to figure out how to keep these planes flying on a very aggressive flying schedule,” he said.

Laverdure essentially was working with an arm and a leg tied behind his back. He didn’t have a problem with motivation, however.

“I loved the challenge,” he said.

What he was doing then correlates to what he’s doing now growing a business. In August of 2018, he bought an AAMCO transmission and total car care shop that’s tucked between Schaad Road and Clinton Highway. He attached “Knuckle Busters” to the name to attract attention and mounted an air dancer on the roof to catch the eye of passing motorists.

But mostly he’s recalling his previous experiences and setting the course of his business on his belief that “there’s plenty of honest money out there to be made.”

He intends to be a guy in the office that you can trust.

“My vision is I want to be the best,” he said. “Instead of differentiating myself on price, I want to do it on quality work and customer service that goes back to the Air Force core values.”

Along with repairing vehicles, Laverdure also had to fix his shop when he took ownership. Business was down as well, which amplified the anxiety created by the initial capital investment. Along with his own money, friends of his wife had invested. The total outlay was more than the $300,000 estimate given regarding start-up costs. The sum of the situation amounted to a lot of sleepless nights.

His military experience helped him put everything in an unusually proper perspective.

“At least no one is shooting at me,” he said. “I don’t have to worry about missiles coming at me. Might lose some money but nobody is going to die.”

Laverdure was born in Massachusetts, where his father’s French-Canadian ancestors settled. He’s lived all over the United States and abroad because of his military background.

He came to Knoxville in 2001 when his father moved to the city after retiring. He met his wife, Rachel, here and laughingly recalled how the relationship survived one of their first dates, when he locked his keys in the car after going to Litton’s for dinner.

For him, going to lunch was a different experience entirely, illuminating rather than embarrassing. When attending classes at UT, he sometimes wore his cadet uniform. He remembered more than once having his midday meal bought for him without his knowledge.

“There’s a huge support system here for veterans,” he said. “It’s unique because you don’t have a big base.”

Owen Ragland, a retired Air Force Colonel, was the commander of the university’s ROTC program when Laverdure was a student. He’s also past president of the East Tennessee Military Affairs Council, a non-profit organization founded in 1990 to encourage and support military activities in the area. The ETMAC, which works in cooperation with the Knoxville Chamber, is a valuable resource for someone like Laverdure.

“He was a hard worker and he had a goal, you could just tell,” Ragland said. “He’s exactly what I think embodies a veteran coming back into the community.”

While Laverdure offers discounts to veterans, everyone gets the benefit of his service core values, which emphasize integrity, service before self and excellence in everything. He devotes Monday mornings to calling every customer from the previous week to make sure they’re satisfied.

“I’ve saved a few customers that way,” he said.

The shop had reached the point where a week’s worth of business equated to the first month’s volume. Then came the coronavirus pandemic and its gut punch. Although business has bounced back, he conceded, “In business, one bad week can take you two months to recover. We had a few bad weeks.”

The reaction that Laverdure values most is in the reviews on the shop’s website. Customer Christine Fredette submitted a comment four months ago.

“They definitely build business relationships with their customer,” she wrote. “I’ve had my own business for +25 years and I can count on my hands how many different businesses I have been to throughout the years that have this type of quality.”

Laverdure and his crew think enough of Fredette to give her a handwritten thank you note every time she’s had work done there.

“As corny as some people might think that is, it’s a big deal,” she said.

Such feedback is gratifying. It’s bound to help Laverdure sleep well at night.