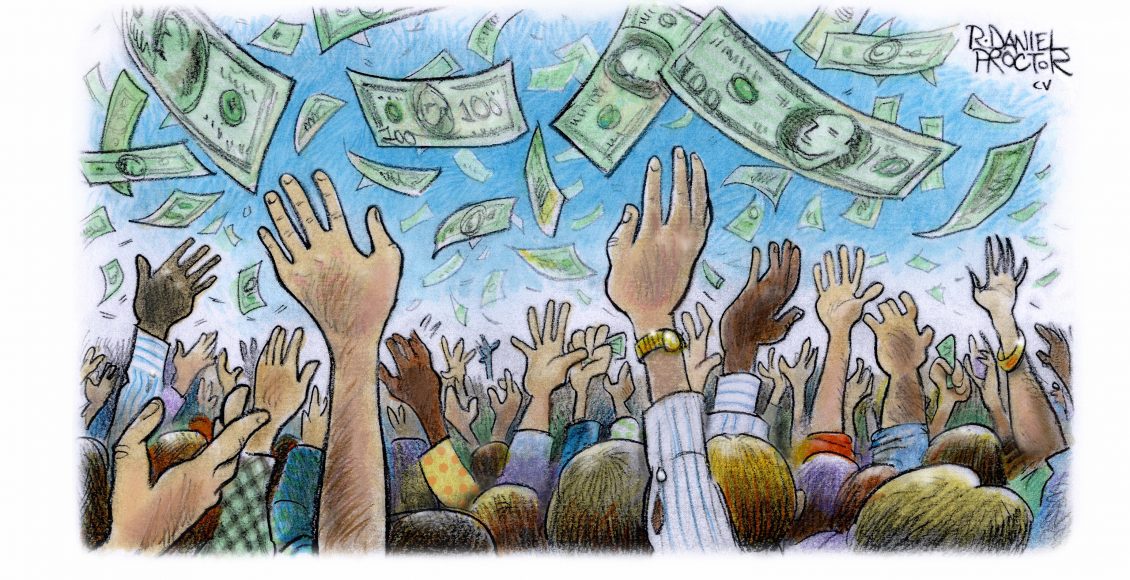 Stimulus plans have strings attached to all taxpayers

Sen. Dirksen was so 20th century: The federal government’s coronavirus (COVID-19) pandemic response can be measured not in billions, but trillions. COVID-19 relief bills infused cosmically-sized amounts of borrowed money into the national economy as lifelines for individuals and businesses in the wake of government-imposed business shutdowns.

The “free” money saved many—but not nearly all—businesses from shuttering and thrusting employees into unemployment. But nothing is free. Governmental largesse comes at a cost to taxpayers, a cost which can be inflated, manipulated, or massaged during a crisis.  As Democratic U.S. Rep. James Clyburn reportedly told a House Democrats’ conference call last March, before the first trillion-dollar COVID-19 relief bill passed Congress: “This is a tremendous opportunity to restructure things to fit our vision.”

The multiple versions of the Health and Economic Recovery Omnibus Emergency Solutions (HEROES) Act, introduced by U.S. House Democrats as COVID-19 response legislation, are illustrative of governmental leaders responding in the manner described by the now-immortal words of President Barack Obama’s White House chief of staff Rahm Emanuel: “You never want a serious crisis to go to waste. And what I mean by that is an opportunity to do things that you think you could not do before.”

National Public Radio reported that by mid-May, the government had pumped some $3 trillion into the economy. Then came House Democrats’ proposal for another $3 trillion (later scaled down to $2.2 trillion) HEROES Act, which demonstrates that the word “coronavirus,” when festooned throughout a spending bill, covers a multitude of fiscal sins. Tennessee 3rd District U.S. Rep. Chuck Fleischmann, a member of the powerful House Appropriations Committee, described the HEROES Act as a “panoply of ultra-left-wing initiatives which they knew would be non-starters in the Senate and (the Trump) White House.”

Said Fleischmann of Democrats’ objectives, “That’s the practical effect, bailing out cities and states. There’s unlimited largesse in aid to states, largely northeastern and midwestern states, that are upside-down because of their inept handling of their pension funds and high-tax structures. It’s not fair for Tennesseans, living in a fiscally sound state.”

To Fleischmann’s point, according to an analysis by USA Today, Tennessee’s public employee pension shortfall is $1.7 billion, the country’s fifth-smallest pension liability. Conversely, California has a nearly $191 billion pension deficit, the nation’s largest. Illinois, one of the first states with its hand out after the pandemic hit, is upside-down $137 billion.

One could wonder if states in the worst financial shape have a vested interest in conducting coronavirus-related economic clampdowns. More unemployed workers and shuttered-by-government-order businesses means devastated economies, and coronavirus gets the blame. This puts pressure on the federal government to shovel money in those states’ directions.

There are those who say tax cuts are the problem; however, the government could confiscate—not tax—the wealth of every American millionaire and billionaire and it would amount to dropping a pebble into the red-ink ocean.

The House’s HEROES Acts contained temporary aid to classes of people illegally in the United States; money for science projects; suspension of federal student loan payments through September 2021; and 1,800 pages of other definitions, descriptions, and dollar amounts.

“I think the vast majority of Americans would desire and expect a reasonable stimulus bill in terms of size…On the other hand, we have to be cognizant of fact that every dollar we spend is a dollar further indebted…there’s going to be a day of reckoning,” Fleischmann said.

When that day comes, someone will try to take advantage of the crisis, because that’s how it works, particularly when you’re talking real money.