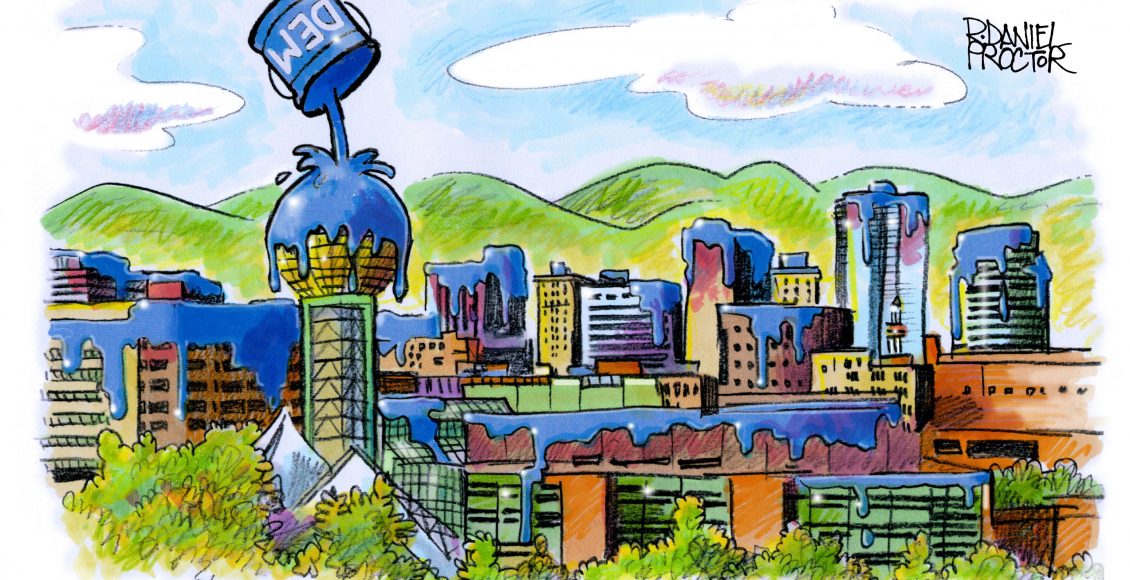 Will the blue wash over Knoxville’s traditional red political landscape.

On a WATE-TV show in 2003, after Bill Haslam was elected Knoxville mayor, I concluded that he might be the “last overtly Republican mayor of Knoxville.” That could still be the case, unless the new mayor and city council stall or reverse the city’s growing blue hue.
From 1972 to 2007, Knoxville elected four Republican mayors: Kyle Testerman (twice), Victor Ashe, and Bill Haslam. Randy Tyree was the lone Democrat between Testerman’s two terms. With Madeline Rogero’s 2011 election victory, and now Indya Kincannon’s accession to the mayor’s office, city voters have elected two, rock-ribbed, unapologetic, liberal Democrats.
The city council has been shifting as well, with little resemblance, physically or politically, to past city legislative bodies. Seven women are included in the nine-member council. As different as that may be, it’s not the biggest potential impact. The mayoral administration’s and council’s actions over the next four years determine whether the blue wave continues to wash over Knoxville. It could also show tinges of the color purple, or even (gasp!) red.

The Democratic Party’s movement has Tennessee Democrats in control of a handful of urban areas, Knoxville among them. Tennessee Democrats resemble fans of a losing football team, hoping each election cycle will be better than the last. Two headlines from the 2018 mid-presidential term elections reflect hopes, and hopes dashed:

Politically, Tennessee has gone Republican red, while Knoxville has gone Democratic blue. Many reasons contribute to this, such as demographics, the urban-rural divide, a desire to live near like-minded people, and a broad decline in local voter election interest.

Turnout grew slightly in the last two open-seat mayoral elections. In 2011, a paltry 21,000 voters were in attendance. In 2019, a slightly less paltry head count of 25,000 were in attendance. Still, low-voter interest benefits organized political efforts. Small turnout helps a good organization offset the advantages that money can bring to a campaign.

In Knoxville, hitting the organizational heavy bag to build its political punch is the “progressive” (really liberal) City Council Movement.
“The City Council Movement’s mission is ‘to strengthen the people’s political power by holding elected officials accountable via organizing, education and participatory democracy.’ The candidates speak of doing more for Knoxville’s impoverished and homeless and some are active in causes to help African Americans, like Black Lives Matter,” wrote News Sentinel columnist Georgiana Vines in an Oct. 9, 2019 pre-election piece.
Newly-elected council member Amelia Parker is a founder of the City Council Movement. Parker was endorsed by the Democratic Socialists of America, which stated in a news release following her victory: “In City Councils like Boulder, CO and Knoxville, TN, where the DSA already has one member in office, our influence is only growing, electing Junie Joseph and Amelia Parker to Council seats, respectively.”

On the City Council Movement’s Facebook page there are various photos of smiling people with raised clenched fists, promoting various “progressive” causes. The causes include Climate Strike, updates on city meetings and decisions, and an interesting Nov. 13, 2019 post about a “Post-Homelessness Summit Community Gathering” to discuss a “Homeless Bill of Rights.”

The Homeless Bill of Rights cites what homeless people should have a right to do in public spaces. Among them: “performing necessary body functions, occupying shelter from the elements, making use of the political left is successfully changing the face of Knoxville politics. However, to the degree the City Council Movement, Democratic Socialists, and whoever is in ideological agreement with them, try to transform Knoxville into a red-state version of San Francisco, they risk creating the very dynamic that has seen once-dominant Tennessee Democrats pushed into a few urban redoubts.
When the cry goes out for “Power to the People,” the actions of city government over the next few years will see who answers the call.