The Fountain of Youth?

Swimming is Exercise for Life 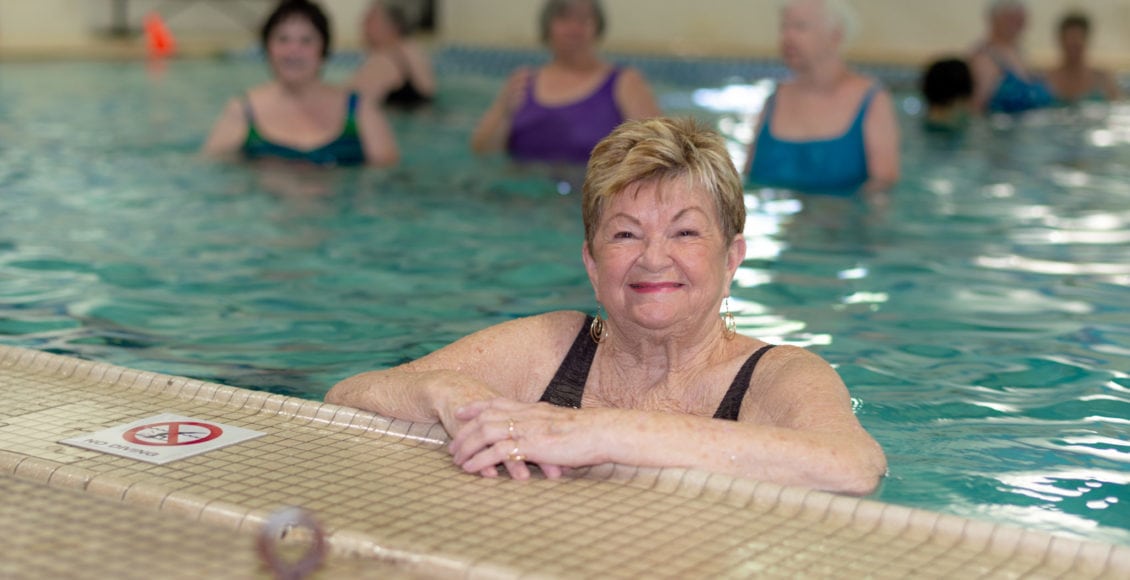 Fountain of youth? It’s more like the deep waters of youth, and you don’t even have to get your hair wet if you don’t want to—you can always exercise in the shallow end.

It is one of the best exercises to pursue as you age, but getting fit in the pool isn’t just for seniors anymore, says Amanda Roland, association aquatics director and senior program director at the Cansler Family YMCA.

Whether you want to become a triathlete, lose weight, tone up, or just have some fun, getting in the water is perfect. It’s certainly been great for Jim Froula, who has put in more than 1,960 miles in laps since he started swimming 26 years ago.

“Swimming improves health and your mental state,” says the 73-year-old Farragut resident. “When I was the director of an engineering honor society, I worked for a challenging board and one way I got through it was by swimming laps.”

As a kid, Froula earned the Boy Scout swimming merit badge. “I lived in a rural North Carolina county and the only swimming pool was at a girls’ camp,” he says. “The only time I swam there was one night when five of us boys climbed over the fence.”

If you’d rather not climb over a fence to improve your skills, open swim times and private swim lessons are available at the Cansler Y and at other Ys across town. So are traditional water aerobics classes in the shallow end of the pool—thus, dry hair.

At Ft. Sanders Health & Fitness Center, employee Lara Campen started lap swimming in college and is now in her 40s. “I’m going to continue to swim,” noted the triathlete, “because it can still keep me athletic and active in years to come no matter how old I get. At triathlons you have people competing in their 70s and 80s. You can get such a good workout for your cardiovascular system without the other forces that tug at your body. It lengthens your muscles at the same time. If you want a hard workout, you can push yourself cardiovascularly. You can also come in and have a nice easy swim that feels more like stretching and recovery.”

Campen has a 65-year-old client who did her first sprint (short) triathlon this spring.

“She just started learning to swim for the first time last fall,” Campen says. “She loves swimming so much that she wants to continue to improve her technique.”

At the Cansler Y, Roland’s private lesson students range in age from 3 to 70-something.

“To participate in our group exercise class you have to be at least 14,” she says. “We have people in our classes from their 30s to their 80s, and we have classes multiple times a week.”

In March the Cansler Y introduced the Hydrorider class that uses a spin bike in the pool.

“We got our first one and our membership loved it so much that we ended up getting seven more,” she notes. Roland is currently developing the area’s first water class for people with Parkinson’s disease.

“Several years ago we developed a class called Pedaling for Parkinson’s. One thing about people with Parkinson’s is they have that fear of falling. We work on their balance and taking their gait back to a normal stride. Once we accomplish that, we’ll put them on the Hydrorider. This application of a water-based spin class is new. I can’t find any research on it.”

Francis Archer moved to Knoxville from Chattanooga a year ago and has jumped in with both feet. The lifelong swimmer is teaching private swim lessons at Ft. Sanders Health & Fitness Center, but her background includes teaching water aerobics, coaching triathlon swimmers and swim teams, and competing at the national level herself.

“I had a student in Chattanooga named Jane,” Archer says. “She came in to water aerobics and during that time she was diagnosed with Type 2 diabetes. She started coming much more regularly and got it under control. Then she wanted to know how to swim. She was able to ride a bike and run, but didn’t know how to swim. I taught her to swim and she did a couple of sprint triathlons. I also had a Down Syndrome young lady who I taught to swim and she did a sprint triathlon. She was so thrilled.”

At the end of June, Froula came back from the state Senior Olympics finals in Nashville.

“I’ve been competing at the state level since 2014,” he says. “You have to qualify in the district to be able to go to the state, so I went to Gatlinburg in 2013.

“Our subdivision built a pool in Concord Hills and I’ve been swimming there since it opened in 1992. Basically, I had never been on a team and had never had a lesson until recently. I went to the state in 2014, and in 2015 I had my first lesson—because of competition. I found out I was swimming against men who had competed on the Purdue and Wheaton swim teams. I’d been doing elementary backstrokes. When I did a little investigation on my competition, I realized had to learn the real backstroke.”

It turns out that swimming can improve your mind as well as your body.

“Swimming makes you smarter,” writes author Dr. G. John Mullen in an article titled “10 Hidden Benefits of Swimming.” “Regular exercise, such as swimming, improves memory function and thinking skills. This is good not only for the classroom and work, but it is beneficial for us as we age too. Regular exercise reduces inflammation and insulin resistance in the brain, which fosters new brain cell growth. Swimming also improves mood, anxiety, and stress, which increases the brain’s ability to think more efficiently.”

Regular swimming can delay the effects of aging by reducing blood pressure, increasing muscle mass, improving oxygen and blood flow to the brain, and increasing cardiovascular health, he says.

“Swimming slows down aging,” he confirms. “The pool is like the fountain of youth.”

Firearms and The Law