A Mission to Feed

Second Harvest Food Bank has nurtured long-term partnerships and pursued innovative distribution methods to get food into the mouths of East Tennessee’s needy. 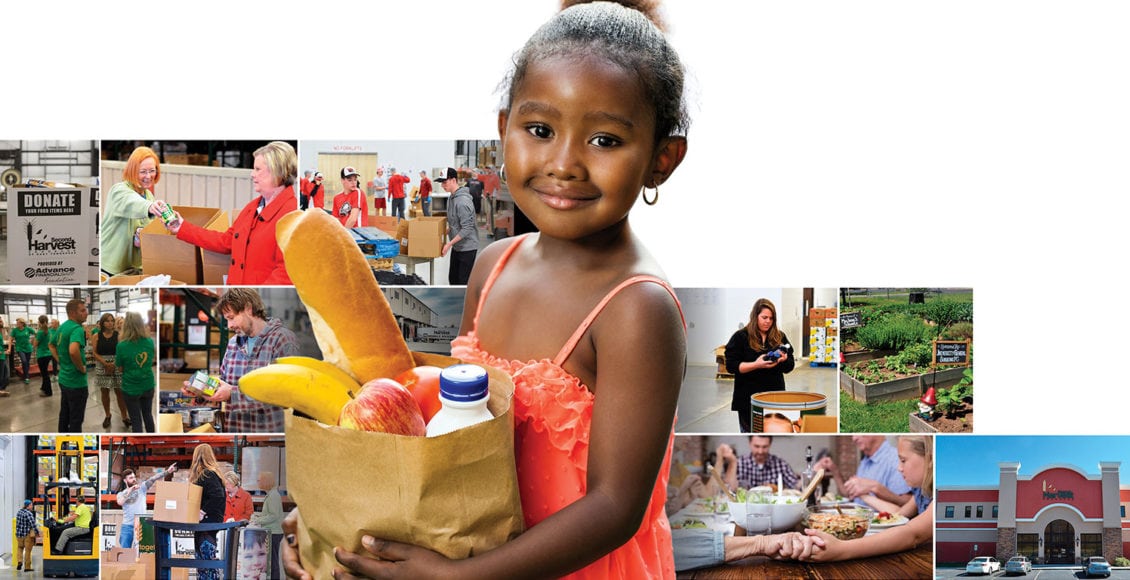 Inside a home in a neighborhood in East Tennessee a single mother struggles to make ends meet while trying to feed her children. Seniors in an affordable housing complex sit in their apartments feeling the financial strain of having to choose between medicine or food. A set of parents shop for what they can at a corner store because they live miles from the fresh food in a grocery store.

Food insecurity comes in many forms, and while the number of food insecure homes in the United States has trended down in the last few years, according to the USDA’s Economic Research Service, the issue is far from gone.

Nearly 15.8 million households in the country were food insecure at some point during 2015, meaning that they had limited access to “nutritionally adequate and safe foods,” those which meet the USDA guidelines. And while many organizations are working diligently to address this need, one organization has pioneered innovative solutions to meet the region’s food access challenges: Second Harvest Food Bank of East Tennessee.

Second Harvest opened its doors 35 years ago, hoping to lead the East Tennessee community in the fight to end hunger. The organization distributes more than 18 million pounds of food and other products annually to more than 500 partner agencies within their 18-county service area, an area that, according to Feeding America’s Map the Meal Gap Project, is home to roughly 184,000 people lacking access to food.

“The hunger issue in east Tennessee is very different and deep,” says Elaine Streno, Executive Director of Second Harvest. “How do we solve that? All of society has to get involved.”

Between running six distinct feeding programs, providing educational programming for partners, and managing an 80,000 square foot warehouse in Sevier County, Streno and her team of 38 have their work cut out for them. However, it’s labor that all those working and volunteering for the organization know is making an impact.

Second Harvest’s roots rest in Food Sourcing, a program through which nonprofit agencies are able to purchase food at bulk and heavily discounted rates. The food has been donated to the food bank by grocery stores, restaurants, distributors and other outlets. Pallets come to the organization’s facility for redistribution and with the help of volunteers are quickly broken down and disseminated out to the 18 counties.

Nearly 200 agencies place orders throughout the year, such as Knoxville-based Ladies of Charity, a nonprofit agency providing emergency assistance to anyone who walks through their doors seeking help Monday through Friday. The assistance can take the form of clothing, utility bill relief, medicine, rent, infant supplies, and of course, food.

“It’s been a long term relationship with Second Harvest,” says Susan Unbehaun, Executive Director of Ladies of Charity. “However, in the last two years we’ve really been building the strengths between the two nonprofits.”

Today, Second Harvest provides 90 percent of the food Ladies of ­Charity delivers to its constituents in their ­typical three-day food packages. Everything is purchased by the pound by the agency and is loaded up from Second Harvest’s warehouse into a 14-foot box truck to head back to the pantry.

“Maybe you just got laid off or something critical happened to you. Life happens to people and that’s what we’re here for,” Unbehaun says. “[Our partnership] really makes a difference in how much we can supply in food.”

Ladies of Charity orders from Second Harvest once a week, but their purchased product from the food bank is supplemented by what Second Harvest provides them free of charge every other week through their Food Rescue program.

The Food Rescue program began in 1992 as the team at Second Harvest recognized food in good condition being wasted in the community. Through the program, Second Harvest gathers prepared and perishable foods from restaurants, grocery stores and other local sources that might otherwise be tossed and instead distributes it to communities.

“We are able to take as much as we need of that, and that’s just free food getting delivered to us to share,” Unbehaun says. “That is an unbelievable community support effort so that grocery stores and restaurants aren’t throwing it away and so the people we serve get a selection that they don’t normally have in their regular food package. It’s a real treat.”

The Innovation of Feeding

As the Food Rescue program celebrated nearly a decade of service, Streno found herself at a Feeding America Conference listening to fellow food banks talk shop about their weekend child feeding programs. “They were started because children were going home on Friday nights and not getting food on the weekends,” she says.

She worked diligently with her team to implement the Food for Kids program, partnering with public schools in the 18 counties to discreetly provide backpacks filled with healthy, easily prepared foods to children identified as at risk of hunger. Roughly 11,000 children participate in this program annually.

Robin Rolland, Director at Compassion Ministries, serving local communities through a host of service programs, says the program opened the eyes of her community in Farragut to the fact that there are many children they hadn’t realized are in need.

“We have 149 kids a week in the two schools we serve, and Second Harvest said absolutely, we can make this happen,” Rolland says. “They brought us food, and we packaged it. Then once a week we dropped them off at the two schools. It’s our community responsibility to take care of them.”

Three days’ notice is all Second Harvest requires to fulfill a need for a community looking to feed hungry children.

Taking the Warehouse on the Road

While much of the organization’s work involves partnering with pantries to feed their constituents, not everyone who falls in the hunger gap has access to a pantry. This conundrum led to the development of the Mobile Pantry program. Through this innovative program, Second Harvest sells truck loads at low cost to agencies, who then take them to food deserts and outlying counties in order to feed the hungry. The organizations bring the trucks to the community parking lots and allow constituents to select the food they need.

Ten times a year, Rolland and her team of volunteers partner with Second Harvest to bring trailer loads of food to communities in the Appalachian Mountains. They paper the schools with flyers and arrive on a designated day with a freezer truck, box truck, and a trailer filled to the brim with food and other products, such as school supplies and even makeup. Volunteers spend an entire day setting up a school gymnasium like a grocery store to provide an easy space for families to stretch their budgets.

“We don’t have to turn anyone away. We give $200 to $250 worth of food to each person or family, and we can only do that because Second Harvest walks beside us,” she says.

“When we go into a community with Second Harvest, we’re taking in staple stuff, good foods that have a long shelf life where people are going to be able to eat better and eat healthier. It’s an encouragement to them that somebody out there really cares, that there’s an organization out there reaching out trying to help people up in the mountains.”

The concept has been wildly successful and so Second Harvest began what they call the Rural Route, a similar type of program wherein Second Harvest delivers food to nonprofit organizations that lack the necessary funding or equipment to travel to the food bank.

The organization’s newest program is the Senior Outreach Program. It was started just a few years ago, prompted by concerns about grandparents raising their grandchildren while dealing with the rising cost of healthcare. Second Harvest now collaborates with senior feeding agencies to help on the weekends, as many programs typically only provide assistance during the week.

On a typical Tuesday distribution day, volunteers unload the truck, set up tables, and unpack products. And when it’s time for the residents to come in, they draw numbers for the order in which they are allowed to shop. “We do it totally random so there’s equity for everyone,” Conway says.

There’s no cost to the agency, and there’s no cost to the residents to participate. “It would be a struggle to provide a duplicate service for our seniors,” Conway says. “I know that they depend on it so desperately at times just to make their budgets stretch…. This partnership is invaluable.”

The people Streno serves on a daily basis tend to bring back memories. She grew up one of four children in what she calls “a chaotic childhood.” She moved 23 times before she turned 18, and there were many times where she recalls the church, along with extended family, helping her family to make ends meet. And yet while her childhood was anything but easy, the impact this help had on her life made her feel that she had a mission to carry it on.

“It gave me the incentive in my mind that if I ever could give back, I wanted to,” she says.

And that’s what brought her to Second Harvest. Today, 23 years later, she still loves her work and continues to seek innovative solutions to the region’s food access challenges.

“I’m trying to make an impact on even just one person, not just me, but our whole staff,” she says. “We’re trying to change what people have to deal with.”

Conway has watched the impact this organization has had on the seniors she serves and to her it’s making the impact that the community needs. “You go all over the Knoxville area and the outlying areas and Second Harvest is there, touching lives way beyond our little microcosm of what we do,” she says. “It’s a real lifeline to our community.”