A Nose For Justice 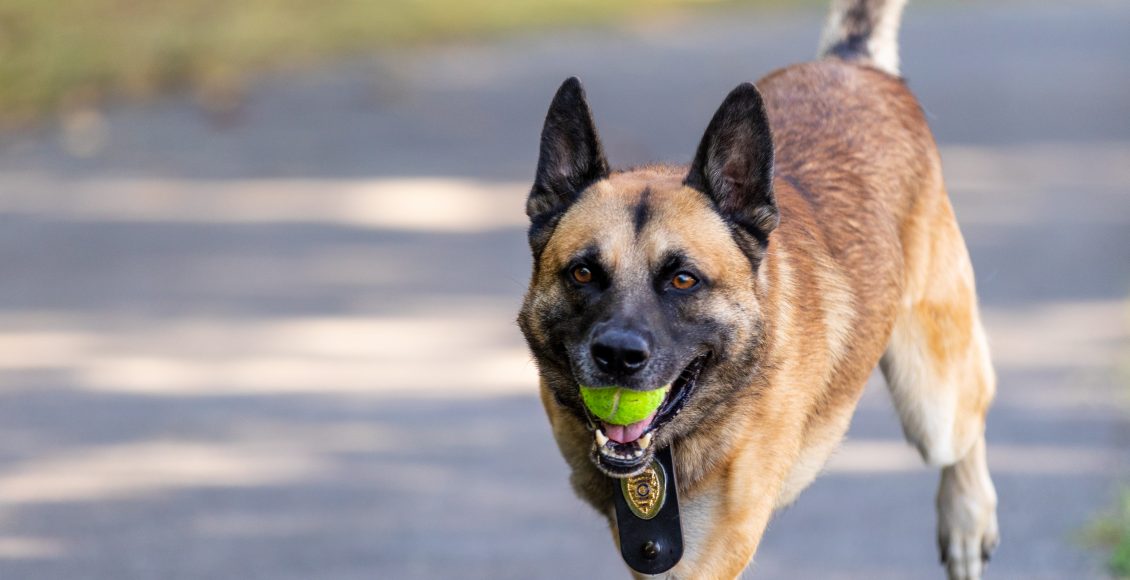 Police dogs have been helping the Knoxville Police Department (KPD) take a bite out of crime for more than a century. It all started in the late 1800s, when bloodhounds were used by the KPD to track fugitives. The use of police dogs at the KPD for other functions began sometime in the 1950s or 1960s. At that time dogs were mostly used for apprehension of suspects and protection of police officers.

Modern police dogs make even greater contributions to police work. Their ability to find hiding suspects, missing persons, crime scene evidence, explosives, or contraband is simply amazing. It is widely thought that a police K-9 searching an area can effectively do the work of ten human officers. They often succeed in their tasks when everyone else has given up hope.

The KPD has 14 dog teams, and most of the dogs on these teams come from special breeders in Europe. The most common breeds of dogs currently used by the department are German Shepherds, Belgian Malinois, and Dutch Shepherds. But sometimes, more unusual breeds are employed. For instance, a department in Ohio uses a Dogo Argentino, and locally, there is a giant Schnauzer that performs police duties.

Police dogs don’t come cheap. Even untrained dogs can cost around $9,000, and fully trained dogs can cost even more, as much as $17,000. In order to conserve funds, the KPD purchases untrained dogs and trains them in-house. There are three master dog trainers that work for the department and teach the dogs obedience, odor recognition, tracking, and all of the other skills that a fully trained police dog needs to know. Working dogs continue to receive bi-weekly training maintenance from the master trainers throughout their careers, as well as on-the-job training from their handlers.

KPD dogs are not only well trained, they are periodically scientifically tested for reliability in evidence finding, particularly for narcotics. KPD drug searching dogs are trained until they can demonstrate a 90 percent accuracy rate in finding drugs. These dogs also go through annual certification tests through the International Police Work Dog Association (IPWDA.org).

Each dog has its own designated human partner on the force. We spoke to KPD Officer Brian Mullane, who has worked with police dogs for the last 11 years. He has had two K-9 partners – Rocco, a Dutch Shepherd, and Milan, a Belgian Malinois. Officer Mullane explained to us how K-9 units spend an enormous amount of time together working as a team, relying on each other for safety and guidance. This creates a very strong bond between human and K-9 partners.

Officer Mullane recounted to us one of Rocco’s exploits where they were attempting to find a burglary suspect who was fleeing through a heavily wooded area. Rocco tracked and apprehended the suspect, who was trying to escape detection by hiding in a nearly impenetrable thicket of briars. After catching the perpetrator, Rocco returned to the criminal’s vehicle and located drug paraphernalia. Later, when the victim’s stolen iPad could not be located, Rocco searched the suspect’s path of flight and found the stolen item in a large leaf pile where it had been concealed by the thief. Performing these tasks would have been difficult or impossible for a human officer, but Rocco’s training and skills allowed him to accomplish them with ease.

Rocco retired after eight years of exemplary service. After his retirement, Officer Mullane received his new K-9 partner, Milan. Not long ago they were asked to locate and apprehend two suspects that had fled on foot from a stolen vehicle. After an extensive search of the area, Milan’s keen nose detected the suspects’ odor coming through an eight-foot fence. Milan and Officer Mullane found a path around the fence and began moving through some extremely dense underbrush. The area was so thick with branches and growth that Officer Mullane’s visibility was limited to only a few feet. Milan was working at the end of a twenty-foot lead, and out of sight of his partner, when he suddenly stopped and began barking. To Officer Mullane’s surprise, Milan had located and trapped the suspects, who had fled upward into the trees to escape the police K-9. Upon the arrival of Officer Mullane, they surrendered without further incident.

During their working years, many K-9s live at the homes of their police partners, while others live at a specially constructed kennel facility at the KPD. Most K-9s work until they reach retirement age of 8-10 years old. After retirement, many dogs are adopted by their human partner, or by another dog handler in the department, and enjoy their golden years with their human families.

K-9s make a significant positive contribution to police work, and their potential out in the line of duty continues to grow with new training techniques and implementations. In our appreciation for the police officers dedicated to keeping our community safe, let us also tip our hats to the K-9 officers taking police work to the next level.

Rick Sparks spent his childhood raising and caring for a menagerie of animals, everything from the usual fish, hamsters, and dogs, all the way to rats, snakes, and giant catfish. After a two-decade career working as a medical physicist in drug development, he returned to veterinary school. Rick has also worked at a wide variety of other jobs along the way, including musician, bartender, raft guide, commercial credit analyst, adjunct professor, and nuclear medical science officer. Rick currently resides in Knoxville, TN with his wife, son, and two weimaraners.

Out on the Trail