Every week across Knoxville there’s a party with music, atmosphere, and lots of talking—and you’re invited.

Actually, the party has some exercise thrown in, and well, technically, the party is known as “bowling.” But for those addicted—high school students from Hardin Valley to Gibbs and for adults of all ages—it’s lifeblood, something they can’t live without.

Knoxville native Sharon Cross lives in Louisville. She was at Strike & Spare Family Bowl on Hayfield Road a few Mondays ago with her pink bag and blue and yellow ball. She says she joined the league to make her mom happy, but has found that she loves it too.

“I just retired last May after 42 years at Patricia Neal Rehabilitation Center,” Cross says. “My mom, Betty Newman, bowls here. She says, ‘Oh I think it would be so much fun if we bowled together.’ I’m like, ‘For her, I’m going to do it.’”

Cross is a member of the Ten Pin Haters team and her mother is on the Yoyos, so there’s some competition going on.

“I like the socialization with everybody, the friendly competition,” Cross says. “I’m learning really. I actually just started in the fall. I’ve made some really nice friends. My husband is still working but he’ll join me when he retires.”

Cross is just one of nearly 200 who participate in the 50-plus senior leagues at the Strike & Spare in West Knoxville, Fountain City and Western Avenue, says Wendy Cox, general manager of the three facilities. She says the facilities offer other leagues as well that include children, youth, college and younger adults.

“At Strike & Spare in West Knoxville there are 16 teams of four,” Cox says. “At Fountain City I have leagues where seniors can walk in and bowl. Thursday at Fountain City is my biggest group. They call it a ‘coffee league.’ Western Avenue has 10 teams. I’ve got some husbands and wives who don’t bowl on the same teams because the husband wants to tell the wives everything they’re doing wrong. But overall, I think everybody’s having a blast.” 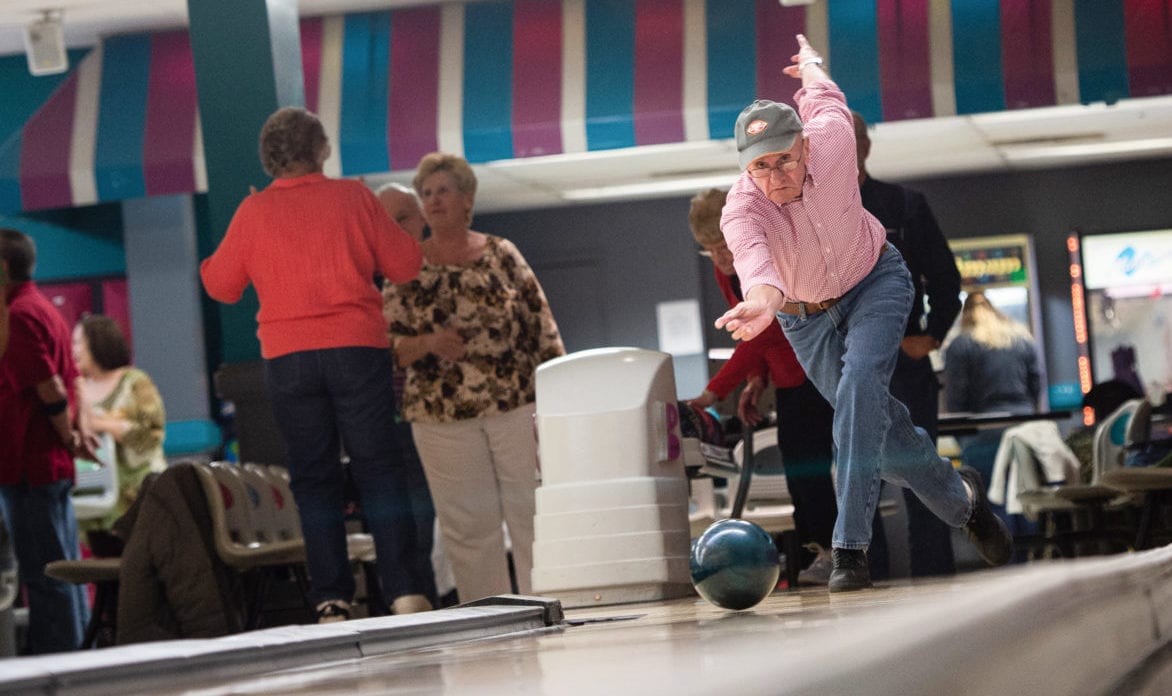 “I bowled on leagues up in Ohio,” says Carl Altvater. “I moved down here in ‘93 from Sandusky. I started bowling when I worked at Ford Motor Company in Sandusky. I got on their morning league and bowled at 9 a.m. I had a 175 average then. Now it’s 132. If I could get my line right, I could bowl 200 easy, but I’m a southpaw.

“I’ve got a 16-pound ball laying in the rack. I’ve got one at home I won at the banquet we had for the team I was on. It’s one of those Hammer balls. It’s orange. That’s why I like it–just like the Tennessee Vols.”

Altvater retired from ARC Inflator in March, but he’s not sitting still. In addition to starting a new business, he’s bowling.

“I came over here and inquired if they had a senior bowling league and they did. I started with the Two and Two team with Imogene, Carol, and Howard. I come once a week. We start warming up around 12:30 and we’re usually done by 3:30 or 4. I like the exercise, friendship and talking to each other, meeting other people from different areas.”

John Tolson was born and raised in Halls. He’s also on the Ten Pin Haters.

“We’re ranking 13th,” he says. “I spent about 40 years in California. My wife died and I remarried and found a California girl who’d come to Tennessee, if you can believe that. Maggie and I live out in Kingston. We’ve been married 20 years and moved back from California in 2000.

Is he the best bowler in the league?

“Oh no,” he says, “I’m one of the 15 best bowlers. I’m not bowling up to my average right now. I’ve got a left knee implant and I’ve got a nerve and muscle disease. I’ll be 83 in June. It’s a great league, a great bowling alley. These people, they’ve been through as much or more than me in life. The fun we have, the camaraderie. Old people, we can tell tales and things like that.” 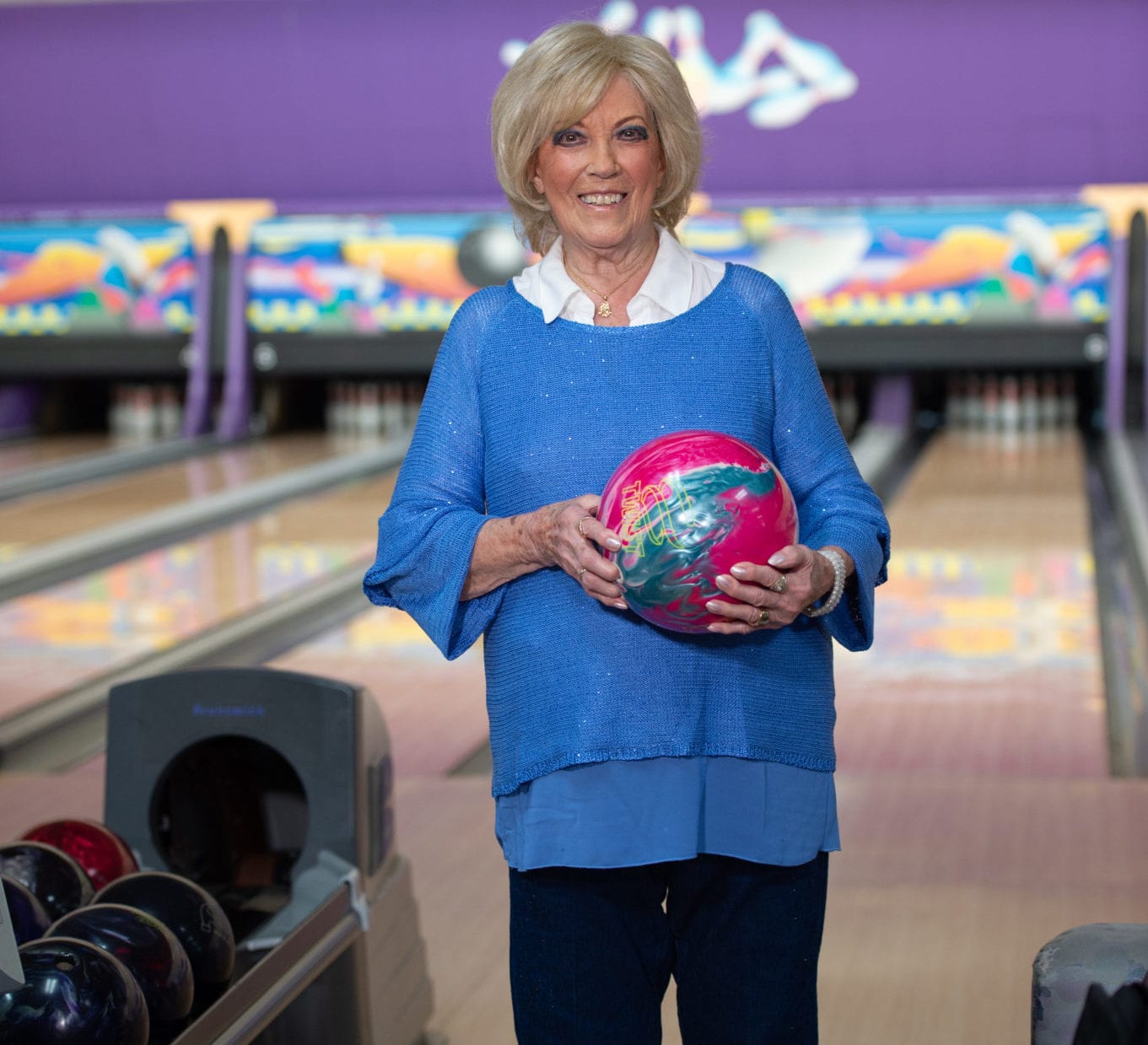 Across town at Western Avenue, Cedar Bluff resident Meg Ruckman has become quite a legend. At 100 years old, she has bowled for the last 40 years and is still going strong.

“I came here from Charleston, West Virginia, in 1978,” she says. “My husband Gilbert was retired from Dupont and our daughter was living here. I guess I was bored. Our daughter, Sandy Nguyen, was already a bowler. She was giving me a hard time, I guess. She said ‘You’re going to get into bowling.’ I’ve been bowling ever since.

It gets in your blood and you have to bowl. It’s the worst thing in the world if you don’t get to bowl. If you get hurt or you get sick, the first thing you think, is ‘Oh I can’t bowl!’ That’s the way it is with every bowler. I was 60 when I learned to bowl. Most people have bowled and quit by that time.

“I couldn’t begin to tell you how many bowling balls I’ve owned. Right now I have a closet full. Dozens. When I could use a heavier ball, Columbia Ricochet is the one I liked better. Now I have a Brunswick Twist. I have to buy a ball made in a 10-pound weight. It’s a really pretty pink with blue and snow.”

Ruckman has also bowled in West Knoxville and in Oak Ridge, but has been back at Western Avenue for the last six to seven years on the four-member Hotshots team.

“I think bowling is good for you all the way around,” she says. “It gives you something to look forward to that you enjoy. You get out and see your friends. I have a lot of pain in my back and hips. Bowling doesn’t hurt it any. I think it even helps.”

What’s her advice for someone turning 60? …  “Get out there and bowl!” she says. 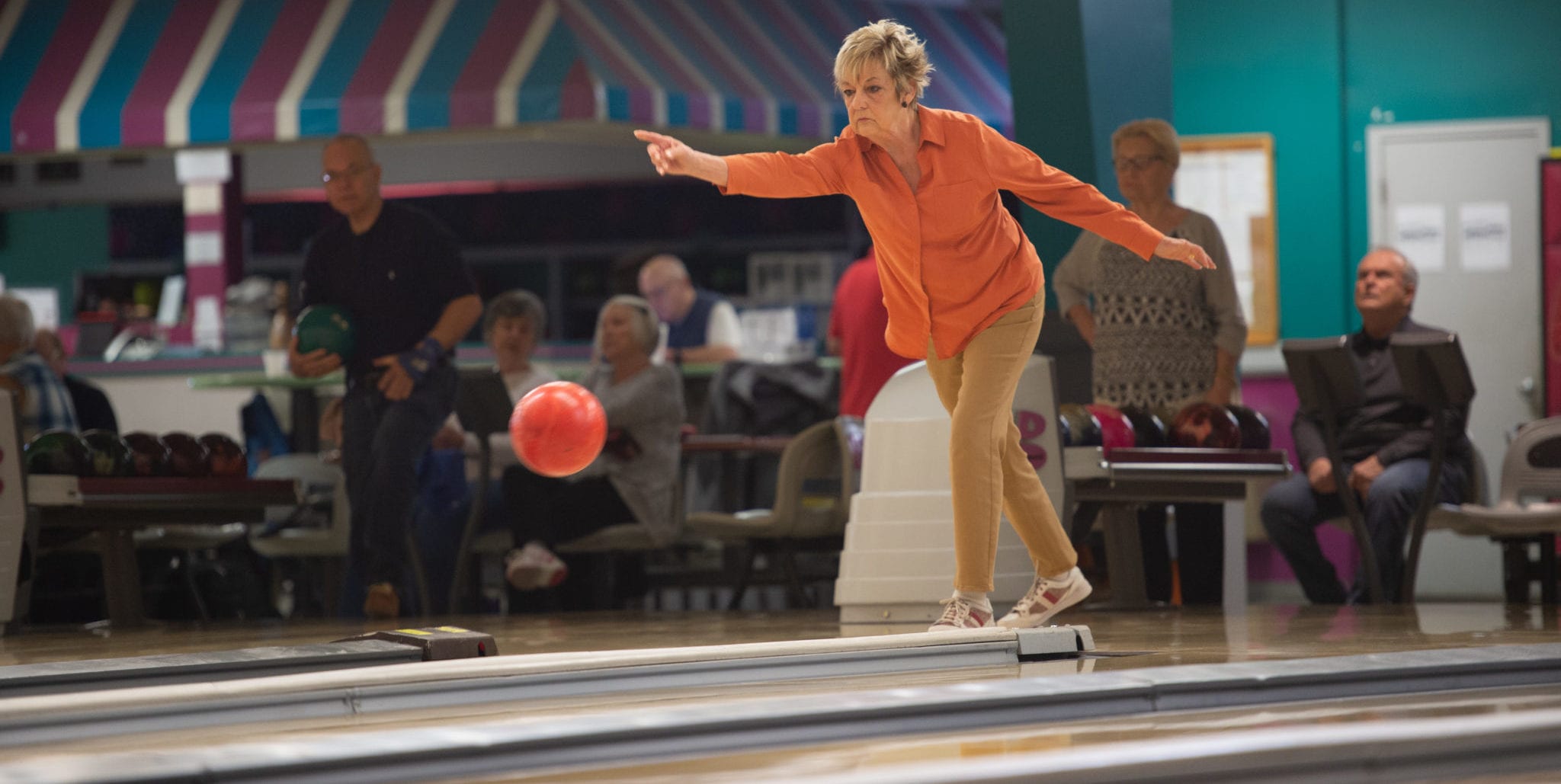