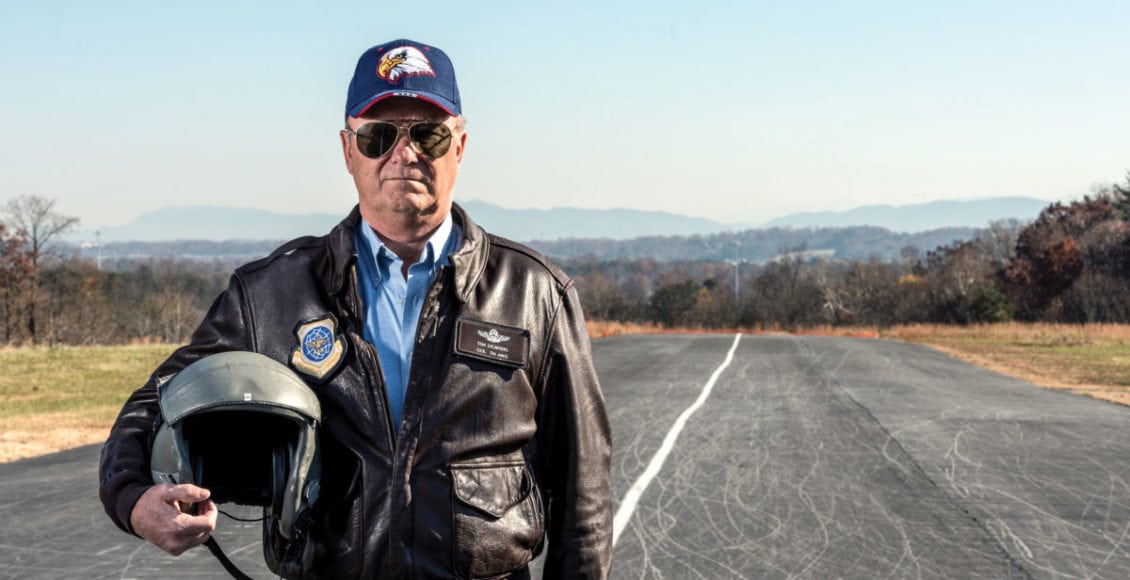 Retired USAF Colonel and former Wing Commander Tim Dearing lives in a comfortable home not far from Tellico Lake, with his wife Lisa, their daughter Harley, and three shy cats.

The house is filled with family photographs and keepsakes, sunlight, and the color of Big Orange. There is a Christmas tree dedicated to the University of Tennessee Volunteers. “It stays up year-round.” All the mementos of Tim’s long military career are downstairs, among them his Shadowbox, presented to him upon retirement. It’s about four feet tall and wide and it displays an impressive number of patches and medals. “I really have spent my whole life in the service. When I was growing up, there was a Naval air station in Hutchinson, training Navy pilots, but they transitioned that into an Air National Guard unit. I would go out to the base with my dad and go up into the control tower with the guys and watch them control airplanes.” Tim grins. “I’m not going to say I talked on the radio, telling them they were clear to land… but that probably happened more than once.”

Tim was born November 25, 1953 in Hutchinson, Kansas, to Tom and Shirley Dearing. Tom served in the Navy and then the Air National Guard. Tim entered the service himself in 1973, while attending Hutchinson Community College. With 60 credit hours, he was allowed to take the AFOQT (Air Force Officer Qualification Test), the pilot training test, and the navigator test. Tim qualified when he was 19 years old and was flying a jet a year later. “I was so wet behind the ears, I was dripping,” he says. When he began testing at Craig AFB near Selma, Alabama, Tim and his fellow recruits faced possible service in Vietnam, but the war was ending as they graduated in 1975. Tim went back to Kansas and started flying B-57s with a bomb group based at Forbes Field:

“Those airplanes had just returned from Vietnam and the team was switching from the bombardment part of it to electronic warfare. The airplane was full of electronic gear and the mission was to go out and find holes in the radar systems coming into the United States. So we go out, fly over the ocean, and try to sneak back into the country while the fighters come and intercept us. If we made it through, there was something not-quite-right there, and they would adjust the coverage.”

Under the Strategic Air Command (SAC), Tim transitioned to the 117th Air Refueling Squad and then flew different versions of the KC-135 Stratotanker, air-refueling aircraft for most of the rest of his career. Refueling missions for NATO took Tim out of the country for the first time in 1980: to Royal Air Force Mildenhall, in Suffolk, England; Morón Air Base in Spain; Osan Air Base in South Korea; and Cairo West Air Base in Egypt. In 1983, Tim was moving back and forth between the Air Force and the Air National Guard and spent time at the Pentagon, devising “what if” scenarios and building operational plans:

“A good example: The First Gulf War. That scenario had been looked at really hard because you had Iran and Iraq fighting all the time. And so, if that fighting spreads out of there, what are we going to do to contain it?”

Air Base in the Sky

Tim was a Major in 1990 when he was deployed to Jeddah, Saudi Arabia, and immediately assigned to help plan the air refueling missions for fighters flying into and out of Iraq. The protocol for refueling: The jet flies underneath the fuel tanker, 22 to 25 feet below, as a telescopic boom is lowered into the fighter’s fuel tank. The logistics of this task are daunting, to say the least:

“Some of them refuel in the 20’s [20,000 feet in altitude], some of them can’t get that high and we’ll refuel in the teens. You agree with the other pilot to meet at this certain point in the sky at a certain time. I helped coordinate that. All these planes had to be separated by miles and altitude and it had to be choreographed to the second.” Tim points to his Bronze Star. “The reason I got this is that during the war, we did not lose one sortie.

The Gulf War was personally challenging for Tim. He says in all his time flying in the military, he never really worried that he would be shot down and that anytime something went wrong on a flight. his training kicked in and he always landed safely. But it’s obvious that Tim’s time at war weighs heavily on him. “I don’t think anyone really understands that, going to war. Knowing some of the things you’re doing, and for me, the challenge, knowing where all those airplanes are going and knowing which missions are the most dangerous missions, and putting a name… I still think about it. Those are your best friends, I always worried about signing their death warrant.”

For several years after the war, Tim, then a Colonel, moved around a bit: to Hickam AFB in Hawaii and Elmendorf AFB in Alaska, as Tanker Task Force Commander (a highlight of that posting was flying F15s in Alaska); back to Forbes AFB as Maintenance Commander, then Operations Group Commander; and then to Tinker AFB in Oklahoma, under the Pacer CRAG project. Under Pacer CRAG, the Stratotanker was being refurbished and upgraded, specifically with a glass cockpit. Tim helped write the requirements and specifications for potential contractors and he test-piloted the airplanes as the upgrades were made.

In 2000, Tim had one year left before he could retire and he had three choices for the next phase of his career: going back to the Pentagon in planning; working for the Defense Logistics Agency; or coming to Knoxville McGhee Tyson’s Air National Guard Unit as an Air Force Advisor. “I actually started my career in Knoxville. In January 1974, that’s where officer training was held. For eight weeks I was here, and became a Second Lieutenant. I loved the Knoxville area back then and my wife had been here; we had a lot of friends here from the military, people I’d met in the Gulf War, so we made the decision: ‘Let’s go there.’” The year went by and Tim’s work with the Pacer CRAG project continued here in Knoxville with the 134th Air Refueling Wing. He was prepared to retire, but the Wing Commander asked him to stick around another year to prep for an inspection. That year went by and then a new Wing Commander asked him to stay on to assist with the transition. In 2004, Tim gave up on retirement when he was asked to become Wing Commander. “I think it was the best thing I ever did in my career.”

It should be noted that Tim really likes to fish. In 2009, he was contacted by the Fishing League Worldwide (FLW). The FLW brought their National Guard team to the base at McGhee Tyson and Tim took them on a refueling flight. “After that, I decided to be a co-angler, competing against all the other guys who were in the back of the boat. They put me on the National Guard team to do that, and I got to travel all over for two years prior to leaving the military.”

In 2011, Tim was offered a promotion to General, which would involve a move to Washington, DC. He talked to his wife Lisa about it, and she said, “Would you consider retiring? I know you want to fish. You know, you’re not that young anymore.” He laughs. “She talked sense into me. One of the hardest things I had to do was call the General up there and say, ‘We’re not coming.’ In the military, that’s unheard of, to turn down a promotion.” He finally retired with 37 years and 9 months of service and is nothing but thankful for that career. “To get to fly and do all the things that I did, I got to serve in Tactical Air Command, Air Defense Command, Strategic Air Command, Air Mobility Command, Air Force Material Command, I got to see how those all fit together and operated.

After retirement, Tim found success as a professional angler and lived the fisherman’s dream until early 2016, when he hurt his back: a rough boat ride on Lake Champlin started the process, “but what really aggravated it, and this is ridiculous: I was buying 50-pound bags of potting soil and was loading my truck and twisting and I ended up damaging some discs.” The injury put an end to Tim’s professional fishing career, but led to an opportunity to work for Lowrance, a company making and selling fish and depth finders. “Because of my background in flying and avionics, working these fish finders is just second nature to me.”

Fishing aside, Tim’s love for airplanes endures and he remains a pilot. “I got into remote-controlled airplanes. There’s an airfield over at the Maryville landfill. I love flying World War Two airplanes and they’re good-sized airplanes. So, we meet over there, fly until about noon, go have lunch, and then after that, I’ll go pick up my daughter from school. Tough life.” Tim seems truly pleased with and grateful for that life. He says his mentors in the military taught him to treat his people well, to see every opportunity as a chance for growth, and “to not self-eliminate.” Tim has four children, three from his first marriage. His son Tom serves with the USAF at Knoxville McGhee Tyson. His youngest daughter, Harley, wants to be an astronaut and engineer; she’ll soon be back at Space Camp in Huntsville, Alabama, for the third time. Tim challenged her to build a remote-controlled airplane and “to make it better than it was out of the box. And she did. I mean, it impressed me. She even redid the wiring, figured out a better way to wire the receiver to make it work better. I was like, WOW. I hope she pursues that. I have always tried to instill in her: Never self-eliminate. See the vision. Always strive to get there.”