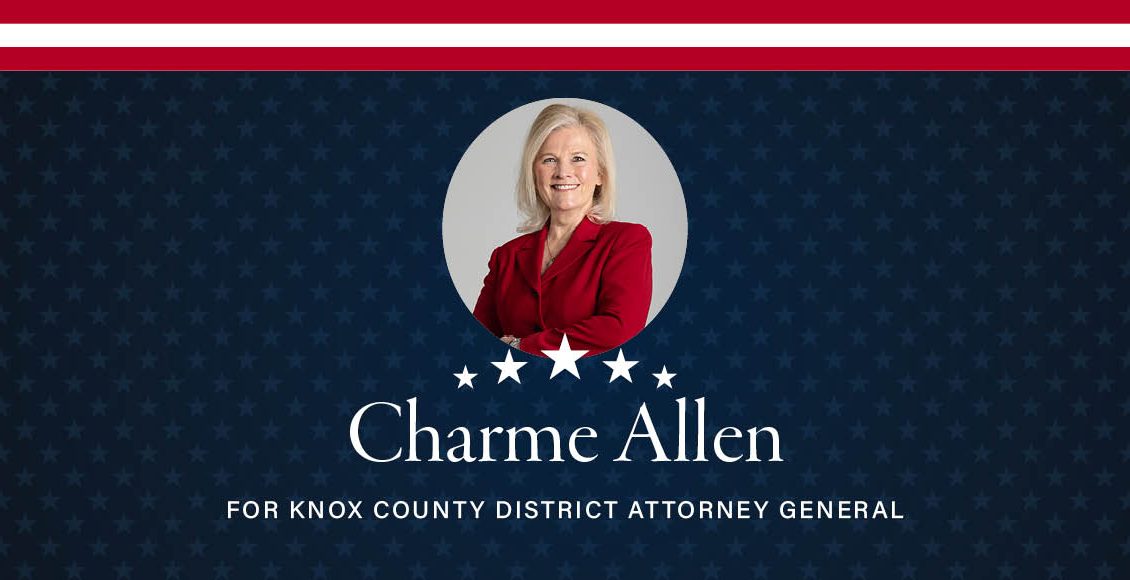 Tough on Crime, Smart on Prevention

Charme P. Allen is known for her “tough on crime, smart on prevention” approach to public safety. She has answered the prosecutor’s call to pursue the guilty and protect the innocent for more than 30 years. As Knox County’s District Attorney General, she has used her experience and passion to advance the policies and procedures that dictate how justice is administered in Knox County and invited the community to a front row seat through deploying the Office’s first Community Affairs Unit. In the upcoming election, General Allen is seeking to serve the citizens of Knox County for a second term.

What does justice mean to you?

Justice means doing the right thing for the right reason. Prosecuting cases is not about winning, it is about seeking justice and justice can look different depending on the case. For instance, justice can look like sending a violent offender to the penitentiary for life or other times justice can look like dismissing a case because there isn’t enough proof. My main charge is to seek justice. And that charge has not changed since I joined the Knox County District Attorney General’s Office in 1989.

How have you been “tough on crime?”

I believe serious, violent offenders who prey on our community’s most vulnerable populations should be held accountable to the fullest extent of the law. After taking office, I restructured the office to have specialized prosecution units to focus on our community’s most egregious crimes. Because the prosecutors receive specialized training and gain a high level of knowledge about the makeup of specific types of crimes, they are best equipped to remove dangerous criminals from our neighborhoods.

One example of this approach is my Felony Drug Unit’s work with the Drug Related Death Task Force. The task force is a concerted effort for law enforcement and other community agencies to treat overdose deaths as criminal investigations. Instead of just prosecuting drug crimes, we are charging drug dealers with Second Degree Homicide when their drugs lead to the death of another person.

Why do you feel prevention is an important part of your job?

If we can prevent crime from happening in the first place, then we have fewer victims of crime, which, ultimately, is the goal. Through prosecuting child abuse cases for most of my career, I learned that one of the best defenses against crime is raising awareness through education. That is just one reason why I created the Community Affairs Unit. The Community Affairs Unit provides a direct link between the District Attorney’s Office and the citizens of Knox County to prevent crime in our community.

How important is it to you to meet the needs of crime victims?

Meeting the needs of crime victims is important to me personally and professionally. Every victim who comes in my office can expect to be treated with dignity and compassion. The prosecution process can be daunting and confusing. My victim witness coordinators and prosecutors are there to assist crime victims throughout the entire process.

I created designated areas for victims to use during interviews or trial proceedings.  Being in the same location as the offender, who either hurt you or a loved one, can be extremely stressful and traumatic. The crime victims who walk through my doors have experienced horrific events. It is important to me that we do everything we can to protect them during this difficult time.

Fair and Honest: A Judge for the People