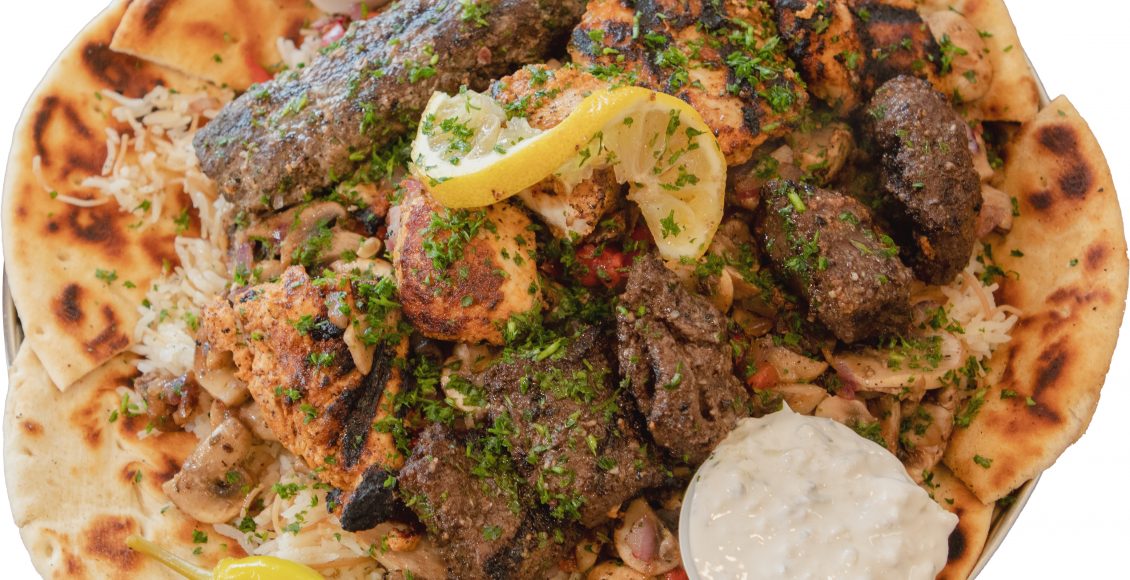 If it’s lunchtime and you’re ravenous, you might consider the Holy Grill. That’s the tasty combo from Holy Land you see above: chunks of lamb, marinated chicken and Arabic hamburger served over rice, roasted red peppers and onions, along with pita bread and sauce. It’s just one of the many tasty items we head for when we’re heading out at noontime. On the following pages are some of the lunchtime restaurants and markets the Cityview staff can’t live without. Many offer outdoor dining options.

Calhoun’s has always been known for its generous salads.  The oriental chicken salad is the go-to salad for our creative director. This fall, Calhoun’s is featuring a salad that combines her two favorite things, salad and BBQ.

With locations in Bearden, Farragut and Alcoa, The Shrimp Dock offers fresh seafood in po’ boys and baskets with Cajun sides as well as the best clam chowder in town! While you’re there, pick up some fresh seafood for dinner, like shrimp fresh from the Gulf or wild salmon for the grill.

When we’re downtown and having hunger pangs, Market Square is a great place to be, and Not Watson’s Kitchen + Bar offers a broad menu sure to please, from sliders and scallops to salads and  burger options. And the tater tots?  Make it a double!

Our managing editor loves catching up with friends over chicken tikka masala and naan at Sitar. While their lunchtimee buffet has been suspended during COVID, ordering from the menu is still a great option.

The French Market offers both sweet and savory French crêpes, delicious baguette and croissant sandwiches, plus a choice of soups and salads. They also carry imported goods at their two locations.

Whether it’s their Grilled Tuna Sandwich, a Chicken Finger Platter or a Perfect Pair, the menu at Aubrey’s always serves up something that hits the spot for lunch.

Offering daily specials and classic deli selections, like the Reuben pictured above, Holy Land caters to Middle Eastern and European recipes. When nothing but a gyro with tzatziki sauce will do, this is the place to be.  Holy Land is also a Middle Eastern market, so stock up on the ingredients you can’t find at the grocery while you’re there.

When TGIF is all you can think about, head to the scratch kitchen and craft beers at Balter Beerworks, located in a rehabbed service station downtown. Share some potato chip nachos with a friend, then dive into sliders, fish street tacos, a burrito bowl, beer cheese soup or lots of other tasty options. Cheers!

If it’s Monday after an indulgent weekend, Tomato Head is where we find healthy options for lunch, like a hummus plate or a Greek salad. Of course, the sandwiches and pizzas might lead us astray, and the desserts? On a Monday? Why not!?