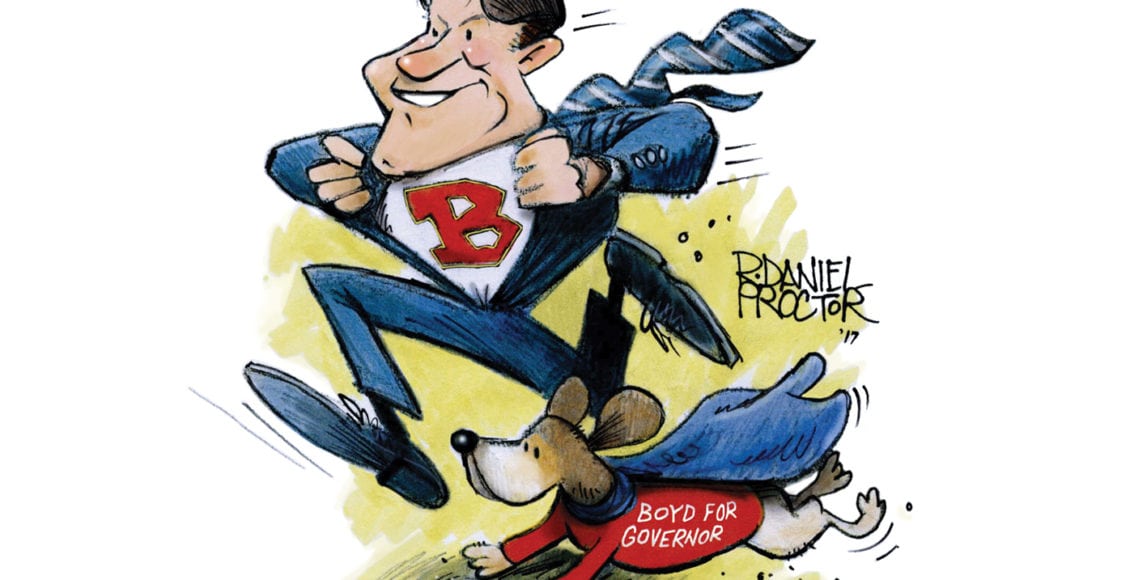 A cardinal rule of political campaigning is to define yourself before your opponent defines you.

The campaign for the Republican gubernatorial nomination offers an object lesson for political candidates and would-be candidates: Take care in how you define yourself even if you think you’re defining yourself carefully.

There are three principal reasons political candidates who’ve defined themselves in one way must sometimes undergo a redefinition:

Boyd is wealthy, well-spoken, well-positioned, well-respected, and has been well advised to be well rid of the manner in which he once defined his political thinking.

Tennessee is today among the reddest of the Republican-red states. The chill on Democrats’ Tennessee fortunes began with a snowfall under President Bill Clinton and roared to an avalanche during the presidency of Barack Obama. As the national Democratic Party moved left, Tennessee’s more conservative Democratic voters were abandoned. In response, a conservative state became more conservative. Republican candidates enjoyed the benefits.

Being defined as liberal, moderate, or conservative, matters. A lot.

Boyd is wealthy, well-spoken, well-positioned, well-respected, and has been well advised to be well rid of the manner in which he once defined his political thinking.

In a “Conversations” interview in the Jan/Feb 2017 issue of Cityview, Boyd, when described as a “Frist/Corker/Haslam type,” said, “I’m honored to be considered in the Frist/Corker/Haslam group because I admire all of those gentlemen…”

On April 1, 2015, the Knoxville Mercury, a weekly paper, published an interview with Boyd, who offered this description of himself: “I’m probably the most hated, disrespected, untolerated political entity in existence,” he says. “I’m a moderate.”

Among some conservatives, them’s fightin’ words.

An example: The Tennessee Star is an online conservative publication in Nashville that would like to make Boyd eat his words of moderation.

How many people actually read the Tennessee Star is to some degree irrelevant in the age of internet and social media. Word gets around. However, the “I’m a moderate” quote appeared in many news stories about Boyd’s campaign announcement, such as that from the Associated Press. After referencing the Knoxville Mercury quote, the AP article says: “Boyd’s self-description had evolved when asked about that comment in his AP interview, saying ‘I don’t generally like labels’.”

Boyd’s campaign website’s home page five times uses the word “conservative” to describe him and his philosophy, which indicates some labels are better than others.

If he was already thinking of running for governor in 2015, Boyd needn’t have defined himself so staunchly. But words once spoken being what they are, Boyd’s campaign appears to be correcting an unforced error that can affect the campaign.

His campaign knows primary opponents will with nauseating frequency regurgitate the “moderate” comment. They also know that most Tennesseans up to now haven’t been paying much attention to the governor’s race and that it’s in the coming months that voters will define Boyd for themselves. He has the time and money to overcome his political misstep.

In today’s conservative-RINO debate it’s questionable if Ronald Reagan could get conservative backing. As Reagan himself said: “Die-hard conservatives thought that if I couldn’t get everything I asked for, I should jump off the cliff with the flag flying – go down in flames. No, if I can get 70 or 80 percent of what it is I’m trying to get … I’ll take that and then continue to try to get the rest in the future.”

Nevertheless, the current political landscape is a reminder that any candidate would do well to heed a what was once said by America’s 30th president, Calvin Coolidge, whose nickname was “Silent Cal.”

Said Coolidge: “You don’t have to explain something you never said.”