Dolly Parton is a Humanitarian Hero

Citiview recognizes Dolly Parton for her humanitarian effort in organizing a clear
and tangible benefit for the families who lost their homes in the Sevier County fires. 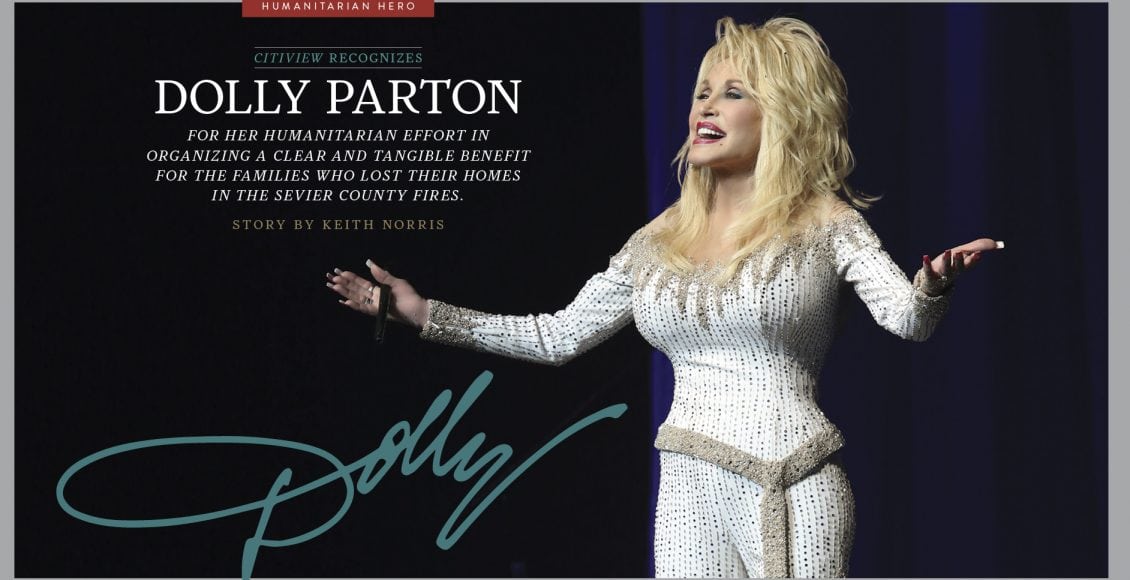 While visiting with a friend the other evening, the conversation turned to one of the few topics you can start a conversation about with ease anywhere in East Tennessee: Dolly Parton. It turns out that in the 90’s, my friend had been working at Dixie Stampede, and Dolly would stop by during and after the show from time to time. The Stampede has a pre-show waiting room of sorts, called the Saloon, and he said she’d sometimes join the staff there at day’s end for a non-alcoholic beverage. He said what most people say about her, that “she is one of the nicest, sweetest people you’ll ever meet.” But he followed that with something that gets to the heart of how Dolly is seen in our community: “That laugh is her laugh,” my friend said. “You find out that is her. When I met her—she is as genuine as it comes.” Dolly Parton is genuine, she’s authentic, and people believe what she says. It’s no wonder she was able to move so many to give so much to those who suffered from the fires.

Although Cityview has never before offered a person-of-the-year award, we feel compelled to recognize an exemplary act of human kindness by a fellow East Tennessean many of us feel we have known all our lives. If you ask around, folks will talk about two sides to Dolly: her ability to entertain and her giving spirit. Both of these qualities have been on display recently.

She just won her 8th Grammy award, for Best Country Duo/Group Performance, a recording of “Jolene” with the acapella group Pentatonix. She was nominated for her first Grammy in the same category for “Just Someone I Used to Know” with Porter Wagoner in 1970, at the height of her collaborations with the country music legend when her career really started taking off.

Of course, that entertainment career has gone on to eclipse singing and songwriting. She is known now as much for her acting career and her Sevier Country entertainment properties, particularly for her signature resort Dollywood. Side by side with her show business activities, she has grown her philanthropic endeavors. She has selflessly raised funds for many charities. Most important, though, is her Imagination Library, which began in 1995 by providing books to Sevier County children, and now mails over one million free books each month to children in the United States and around the world.

Over the course of its 20+ years, Dolly Parton’s Imagination Library has delivered over 80 million books to kids. Dolly credits her father’s habit of sharing with others as inspiration for the program. The story of “Daddy’s dinner bucket” is foundational to the efforts of the Imagination Library. Robert Lee Parton had a green lunch box he carried with him, and each day he would share some portion of what was in it with his children. He was unable to read and write, but he worked hard, and he shared the fruits of his labor. At a certain point, he gave the lunchbox away, but it found its way back to the family as a gift on the Christmas following his passing away in 2000. His name was scrawled onto the box, evidence that he’d learned to write his name.

You can follow a direct line of thought from that original spirit of generosity and literacy in the “Daddy’s dinner bucket” story to the organization at the heart of the Imagination Library: the Dollywood Foundation. The Foundation organized the My People Fund that has so helped the Sevier County community in its moment of need. In order to help out with the tragic results of the fires, Dolly didn’t need to create something from scratch. She simply needed to turn to what she’d spent her career developing as a result of those early lessons from her father.

When Dolly found herself in a unique position to raise millions, she did it by calling on those two parts—her ability to entertain and her ability to give—then went immediately back to work without pausing for praise. 100% of the monies given to the My People Fund went to families in need.

Establishing the My People Fund is absolutely in character for Dolly Parton. According to those she works most closely with, she always puts others first, has always worried about her family and her home, and has said for years that she takes the Smoky Mountains with her wherever she goes.

People associate Dolly with a kind of integrity that makes them want to take part. As Dollywood Foundation President David Dotson puts it, “people wanting to give money whether they’d ever been here or not said, ‘if this is Dolly Parton’s thing then that’s where my money is going because I have total confidence that it is going to be done correctly and with integrity’.”

In early February, Dolly was gracious enough to answer a few of our questions about the fires, her response to the tragedy, and what’s coming next for her.

Norris: What are you working on now? What’s on the horizon for Dolly Parton?

Parton: I am in L.A. working on movies with NBC and Warner Brothers. Me and my partner, Sam Haskell, hope to produce more TV shows. I am always writing songs—that’s my first love.

Norris: What new things can we expect to see in your Sevier County properties?

Parton: In Sevier County, we will continue to expand Dollywood with new shows and rides, as well as more resorts.

Parton: I’m not completely sure, but I have been working on a children’s album and a Christmas album.

Norris: The title song from Pure & Simple almost equates simplicity and spirituality. What’s the relationship
between the two for you?

Parton: It’s a complicated world, but I think God gives us our moral compass to simplify our decisions.

Norris: What is a favorite Smoky
Mountain memory for you?

Parton: All of my childhood was special to me growing up in the Smokies. Probably my favorite was singing on the back porch with all my family. They all love to sing and laugh.

Norris: Why do people love to come to our part of the world?

Parton: Because it is a beautiful backdrop and there are just so many things a family can do to have fun together. Like my childhood and singing with my family, doing things together makes families feel closer.

Norris: What would you want to make certain the world knows about East Tennessee and the Smoky Mountains?

Parton: Right now, it is that we are all okay. The small percentage of the mountains that burned will grow back. The tourist things were not harmed. Things like my Dollywood, Pigeon Forge, The Aquarium, and Ober Gatlinburg are all open and operating. But most importantly, we are taking care of our people and doing whatever we can to help them on their road to recovery.

Norris: When you saw Sevier County and its people threatened by fire, what were your first thoughts?

Parton: My first thought and prayer were that all would be safe. Unfortunately, I guess I didn’t pray hard enough.

Norris: What moved you to create the “My People Fund”?

Parton: The “My People Fund” was created because I knew that those who lost their homes might not have insurance or money to just get by. That is, also, why we implemented the distribution of $1,000 per month before Christmas. Those people had an urgent need!

Norris: The “Smoky Mountains Rise” telethon was a huge success. How do you feel about the effort given by your fellow musicians?

Parton: I will always be grateful for my friends in the industry. The musicians, several companies and individuals jumped right in there with me. They are, also, “My People.”

Norris: As Sevier County rebuilds, what do you look forward to seeing?

Parton: Some of the properties that burned were older. While they are as important to their owners as the newer ones, I look for things that are built back to be even better.

Norris: Whom in your organization would you like to recognize who has gone above and beyond in responding to the fires?

Parton: I would, particularly, like to give credit to David Dotson, President of my Dollywood Foundation, and his staff. They organized the effort of collecting and paying out the money. Of course, my Nashville tour team, Danny Nozell, Kirt Webster, and Steve Summers, jumped in and organized the telethon. All of Dollywood Marketing folks played a big role, also. Pete Owens was a great coordinator.

Norris: Do you have a favorite trail or hike in the Smokies?

Parton: Can you imagine me taking a hike in these high heels? I wouldn’t make it 10 feet!

Norris: Do you have a favorite song to sing while out in the East Tennessee woods?

Parton: Any time I am even close to the mountains, I create a new song. I am at peace when I am there.

Norris: You recently celebrated your 50th wedding anniversary. Do you have any words of advice for a healthy relationship?

Parton: First off, I don’t give advice, but I know mine has lasted this long because I am gone most of the time! Ha!

Parton: I wake up every day dreaming a new dream and I guess I would add it to my bucket list. As I get older, I may focus more time to children. God never let me have kids of my own. I suspect for a reason. Now, all kids are mine.

Norris: We are forever in your debt for making our world more beautiful and our lives rich. What haven’t we asked that you’d like to address?

Parton: I think I would like to just say “thank you” to all the people of the area, who stepped up and helped each other in the area. It was a test of the real character of “My People”—and they passed in flying colors!

Keith Norris is editor of Cityview.