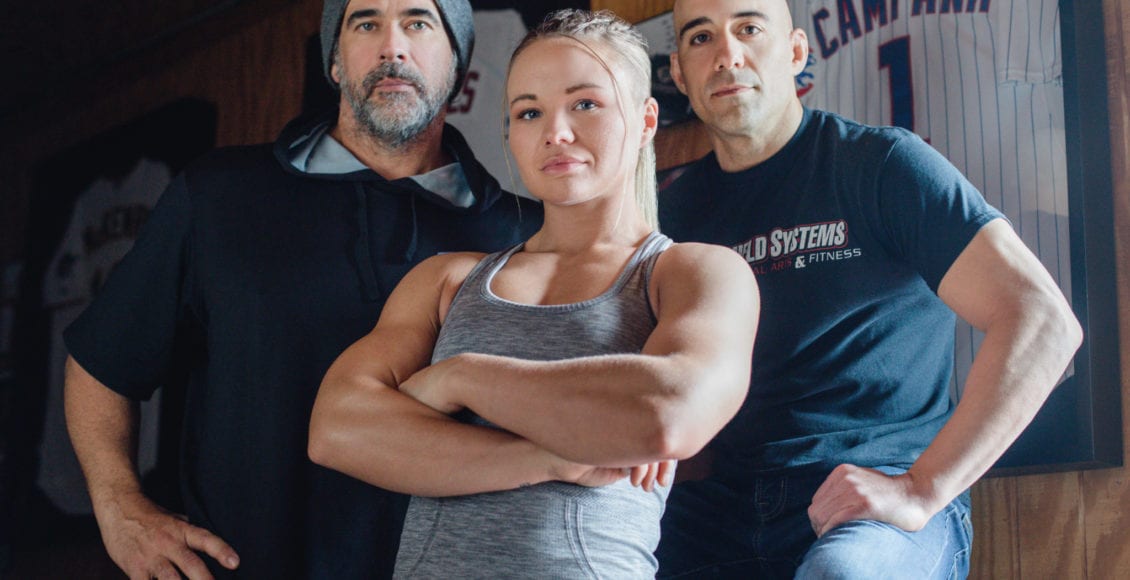 Meet the guys who helped Emily Andzulis prepare for the competition and become the Titan she is today.

Shadow-boxed jerseys, collage frames, and inspirational quotes line the plywood walls of Charlie Petrone’s gym. Accurately dubbed “The Wood Gym,” it has been a training center for many professional and amateur athletes of all ages. The bold and energetic Charlie Petrone doesn’t shy away from teaching and getting hands on with his clients. After all, he has created some of the best. In his 28 years as a trainer, Petrone has worked with world-class athletes in college, the NFL, MLB, and even an international paintball champion. Petrone first met Emily seven years ago through Pure Luxe Salon and Spa. She came to him about a year and a half ago to train for an upcoming MMA fight. To advance her training for The Titan Games, Petrone had her come to the gym twice a day and drilled in on strength, rather than endurance. Because of her small build, they focused on fast twitch muscle fiber exercises and explosive moves. Petrone believed that she had the character to be successful and challenged her with workouts that he gives to professional athletes. He says Emily has the heart of a lion and could outwork anybody.

A large part of martial arts is the mindset. You have to believe in yourself and what you are capable of. Fortunately, Emily’s positive attitude allowed her to fully immerse herself in the world of competitive martial arts. After taekwondo, her next step was to learn the art of jiu-jitsu. Luckily, she had a local expert: Ben Harrison. Owner of Shield Systems Academy in Hardin Valley, Harrison has ten years as a black belt in jiu-jitsu and has worked with Emily on her technique for the past 2-3 years. He says that because she insists on positivity, she is a fierce competitor. Harrison, a former MMA fighter himself, says that growing up he saw a lot of people who couldn’t defend themselves, and he never wanted to be one of those people. He began martial arts in the fourth grade and continued into Brazilian jiu-jitsu. He enjoys teaching at Shields because although everyone comes in with a different goal in mind, he does whatever he can to empower their lives by providing the best learning atmosphere. Shield Systems Academy offers classes in Brazilian jiu-jitsu, boxing, mixed martial art, and other self-defense disciplines.