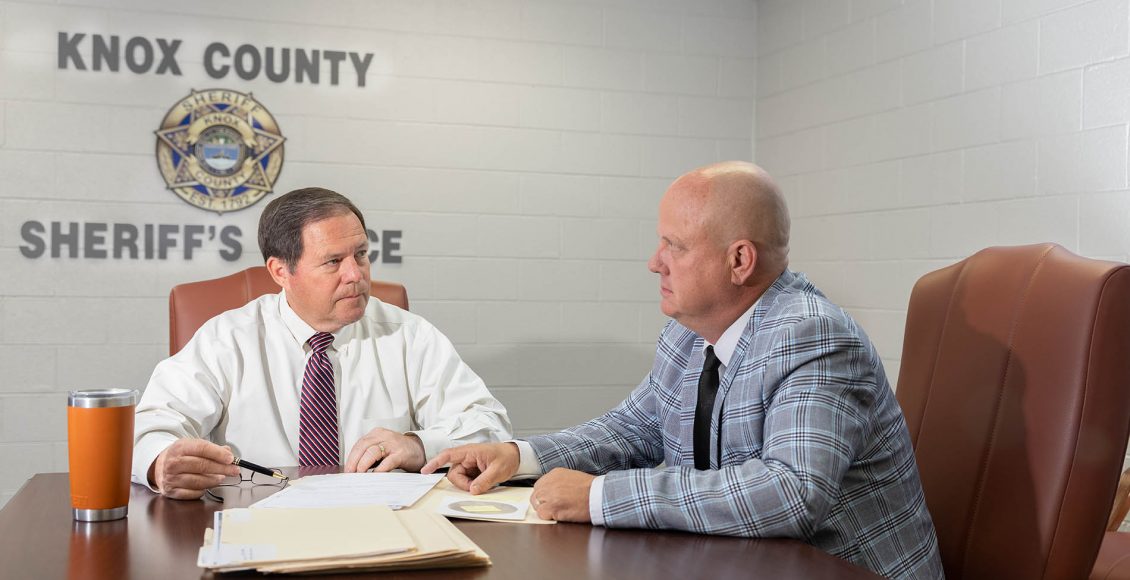 When Cityview publisher Nathan Sparks spoke with his mother recently, she was surprised to hear that everything was OK. Not long before she called, she received a frantic call from someone claiming to be her oldest grandson, and in a well-practiced, rushed manner, designed to make his voice hard to identify while drumming up the urgency and panic on the other end, explained that he had been arrested and jailed in New York. “But please don’t tell my dad,” the caller said. The caller promptly asked for her credit card information so they could post bail.

Her prompt call to her son was a smart choice. He called the number back, asking for more information, including the supposed attorney’s license number. He called the precinct closest to the number the caller gave. “They said, no, they’d never heard of my son,” Nathan says of his conversation with a member of the precinct. “I described what happened, and they suggested that, most likely, it was a scam.”

Sheriff Tom Spangler of the Knox County Sheriff’s Department says that he’s seeing a sharp rise in these types of crimes, in particular, those that target the elderly citizens of Knox County. “Crimes against seniors have always been out there,” he says, “and sadly, we know that much of it goes unreported to law enforcement.” Often, victims don’t want to admit that they’re victims, Spangler adds, “So, I do think that a lot of what’s going on with these fraudulent activities goes unreported. Even when it is, there’s not much that we, or any other law enforcement agency, can do about it. And that’s unfortunate.”

An early 2021 press release by the Federal Trade Commission shares that American consumers reported losing more than $3.3 billion to fraud in 2020, “impostor scams” being the most common type reported. That’s almost double what was reported the prior year. In Tennessee alone, the data shows that the FTC received more than 35,000 fraud reports last year—a fifth of that from the Knoxville metropolitan area—resulting in more than $40.6 million in losses.

While Mrs. Sparks had the smarts to reach out to her son, this scam unfortunately victimizes many people in her age bracket. “Elder financial exploitation”—fraudulent activity perpetrated against senior citizens—is an emotional and financial challenge that Americans are facing at an alarming rate.

In a June 2018 white paper issued by the U.S. Securities and Exchange Commission, author Stephen Deane called elder financial exploitation “a public health crisis, a virtual epidemic.” It’s somewhat prescient that Deane used the word “epidemic” to describe the level at which this fraudulent activity is happening. The COVID-19 pandemic appears to have given rise to fraud of all kinds, the grandparent scam being one of them.

Grandparent scams typically work somewhat identically to what Nathan described. According to the AARP’s Fraud Resource Center, the victim gets a call from someone posing as his or her grandchild, then explains—in a frantic-sounding voice—that he or she is in trouble: there’s been an accident, or an arrest, or a robbery. “To make the impersonation more convincing, he or she will throw in a few family particulars, gleaned from the actual grandchild’s social media activity.” The hook comes in the way of a plea to wire funds immediately with a final request to not tell mom or dad.

So why the elderly? Defined as people 65 years of age or older, the elderly population is growing at an exponential rate. It’s predicted that by 2050, the elderly population in the United States will reach 90 million, outnumbering kids for the first time in history; a very large group of vulnerable individuals over which a scammer can cast a wide net. Unfortunately, senior citizens make easier targets for scammers who can capitalize on a senior’s ability to make quick decisions, especially when feeling pressured. In addition, the wealth of today’s elderly makes them high-dollar targets. According to the U.S. Census Bureau, the median net worth for homeowners age 65 and older in the United States is $201,500. Add on the fact that scammers bank on the isolation in which most elderly live, and this leaves the nation’s seniors in a particularly vulnerable state for scam targeting.

Not all scams target the elderly, however. There’s nothing more nerve-racking for an individual than hearing their power will be shut off. And that’s why utility scams do not discriminate; they target individuals of all ages. And the Knoxville region is no exception. Individuals in our area are actively receiving a robo-call where an animatronic-sounding voice tells them that this is an urgent message claiming to be from the Knoxville Utilities Board informing them that their last monthly payment was not received and that their power is to be shut off sometime later that very day.

The caller goes on to tell you, the target, that “in order to avoid a shutoff and additional fees to return service,” you can “call this number immediately.” According to the Federal Communications Commission, using something called “spoofing,” scammers can even make the phone number they’re calling from look like a legitimate KUB number. Of course, when you call, a human being is there who is, not surprisingly, happy to help you make a payment and bring your account up to date, avoiding the shut off. Be wary. They’re good.

Stephanie Midgett, a communications analyst with the KUB, says they’re too smart to ask for credit card info. “These fraudsters want payment via a pre-paid card. While a credit card can be shut off and payment stopped, once the fraudster has the pre-paid card number, they have your cash,” she says. “They frequently call businesses and are smart enough to call at busy times, knowing that the business owner doesn’t want to risk losing utilities during that time.” Luckily, for some folks, the ask for a pre-paid card gives them pause and a reason to hang up.

Unfortunately, though, many do not. “It varies from day to day,” says Midgett, “but there are days when we’ll receive dozens of complaints about these calls. It’s important for our customers to know that KUB will never make a call like this. If there is ever an issue with a missed payment and the possibility of a service termination, that information is always communicated directly with the customer through their monthly statement. We will not call, text, or email.” While these calls may be reported to KUB, they’re often not reported to law enforcement.

After a year where so many people have had to file for unemployment, the U.S. Department of Justice warns citizens about fake unemployment benefit websites after receiving reports of their existence. Turns out, lots of people are getting calls informing them that they are eligible to receive government benefits, and they sadly end up providing their personal information.

Other government agencies are being used to target individuals as well. Spangler’s mom received one. He describes her experience as “frightening, which is the point, isn’t it?” he says. The call came from the Social Security office, or at least that is what they wanted Mrs. Spangler to believe. She was then told that there was an issue with her account and that by providing the caller with her Social Security number—right then and there, over the phone—everything would be taken care of. “She, of course, shared what had happened with me,” Spangler says. “The best we could do was file a complaint on the FTC website.”

While these scams scare citizens into forfeiting their information to a supposed government agency, other scams look to capitalize on the extra dollars that citizens have received this past year. “The time is right, unfortunately, for fraud,” says T. Scott Jones, partner in the Knoxville-based firm Banks & Jones. “With stimulus money, tax refunds, unemployment payments in hand, individuals can be easy prey for scammers who are selling home improvement services, automobiles, all sorts of things.”

Recently, Jones has seen a scam where fraudsters find individuals who do not have bank accounts. After obtaining their personal information, these scammers then use this information to create accounts for them, all of which, of course, lead to an account other than theirs. “They were defrauded on payments that were being made to them. It was pretty ingenious, and unfortunately, a lot of these scams are.”

In many cases, these scams aren’t done by someone on their free time looking to make a quick buck. “People need to understand and remember this important fact: these fraudsters are professionals,” Jones says. “This is what they do, and they’re extremely good at it. So, consumers must be very, very careful and certainly should never give anyone their personal information.”

Jones goes on to say that, from what he has seen, there is little that can be done, at least in terms of recovery. Once the victim gives a scammer their money, he says, “Well, it’s gone.”

That doesn’t mean that law enforcement and local governments cannot have a role to play. For Bill Bright, Assistant District Attorney with the Knox County Office of the District Attorney General, the best tactic to take in combating fraud is a solid partnership with law enforcement. “We work very closely and very well with local law enforcement,” Bright says. “The kind of fraudulent activity we see, which is often coming into Knox County from out of state, or out of the country, demands a proactive and highly coordinated response.”

The activities to which Bright is referring are centered, by and large, around check and credit card fraud, which he terms “sophisticated operations” perpetrated not just by random individuals, but by “associations” comprised of skilled scammers.

Bright says that credit card information, especially when the purchaser is sliding a magnetic strip card, can be stolen by a variety of methods; so can a checking account number and bank routing number. His suggestions? “Be cognizant of this. Check your bank statements and credit reports regularly, keeping an eye out for potential fraud. Don’t leave your checkbook, or checks that you’re mailing, where they can be stolen. Once the criminals have your credit card or checking account information and the fraud is committed, recovering those funds is virtually impossible.” Which is why Bright’s office focuses on working with law enforcement and catching fraudsters before serious damage can be done.

Spangler agrees. He hits the nail on the proverbial head when he says, “About the only action we can take is to be proactive, since not much can be done once the crime has been committed except report it. Seniors, in particular, need to be made—and kept—aware that these kinds of fraudulent activities are out there and that they need to take the right action. That is, to never give personal information to just anyone, especially if it’s over the phone, they want it right away, and there is no way to confirm their true identity.”

Spangler and his team are working to personally visit the senior living centers in the county in the hopes of educating the residents on this problem and the steps they can take to combat it.

Remember that old saying that if it sounds too good to be true, it probably is? Think about that next time someone tells you you’ve just inherited a million dollars from a long-lost relative in Uzbekistan.