Go and Do Likewise

Generous hearts and courageous minds are vital in today's society. 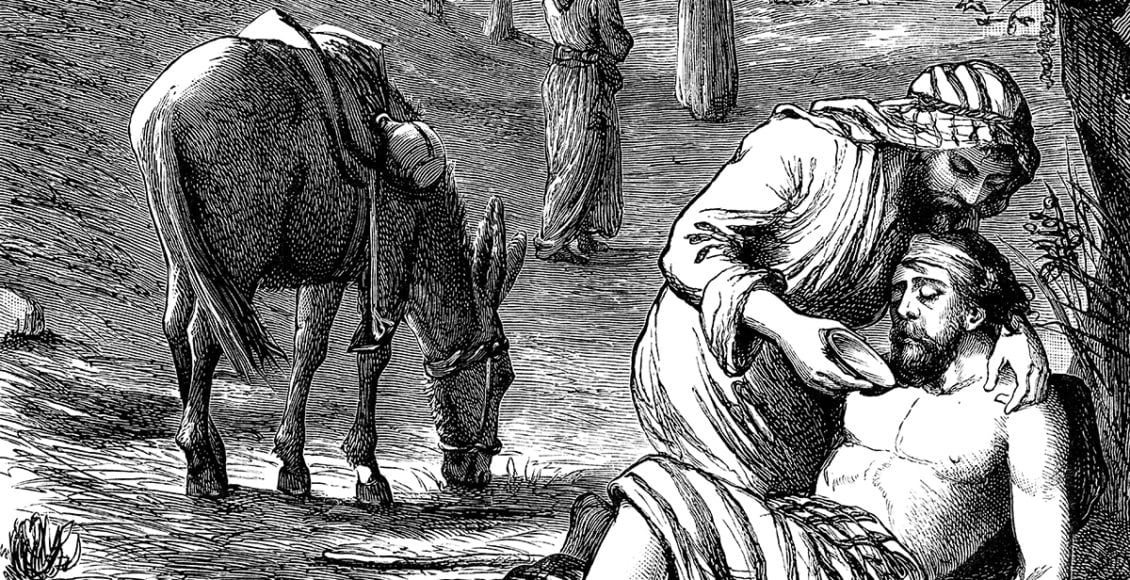 An engraved vintage illustration image of the parable of the Good Samaritan, from a Victorian book dated 1881 that is no longer in copyright
Share

In the Old Testament, the Book of Leviticus teaches not to “seek revenge or bear a grudge against anyone among your people,” but to “love your neighbor as yourself.” This verse prompted an exchange between a lawyer and Jesus that appears in the Gospel of Luke. The lawyer, who is seeking guidance on the path to eternal life, asks Jesus to recite what is written in the law and how it is to be interpreted. In response, Jesus instructs the lawyer not only to love God with all of his strength and mind but, as provided by the verse from Leviticus, to love his neighbor. The lawyer then asks for clarification. “Who is my neighbor?”

In those days, the meandering road from Jerusalem to Jericho was fraught with danger. Robberies accompanied by violence were so commonplace that the path had become known as the “Way of Blood.” Samaria shared a border with Judea. Its people had also descended from Abraham but adhered to a form of religion which accepted only the Pentateuch—Genesis through Deuteronomy—as Scripture. Well before the birth of Jesus, Hebrew prophets had condemned Samaria for its “ivory houses” and pagan riches. This foretold the profound enmity that had developed between the peoples of first century Judea, where Jesus and his disciples lived, and the Samaritans. According to Biblical history, the Samaritans had desecrated a Jewish temple during Passover. In turn, Jews had destroyed a place of worship on Mount Gerizim in Samaria. The parable of the Good Samaritan takes place in this hostile environment.

A man walking along the bloody road was attacked, beaten, and stripped of his clothes. Jesus described the man as half-dead. A priest passed by without any offer of assistance—perhaps fearing danger to himself or indifferent to the plight of the injured man. A Levite, born to the Israelite tribe traditionally charged with the religious and political responsibilities in temple life, declined to offer aid, passing on the other side of the roadway. When, however, the Samaritan came upon the scene, he was “moved with compassion,” treating the fallen man with oil and wine and binding his wounds. He placed the helpless victim on his donkey, took him to an inn, and arranged for his treatment. On the following day, the Samaritan went on his way but left money for the innkeeper, promising to return and pay for the costs of his care.

When Jesus had completed the parable, he asked the lawyer which of the three who had encountered the injured man could be called “his neighbor.” The lawyer provided the obvious answer, “He who showed mercy.” “Go and do likewise,” Jesus responded.

“Lord, give me the opportunity today to do something good for someone…”

This Biblical passage serves as the origin of the Good Samaritan doctrine in the field of law. Generally, this maxim exempts from legal liability any person who attempts to give emergency assistance to the ill and the injured. So long as an individual attempts to aid or rescue a person in peril, he or she will not be held liable for any acts of negligence in the effort. The obvious intent of the doctrine is to encourage individuals to offer help to those in crisis without fear of reprisal. All fifty states have adopted some form of the Good Samaritan doctrine. So has the United States Congress. In 1996, the Federal Emerson Act was enacted to encourage donations of food by adopting protections from liability for the donors of food to the poor and the hungry. Only intentional misconduct or acts of gross negligence by the donor could serve as the basis for legal action. Prior to the passage of the Act, national and regional companies most often disposed of their bulk food surpluses at landfills in order to avoid potential lawsuits from potential recipients stricken ill by eating substandard food.

Tennessee’s version of the Good Samaritan doctrine is by statute. If the service is provided in good faith, “any person,” including all medical personnel and “any member of a volunteer first aid, rescue or emergency squad that provides emergency…services” is, with certain exceptions, protected from liability. Our state has had little litigation on the subject. The single reported case in the last five years confirms that the statute, while offering significant protections against litigation, does not insulate those medical personnel who make “any direct charge for the emergency care.”

Although the University of Tennessee has had a number of outstanding presidents since its inception in 1794, Dr. Andrew David Holt, who served from 1959 through 1970, may have been the most revered. A man of spiritual nature, “Andy” was well known for his folksy charm, his remarkable wit, and his unique ability to illustrate important life lessons through storytelling. During the turbulent sixties, when so many college presidents were under fire, he enjoyed unprecedented popularity. In an interview late in life, Dr. Holt spoke of the influence of his mother as he grew up in Milan, Tennessee. Just as Dr. Holt started each day with a prayer, his mother had done so before him. He explained that her prayer was always the same…and always answered: “Lord, give me the opportunity today to do something good for someone…” This dear lady clearly qualified as a Good Samaritan. Today’s laws are designed to reward rather than risk punishment to those virtuous people, who with generous hearts and courageous minds offer their time and talents in moments of crisis.