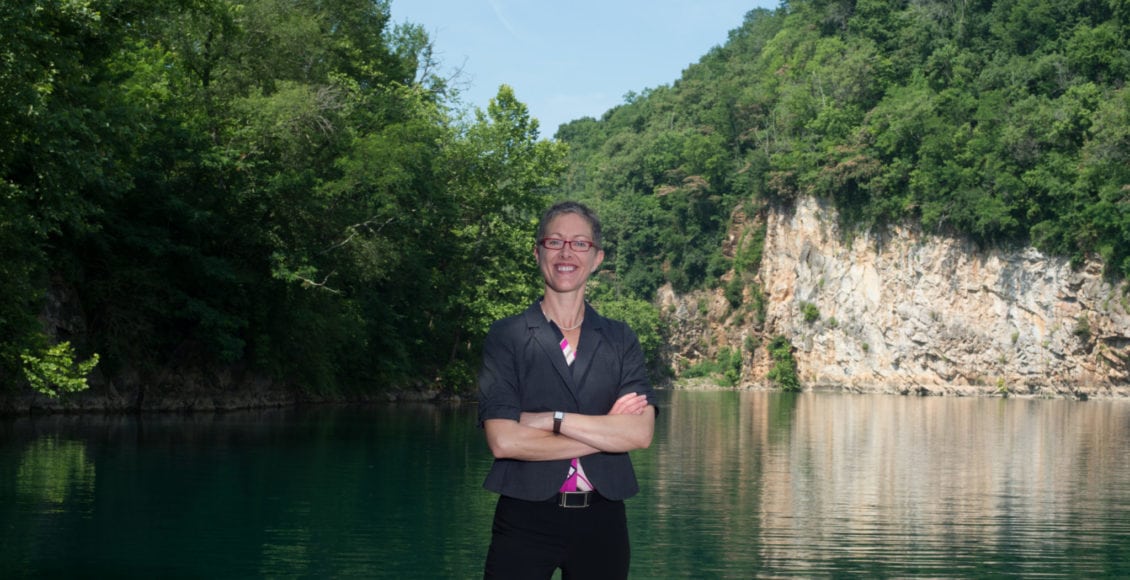 Stephanie Welch believes everything is connected; the evolution of her life and career in Knox County proves it. She grew up in Boscawen, New Hampshire, “a one-stoplight town” in a rural farming community, north of Concord. She came to Knoxville in 1995 to attend graduate school at the University of Tennessee, receiving Masters Degrees in both Nutrition and Public Health.

“It was a life-changing experience. To me, Knoxville was a large city in comparison to my youth. The experience of moving a thousand miles away from home, to a city in the South, the cultural differences…. It was just a really great experience. And then the program I was in at UT was focused on building relationships and building an understanding of how to translate academia into practice; my particular focus was on community. I was allowed to know more and appreciate the importance of community in the overall health and wellbeing of individuals and cities. I decided to stay.”

Stephanie joined the United States Army Reserve in 1999. She had finished graduate school, was intermittently working as an adjunct professor at UT, and had begun her career in public health. “I was so accustomed to being busy: I worked multiple jobs through school; I got two degrees at the same time; I had this really fast-paced life.” She also found that she needed a second job to help pay her student loans. “I got out of school, I was working, it was fulfilling—but I thought, ‘I need more. Some type of adventure’.”

One day, as Stephanie was flipping through the journal of the American Dietetic Association, she saw an advertisement for the U.S. Army and Reserves and began to imagine the military as a possibility in her own life. Her father and stepfather had both served in the U.S. Army. She called a recruiter, not really knowing what to expect. “I went through the process and I ended up getting a direct commission as an officer. All of the people in my family who were in the military were men and they were enlisted, so to be the only woman, the baby of the family, and to be an officer was pretty cool.” She had never envisioned being in the military at all, had never even entertained the possibility of it before:

“I called my dad to tell him about it and he said, ‘You’re doing WHAT??’ Least likely person to be in the military. You can see from my career that I’m social-service oriented. It didn’t occur to me that I could do that in the military. When I thought of ‘military service,’ I thought of combat. Soldiers. Warriors. And that’s the primary mission. That part of service didn’t appeal to me. But the people… it’s the people that have kept me in. I’ve grown as a leader and I’ve had some incredible experiences. You know how businesses have those team-building retreats? That’s the Army, all the time. I’ve never experienced bonds like that in any other part of my life.”

She is now Major Stephanie Welch and she’s been the Executive Officer of the Chattanooga-based 7239th IMSU (Installation Medical Support Unit) for the last seven years. Dietitians are a fixture in every branch of the military and are generally members of medical staff who oversee food and exercise. Some dietitians are based in hospitals and go into combat; some design meals and MREs that are given to both soldiers and refugees; and some are in counseling, like Stephanie. “It’s a lot of life counseling, how to improve health and wellbeing. People are people and they have family issues and other things that are getting in their way of being successful, as a soldier.” She was mobilized for the first time in 2006 for Operations Iraqi Freedom and Enduring Freedom; she was stationed at Fort Campbell, running a nutrition clinic for soldiers who were deploying to and returning from Iraq and Afghanistan:

“It seems like a weird thing for the Army to have to worry about, but the health issues that soldiers face, particularly concerning nutrition…. They gain a ton of weight from stress-eating, either at home or on mobilization and deployment. There are contractor vendors and the food is plentiful. Lots of eating opportunities. On top of that, there are injuries, so then you’ve got this young, active person who is stress-eating and then they get injured and they’re not able to be physically active and there’s weight-gain and high cholesterol and all of the related problems. We’re also there for the families, so we had pregnancies and kids with eating disorders and family members with diabetes… a lot of issues.”

In addition to and sometimes because of an injury, many soldiers experience Post Traumatic Stress Disorder (PTSD). “I have no expertise in addressing PTSD. None. But I saw a lot of it and some of the signs and symptoms of PTSD are discovered through talking about eating behavior. Food is one of those things that people connect over and it has an emotional aspect to it. It has a physical, healing aspect to it as well, especially if there’s an injury involved. My experience was that food was a focal point for conversation; it’s sometimes easier to talk about food than about what’s really going on.”

“If we want people to be healthier then we need to think about not just that person’s individual behavior, but all the things that influence that behavior: access to food and safe places to be physically active and exposure to unhealthy chemicals in communities and poverty… and so much more. As my own career developed, I became really fascinated by cities and communities and leadership decision-making and how all of that has an impact on the individual and their ability to be healthy and successful.”

She applied for special funding (Healthy Kids, Healthy Communities) from the Robert Wood Johnson Foundation. “We were one of just a handful of communities across the country awarded this funding. It allowed me to work in neighborhoods that were facing challenges, working with schools and other community institutions to support kids and families and their health decisions.” Her efforts in community systems and child health were recognized by education advocates; they asked her to become involved in the community schools model, “using the schools as a hub for not only improving student outcomes but improving community outcomes, as well.”

She was subsequently hired by the Great Schools Partnership, a Knox County-based nonprofit education foundation that exists solely to support and improve the county’s public schools, including those in some of the most vulnerable neighborhoods. The foundation helps to create and develop private-sector fundraising partnerships and to establish ways for individuals in the community to become more involved with the schools. She is now President. There are currently 13 community schools in Knox County; in the upcoming 2018-2019 school year, three more schools will join that list:

“The biggest barrier is that our educators are tasked with so many things that it becomes very challenging to add developing partnerships to that. They’re really focused on trying to provide the highest quality curriculum instruction for students and to meet the needs that help support that, so we’re able to provide a staff-person as a resource in that building, to help leverage those partnerships. Once there’s a good relationship between our staff and the principal and the teachers, it works really well. And it’s all an effort to make our schools great.”

Stephanie says over time, the private-funding partnerships mean that donors learn more about the schools and become champions for the students and the students have additional caring adults in their lives. “It makes a difference to them, socially, and our data show that it makes a difference to those kids, academically. On a broader level, it has helped improve the relationships between neighborhoods and their schools and between community leaders and the school system. I love it.”

Deciding to campaign for a seat on the Knoxville City Council wasn’t an easy decision for Stephanie. She knew that representing Knoxville’s 1st District would require an exceptional commitment in an already exceptionally busy life, but she had spent the last 20 years building the relationships that she knew were integral to both a successful campaign and a meaningful tenure on the Council. “I didn’t take it for granted in any way; it was a lot of work. But to have had the opportunity over 20 years to work in all of the different ways across the community that I did was a huge help. It prepared me to campaign but it also gave me a better perspective on serving in office. It felt like the right thing to do. This community has invested a lot in me and I felt like it was time to give back.”

Stephanie won a seat, began serving in December, 2107, and says it’s an exciting time to be on the Council. She’s among five of the newest council members, four of whom are women, and she’s found it notable that it’s such a highly functioning government body. “Good relationships. We don’t always agree, but there’s a lot of respect; people’s hearts are in the right place and they have the experience to put that into action.” Stephanie finds many similarities in the work she does in the Army Reserves and the work she oversees in communities and schools, noting that in all of these settings, there is support to be found, but it’s often difficult to make sure people have access to that support, or even know that it exists in the first place. “The ultimate goal is for the soldiers to be ready for the mission. We want kids to graduate from high school. There are lots of other things that have to happen in order for those things to happen, and much of that is on a personal level, a social side, the context of this person’s life. We need to find ways for more people to have that connection and that pathway.”