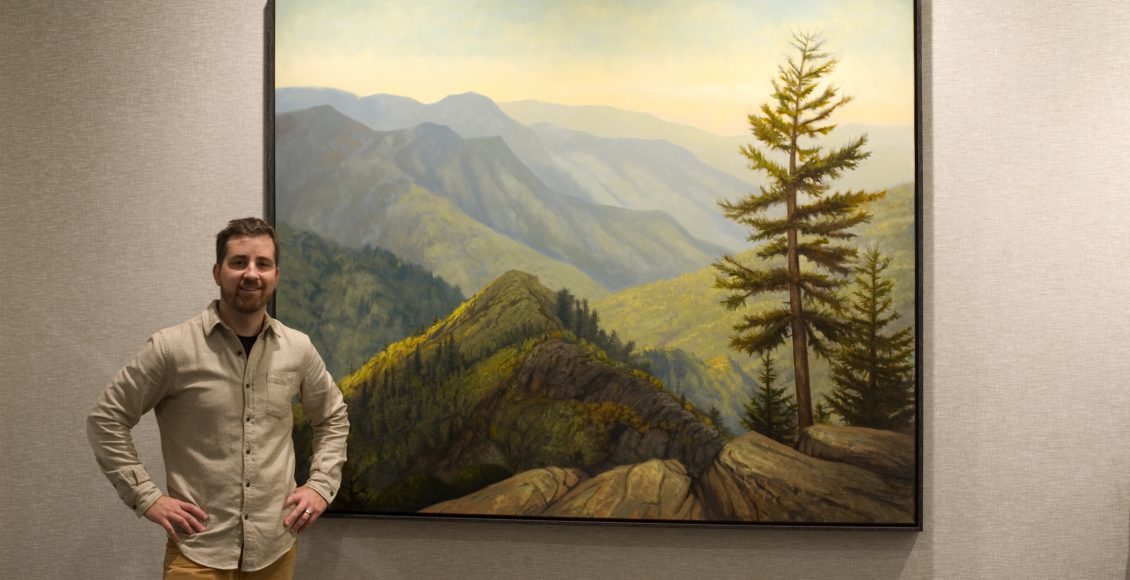 Art has always been a big part of Jonathan Howe’s life. His passion first manifested itself in drawings and sketches when he was a boy growing up in Maryville, and, by the time he entered high school, he knew he wanted to seriously pursue it. As a homeschooled student, Howe had to search harder than some to find art instruction to help him grow in his abilities, but he eventually made his way to an art class at Maryville College, where he went on to earn his art degree. A year and a half after graduation, in 2007, Howe decided to launch full-time into art as a career.

In the beginning, Howe primarily painted portraits by commission, but he soon branched out into landscapes, working primarily in oils on canvas. His work has evolved through his commitment to developing his own style and through his continued study of other artists, such as Edgar Payne and Scott Christenson, from whom he draws inspiration. “There’s a combination of doing this purely for myself because I enjoy it, but I’m also thinking, ‘Is someone going to want to put this in their home and enjoy it for a long time?’”

Howe’s work is heavily influenced by his Appalachian locale. “I think we live in one of the most beautiful places in the country,” he says. The Smoky Mountains are his biggest inspiration. He grew up backpacking, camping, and hiking the trails in the Smokies and continues to visit the mountains where he does plein air painting.

“I see the art community growing quite a bit in Knoxville,” Howe says. “My desire as an artist here in Knoxville is to get to a point where my work is more nationally known. I want to help shine a light on the area and how beautiful it is.”

He says most of his sales have been in the Knoxville area, and he counts himself blessed to be a full-time artist sustained by the local community. He hopes to see a growing appreciation for art in Knoxville.

Howe continues to paint portraits—his most recent commission was for the University of Memphis Law School—but most of his traveling shows at galleries are landscapes. Locally, you can view his work in his studio by appointment, or on his website JonathanHoweFineArt.com.

Born and raised in rural East Tennessee, Rachel has a passion for shining a spotlight on the literary work of her fellow Appalachian writers. When not working on her own Appalachian Lit novel, she enjoys reading (everything), attending literary events, eating street tacos, and managing the three ring circus that is her family of eight.