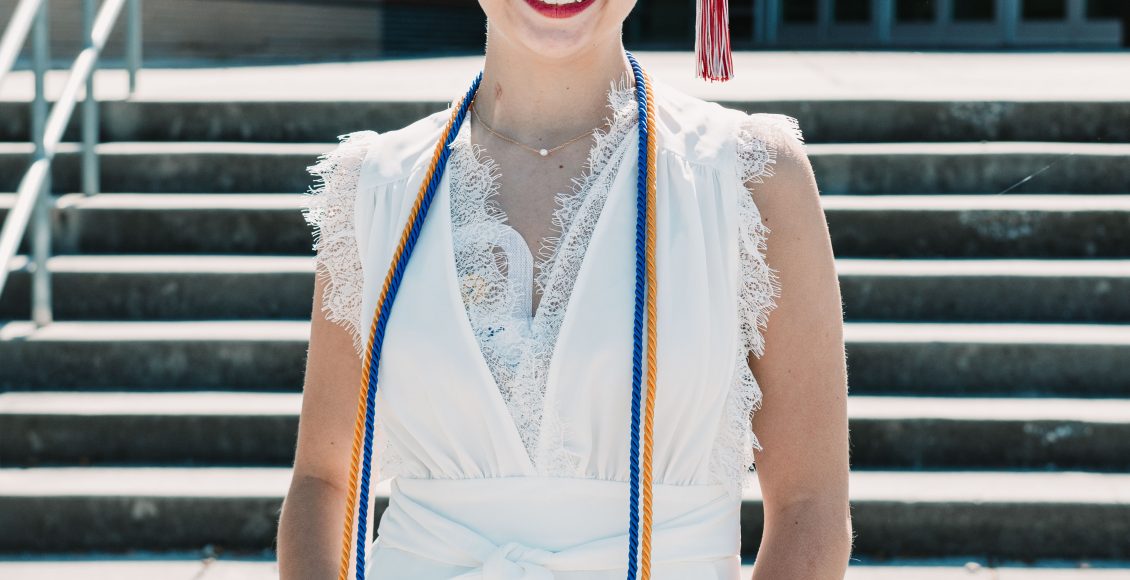 This past April, while many were settling in to COVID-19 quarantine, Josie Fellers was practicing for one of her biggest performances yet: auditions for the University of Tennessee Dance Team.

A senior at Oak Ridge High School and dancer at Oak Ridge Academy for Dance, Josie was accepted into UT’s School of Communications and had completed the second round of virtual tryouts for the dance team. She pushed harder than ever to prepare for this milestone, but something about how she was feeling seemed off. “We noticed she was getting more tired than normal,” says John Fellers, Josie’s father, and as she prepared for her third audition, it only seemed to get worse.

After undergoing tests—and extra blood work pushed for by Josie’s mom, Shellie, a registered nurse—Josie and her family had an answer to what was making her unwell. Josie had leukemia. “You can imagine as parents, you’re just shocked, in a daze. Is this real?” John recalls.

For the next five months, Josie would spend the majority of her time at East Tennessee Children’s Hospital (ETCH) being cared for by the hospital’s unique makeup of doctors, nurses, administrators and volunteers. “Children’s Hospital cares about your children like they were their own…,” John says. “It’s been an experience for sure, but they have made it much more bearable and easier to get through.”

Only Kids, All the Time

Josie’s introduction to ETCH actually started 18 years ago. Born with underdeveloped lungs, Josie was rushed to ETCH where she spent the first 10 days of her life. Little did her family know they would be back 18 years later, watching their teenager battle cancer. But that is what the children’s hospital is tasked with, to be there for children from birth to early adulthood improving their health, caring for them during unimaginable journeys, and leading them on pathways to wellness.

“Children aren’t little adults,” says Matthew Schaefer, ETCH’s new president and CEO who took the helm in August. “What we have the opportunity to do here is be about kids, all kids and only kids, all the time.”

The pediatric hospital has a 152-bed campus on Clinch Avenue in Knoxville, which includes an ER and access to a host of pediatric subspecialties, including hematology and oncology. No fewer than 5,500 children are admitted to the hospital in a single year. The campus is joined by two urgent care locations in Knoxville and another two on the way in Sevierville.

Becca Trout, nurse manager in the Hematology and Oncology Clinic, says it’s unusual for a children’s hospital to not be associated with the larger health system, but for ETCH, it’s opportune. “It gives us the ability to make governing decisions that are best for the kids specifically, not necessarily for the larger health system,” she says. “For families, it means they’re getting the most well-supported currently recommended treatment plans…People are just relieved to know that they can get cutting edge treatment close to home.”

Trout’s mention of relief for families is one that’s found often when speaking with someone about ETCH. “When children walk through our door, roughly 150 a day, 40 a day through our operative environment, we are not experts on those children,” Schaefer says. “Moms and dads, caregivers, whomever is the guardian of that child, they are the experts on that child, and they have entrusted the care of their most precious thing to us.”

And the families notice that emphasis. “People may not realize the amount of support that’s given in so many different ways,” says Karisa Bitner of Lenoir City, whose daughter Lilly, diagnosed with leukemia at the age of 5, spent nearly two-and-a-half years in and out of ETCH undergoing treatment. “It’s not just medical. It’s mental, it’s physical, it’s even spiritual if you need it. It’s things on a very basic level.”

ETCH became the family’s only other safe space when Lilly was at her sickest. Now two years out of treatment, Lilly is visiting just a few times a year and doing telemedicine where she can. Bitner says she feels blessed they chose to move close to a hospital that could handle oncology when they did, just nine months prior to Lilly’s diagnosis. And today they have a family of supporters as a result. “They hold a special place in my heart.”

John Fellers echoes the sentiment. “From day one there, we were just overwhelmed with how many people, volunteer services, and social workers wanted to stop and visit with us to make sure we had everything we needed.”

The Fellers received a care package when they first arrived containing gift cards to local restaurants, laundry detergent to use on-site, a roll of quarters for the vending machines, and so much more. And it meant the world to them. “From the first hours and days we had people coming in and checking on us, and it was wonderful.”

This year has been nothing short of challenging for so many across the world, but for the team at ETCH, they took the challenge in stride. “There were so many things that had to change in a very short period of time,” says Dr. Joe Childs, ETCH’s chief medical officer. Based on what they were seeing in other countries, COVID-19 was not proving to be devastating for children, “However, it posed risks for parents and healthcare workers,” Childs says. “The prioritization was wanting to keep the environment safe for the patients we’re taking care of, but we also needed to protect all of our staff so we could continue to perform the mission of the hospital.”

From the availability of testing and personal protective equipment to visitation protocols and screening at entrances, the team at ETCH went through it all. “While the disease itself has not brought us a lot of sick patients, it’s made it challenging for us to transition how we can perform our essential mission,” Childs says. “It has changed a lot of things that we do here, but I think some of those changes will lead to improvements long term.”

Telemedicine is one. Prior to the pandemic, the hospital had done a total of 150 telemedicine visits, but as of late September, that number was 11,000. It was a necessary thing for the hospital to do when things were unknown during the pandemic, but in many cases, doctors are finding it effective. “We’ve learned new ways to prevent the spread, both as communities and health care facilities,” Childs says, adding that as we approach flu season and a time when they see a rise in RSV, it will come in even more handy.

Add an increased emphasis on mask wearing and hand hygiene, and the team is working around the clock to ensure children and families feel supported during their personal challenging time and the world’s. “Challenges are a way to rise up and find other ways to succeed,” Schaefer says. “That’s the way the hospital looks at the pandemic, and I believe it’s what will drive us forward.”

Like many organizations, ETCH did see some changes in how they raised their funds this year. The pandemic forced a shut down of elective procedures at one point this year, but Schaefer says they have been able to weather the storm. The hospital team had to cancel multiple large events this year, some moving to virtual platforms, including their annual Golf Adventure event, Radiothon, and the upcoming Fantasy of Trees. But Schaefer says they are still seeing the support for these events.

Yet while so much has changed and created challenges for East Tennessee Children’s Hospital this year, the generosity of the community is not one; they’ve continued to see support from donors. And volunteers continue to remain engaged in the work, just as they always have. “We always want more people involved here,”Schaefer says. “Part of our service is not just to patients, part is inviting others in who want to be here and be involved in something bigger than themselves.”

East Tennessee Children’s Hospital seems to be a home away from home for the patients who are there. The medical services and treatments are a driving force, of course. But the people bring it home. The physician who chose Children’s Hospital as his or her place of practice amongst children’s hospitals far and wide. The music therapist who uses the joy of music to lighten the challenging load young patients carry. The new CEO who takes time to check in with families. The nurse who organizes special celebrations for a child when a birthday comes and they’re stuck in a hospital bed. The people are what drive the impact.

Josie closed out an important chapter in her journey with ETCH this year, with her nurse by her side. After four rounds of chemotherapy with recovery phases in between, Josie’s final chemo treatment was August 26, her 18th birthday. And while she will make routine trips to the outpatient clinic at ETCH to monitor her blood counts, Josie is ready for the next chapter, eagerly anticipating UT’s Dance Team tryouts in the spring. And her family is simply grateful for the care and support she received, which, coupled with her strength and positive attitude, helped get her to this point.

To learn more about East Tennessee Children’s Hospital and how you can get involved, visit www.etch.com.