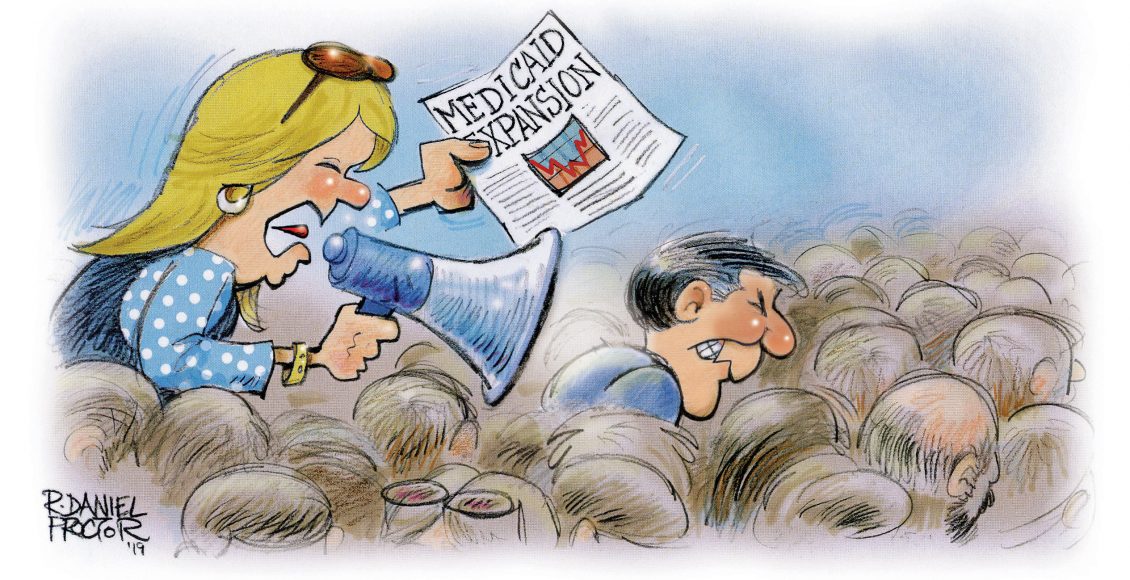 It’s liable to get noisy in Nashville. Gloria Johnson has three options as she returns to Nashville to represent the 13th District in the state House of Representatives: 1) Be quiet and build a bit of seniority and some relationships; 2) Pick several issues on which she can compromise and work with the Republican majority to try to pass legislation; 3) Become a human bullhorn for the purpose of trying to embarrass Republicans. In Vegas, No. 3 would be a good bet. The other two are long shots.

The 2018 elections saw the Republican House majority grow to 73 seats to the Democrats’ 26. In the state Senate, Democrats hold five of 33 seats: two of the Democratic senators are from Nashville, three are from Memphis. They could hold caucus meetings in a minivan—with room remaining.

From a century of state political dominance, Tennessee Democrats in the last 24 years—beginning with President Bill Clinton’s first mid-term—have flamed out spectacularly. As the national party has steered a hard-left course, an increasingly leaky Tennessee Democratic ship has seen itself largely abandoned by Tennessee voters.

Republican State Rep. Eddie Smith, who’d held the District 13 seat for four years, defeated Johnson in 2014 after her first two-year term. Smith won a narrow re-election victory in 2016, but suffered a more than 10-point drubbing by Johnson in 2018. Smith, a well-regarded legislator, fell more than 2,000 votes short of his 2016 total. It speaks to a lack of enthusiasm among District 13 Republican voters and a motivated Johnson organization.

In the Democratic wasteland that is the Tennessee General Assembly, a vacuum exists. Johnson, not exactly a freshman given her previous experience, conceivably could fill that vacuum. No one else is doing so.

Education is a big deal in individual and state economic success, but education isn’t that big a deal in statewide politics. Really. Though every candidate for office genuflects at the altar of supporting education, they also know that taxpayers generally prefer not to see their taxes raised. Thus, they try to walk a line between the two. Besides, if someone likes their child’s school and their child’s teachers, they don’t have a problem with education.

Johnson’s other Big Issue is healthcare, as in expanding Medicaid. The argument is that it’ll provide healthcare to 280,000 Tennesseans and it won’t cost the state any money because the federal government is picking up the tab.

That’s the club with which Johnson can batter her Republican counterparts, claiming throughout the state that the GOP grinches with hearts three sizes too small are denying children —children!—healthcare. Polls show Tennesseans want expanded Medicaid! Only the cruel would turn this down!

Johnson could use this platform to encourage the disaffected to vote for Democrats and to shame Republicans into doing something about Medicaid, even if just to gag her. It’s a pulpit from which she would likely find sympathetic hearers among many in the news media.

However, if expanding Medicaid were that effective and attractive it would have ridden to passage in its own limo. Republican Gov. Bill Haslam’s Insure Tennessee went down a flaming wreck despite the GOP’s legislative supermajority.

Across the country, states are finding that when federal payments reduce to 90 percent, the 10 percent that must be picked up is sending some of them to the financial emergency room.

As Governing magazine reported in July 2018, “Many are tapping into tax revenues, making hospitals help, or adding work requirements and premiums to account for their increasing share of the expansion bill.”

Kentucky is eyeing a nearly $300 million shortfall in its expanded Medicaid program and is thinking about scrapping it altogether.

Nevertheless, if Johnson wants to demagogue the issue—a not unheard-of practice in politics—she can. The betting here is that she will.

Johnson is a Democrat in Tennessee. As Bob Dylan so eloquently put it: “When you ain’t got nothin’, you got nothin’ to lose.”