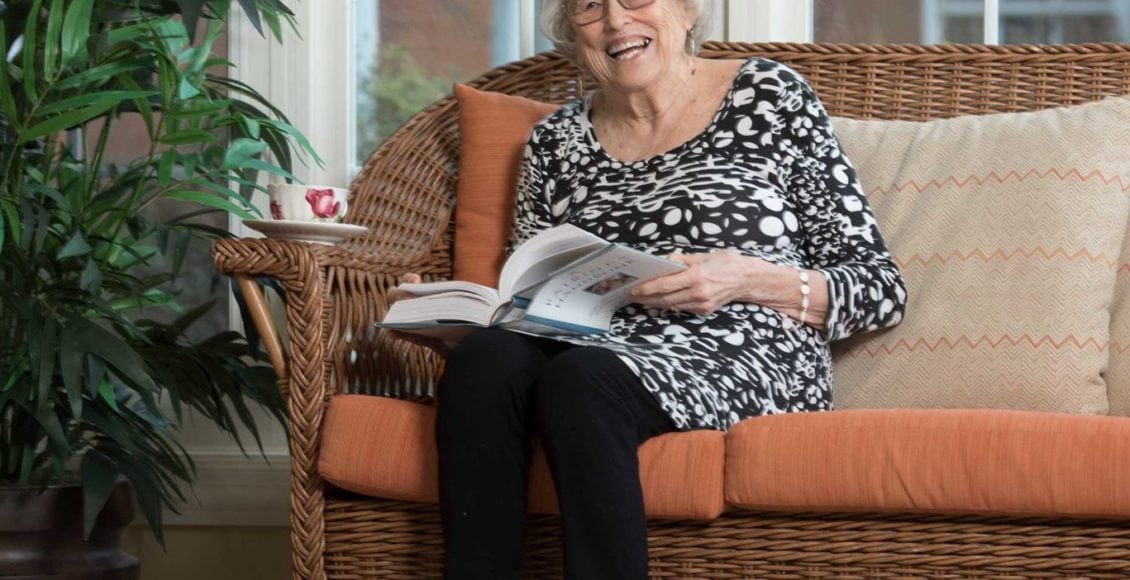 “Do you believe there are angels, people who are put into our path at the very moment we need them?”

Neysa Peterson looks up at me with sparkling eyes, smiles, and nods. She replies, “Oh, yes. I felt that, too, when I met you.” It was the last question I asked Neysa during our interview. She generously shares her story while listening intently to yours.

The 82-year-old assisted living resident draws upon her experience in the art and science of caregiving she learned as an RN, healthcare administrator, family therapist, Hospice program coordinator, and co-author of a book on compassion. Her gifts are fully realized in the environment at NHC Farragut. There is flexibility in meeting needs and an openness to improvement through the Residents Council she helped initiate. Her experience has culminated at the facility, where she continues to make a difference as an advocate, finding ways to bring more joy to the daily lives of those in assisted living.

69% of caregivers for patients of dementia pass away before the patient. But Neysa has outlived the statistics and survived her husband’s battle with dementia. When she later had a spinal stroke, she prevailed upon doubtful doctors that surgery was beneficial for a 76-year-old woman. When assisted living regulations initially excluded her based upon certain guidelines, she persisted and reapplied. This is her third assisted living facility in Knoxville, and was accepted as an individual who was anything but average.

Neysa was in nursing school in Chicago when she met her husband Jim, who was at Great Lakes Naval Training Center. They had what she describes as the “temporary insanity of infatuation.” They took time apart to pray and think about their future—whether she would follow her calling as a nurse in the mission field or follow her heart with a husband and dovetail her career with his. That path led them to the University of Vermont, where he became head of the new counseling education department. Neysa got her master’s in counseling so they could share their vocation, counseling couples as a team and establishing a family education center.

After Jim retired, they were driving with out-of-town guests. He asked Neysa, “Is this where we turn?” His sister-in-law said, “All these years here and you don’t know where to turn?” It was the first warning bell. Neysa produces a photo of Jim with one of their daughters. “You can sort of see it in his eyes in the picture.” Tests confirmed he had early onset dementia. Their commitment and shared background in counseling allowed them to pass an ultimate test of love.

Neysa became the voice in the wilderness for her husband through his nine years of dementia. “Dementia is so misunderstood. They’re not slowly dying; they are having difficulty relating.” She describes it as being in a foreign country where others don’t understand your language or customs. One day, as the snow covered their neighborhood and the empty street, he looked to her and asked, “Where are the livers?” She thought about “livers,” and realized that he was speaking of neighbors he would normally see driving down the street where they “lived.” She found that there are ways to communicate with loved ones who are living in this strange land of dementia.

“When I started that journey with my husband, I thought my background in nursing would help me. But it was my counseling experience that made the difference.” He seemed to remember their daughters, but when one of them was visiting, he told her, “Don’t eat here. The food’s terrible.” Neysa started taking him out to lunch. Once as they were returning from an outing, he refused to leave with her. He said he had to wait for “the man” who was the driver. She produced her car keys, and he was satisfied that she was “the man.”

Once, when he wandered outside, she thought about triggering the alert bracelet to find him. Instead, she found him resting in a neighbor’s yard and asked, “You want to go for a McDonald’s hamburger?” When they visited Florida as Vermont snowbirds, he would go walking, as if looking for home. She followed in the golf cart, offered him a ride, and asked him to tell her about his home. “He never identified the place where we lived for 40 years as his home.” When he returned to his birthplace in South Dakota, the “home” he knew in his mind had since changed. He said his home was gone.

“I am sure that on some level he did remember me. I could tell when I would lie down with him that he wanted to hold hands.” When he became lucid again, two weeks before he passed, he said, “You’ve been a wonderful wife. Thank you for what you’ve done all these years.” He did remember her and their love. “He appreciated me even when he couldn’t tell me.” She adds, “Your spouse is still your spouse.” Even when they are lost and you become the caregiver.

She recalls the health crisis that led her to be at NHC. “I was lying down watching TV when I had this sensation like a belt tightening. “I thought I’d better call the Emergency Department.” She called and lay back down to wait. By the time help arrived, she was paralyzed from the chest down. Initially, it was misdiagnosed as her heart. A CT scan revealed the bleed, a stroke of the spinal cord.

“My kids, in essence, rescued me.” Her daughter told surgeons, “If you’re questioning the benefit of the surgery, you don’t know my mom. Try it.” They debulked the hemorrhage to remove the clot and relieve pressure on the spine. She woke up wiggling her toes. “After I woke up paralyzed, I thought, ‘Well, this is interesting’.” But she wasn’t afraid. “Fear is destructive, anxiety takes your energy, and worry gets in the way of trusting the Lord.”

Recently, she was contacted by the hospice program that she helped initiate in Vermont as they celebrate their founders and pioneers. Some of her volunteers have had 25-year-tenures, while others make it less than a year on average. That alone speaks volumes about the rewards of working with hospice care. She describes her years with hospice as strengthening and gratifying. It is about forming a relationship with a person and families on a profound level, being entrusted with a sacred moment, and witnessing the mysteries and miracles of the human spirit.

She speaks of the wonders we may not understand: a loved one speaking to someone you can’t see, the person waiting to pass away until they’re alone to avoid hurting you, the unexplained presence of a lost loved one through an angelic or personal symbol, such as the mysterious appearance of a beautiful bird. “My husband Jim loved to play golf.” She was surprised to find a stray golf ball lying at the base of his monument.

“You learn how thin the line is between here and there.” She has seen that thin line personally, although she doesn’t recall it. Her daughter recently told her that when she was waking up from surgery, she said, “They sent me back. My time wasn’t done yet, that I had more to do.”

Through these past years, she says, “I have grown, learning what’s important, and I have more awareness of blessings.” It’s the same advice she’s given to residents. “I hear their problems, then help them recognize their blessings. She encourages people to pursue the things they still want to do. For Neysa, it’s going back to Vermont one more time.

When your life changes, look around you. People may appear in your path who will be sign posts to point you in the right direction or to calm you by listening and understanding. They may be family or strangers, your caregivers and nurses, or a resident in assisted living.

There are angels among us and within us. Neysa has been that person, aware and compassionate, drawing people to her who have lost their way, including myself.

The morning that I was preparing to meet Neysa to learn about aging and caregiving options, my husband suffered a severe injury outside of our home. We sat on the stairs waiting in agony and disbelief. I called Neysa to reschedule. Her voice on the phone calmed and strengthened me so that I could do the same for my husband.

When I met her, she handed me a booklet, Five Wishes, which is a resource for people planning future care in the event of a health crisis. Neysa taught workshops on the Five Wishes. The night before surgery, my husband broaches that scary topic no one wants to discuss. I reach into my notebook and pull out the “Five Wishes”. Other friends have since requested it in these few days. Neysa suggests she could hold another workshop.

After our interview, I left enlightened, returning to my husband at the hospital. A beautiful white feather appeared in my path. I picked it up and recite the saying, “When a feather appears, angels are near.” It reminded me of the conversation with Neysa.

My husband has since become Neysa’s new neighbor at NHC Farragut in the rehabilitation facility next door. Neysa says she isn’t clear on the message of what more she had to do, why she was sent back. But it seems clear to those whom she has met along the path of assisted living.