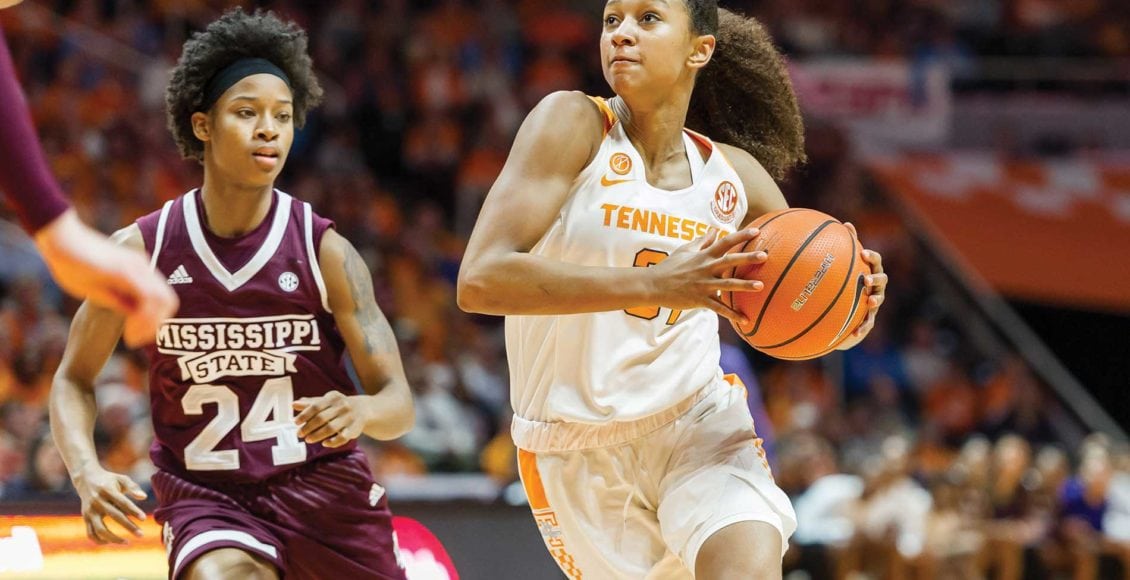 Photography in gallery below by Hobe Brunson.

Bubbles can be slippery.

The University of Tennessee men’s basketball team found out just how treacherous the footing can be last season. An NCAA Tournament “bubble” team by midseason, the Vols slid all the way out of the 64-team field – and any postseason action, for that matter – thanks to a late collapse.

This year, with the postseason close enough that the Vols can taste it, the Tennessee men are projected as a solid participant, anywhere between a No. 3 and No. 5 seed by the “experts” who make a living doing that sort of prognostication.

The Lady Vols are in a completely different situation. Fifteen straight wins to start the season sealed Tennessee’s spot in the NCAA Tournament.

The magic number for the Lady Vols now is 16. What they have to do is locate themselves among the country’s top 16 seeds to earn a host role for the first two rounds of the competition. The NCAA will likely be cheering for UT to reach that level, since tournament attendance in Knoxville is usually among the best in the country.

Unlike the men’s tournament, the women’s NCAA Tournament should really have just 32 teams. The competition level drops off significantly in the second half of the field. There aren’t many upsets in that first round of play, but Title IX will keep the size of the fields equal.

All season, Tennessee men’s coach Rick Barnes has been fixated on his team’s lack of maturity. For good reason. The Vols have just one senior on their roster (James Daniel III, a guard who comes off the bench) and have eight who are in their first or second year in the program.

That’s why Barnes has been adamant about making sure his young guys develop good habits and commit them to memory. That’s the quickest way toward the consistency for which he’s searching.

“Effort is a choice. …The things you can control: Your mental focus; your physical focus,” Barnes says. “The details are so important. That’s a choice. That’s the kind of consistency we’re talking about.

“You develop that through day-to-day winning habits. It’s hard. It’s really hard. That’s why there are so many teams that aren’t consistent. It’s really hard to play this game the right way every time, at the level that coaches always want guys to play.

“It has to be a mindset. There are certain things you have to fight through that are non-negotiable. Hard work is a talent. It’s not a given. People watch the game and think everybody works hard. I don’t think that’s true. It’s something you have to work at to get that consistency mentally and physically. That’s where we need to improve as much as anybody.”

The Vols have found a leader in 6-foot-7 sophomore forward Grant Williams. The versatile big man, who has a soft touch inside, has bought into Barnes’ vision.

What makes it work is that there are so many interchangeable pieces. Tennessee routinely goes eight deep with double-digit minutes played. That depth is what Barnes hopes will avoid the slide (3-6 to end the regular season; the Vols finished 16-16) that brought an early end to last year.

“You hope they know [how to avoid a collapse like last year],” Barnes said. “We’ve got some guys who have been through it. We’ve learned. We can grow from it. We hope they realize that this is the [time] when things get separated.”

After starting with that long win streak, the Lady Vols stumbled through a stretch in which they lost four of six games. Three of those setbacks were to ranked teams: Mississippi State, Texas A&M and Notre Dame. The fourth was hard to explain, a bitter disappointment against a very mediocre LSU.

Those bumps in the road fueled criticism of head coach Holly Warlick. Six years into her run at the Tennessee helm, Warlick is still trying to coach her way out of the massive shadow cast by Lady Vols icon Pat Summitt.

On Feb. 1, the Tennessee women stopped the bleeding and set up a stretch drive to the postseason by getting a measure of revenge on Texas A&M with a 15-point win over the Aggies. Afterward, A&M coach Gary Blair, one of the game’s elder statesmen, implored the Knoxville media to give Warlick a break.

“People get a little chirpy,” she said. “I’ve been doing this a long time. I love what I do. There are going to be games where people think I don’t know what’s going on. I don’t want to get used to [the criticism], but it motivates me a little bit.

The Lady Vols’ star-studded freshmen – Evina Westbrook, Rennia Davis and Anastasia Hayes – have been good, but when it comes to crunch time, seniors Mercedes Russell (6-foot-6 post) and Jaime Nared (6-2 wing) are the go-to players.

This season, Tennessee is on solid ground and looking forward to a special ride come March.