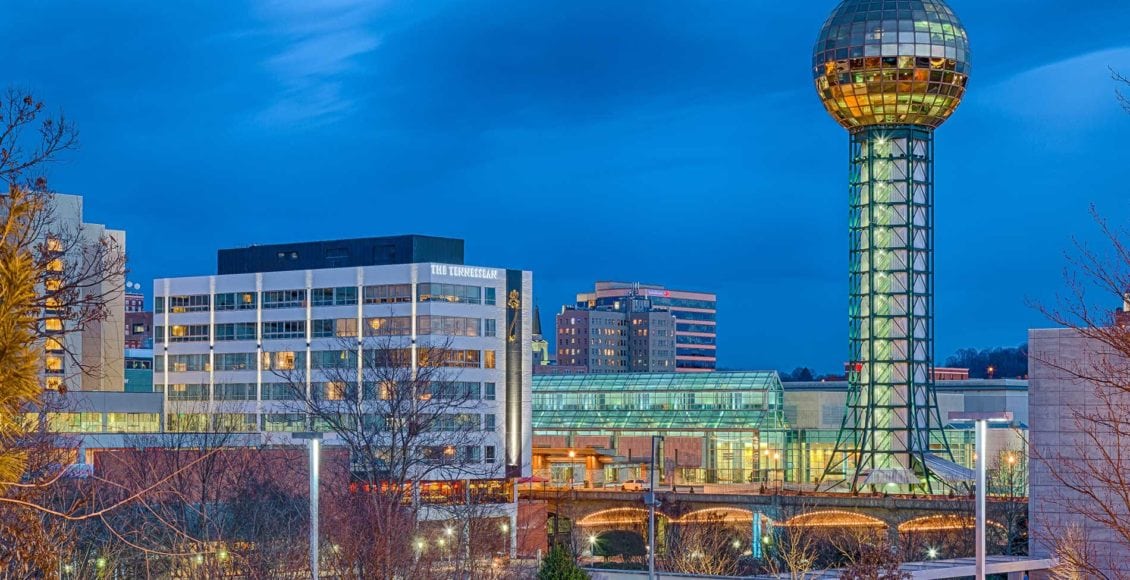 Nearly 29 years ago,  when I arrived in Knoxville in pursuit of a graduate degree, there was a certain celebrated, gritty quality about downtown.

A wig shop sometimes seemed the only thing open on a boarded-up Gay Street, and the Old City was barely hanging on, with a couple of anchor restaurants, a costume shop, and a series of come-and-go eateries, bakeries, and clubs (where you could see very good music). Now, though, downtown Knoxville has become a destination, both for those visiting East Tennessee and for those of us who live around here. As a long-time local, I decided to give a weekend downtown a try, parking my car and going it on foot until I left on Sunday. As I walked, I was both whisked to the past and stunned by the present—and in love with the city all over again.

At 5:30 on a chill Friday in mid January, I arrived at The Tennessean, a “personal luxury hotel” located on Henley St, right next to the Knoxville Convention Center and Sunsphere. I was a little worried about how I’d come across to the staff. I’ve been a student, a teacher, a bartender, a writer, an editor, a photographer—I’m not a luxury guy by any means. My idea of dressing up is to tuck in my shirt.

But my fears were for naught. The folks at The Tennessean make it clear that the luxury is their responsibility. It is a fantastic place to stay and a great staging point for visiting the finest Knoxville’s downtown has to offer. If you stay there, and you should, lose no time hiding in your room, though it will be comfortable beyond expectation—with rugs evoking the Tennessee river and, above the headboard, historical topographic maps of the river as it winds its way through the city. The Drawing Room, something between a bar and a lounge, is an elegant yet comfortable place. It is worth spending an hour of your downtown time there. Don’t miss their Smoked Old-Fashioned, a drink with just the right tang and a hint of smoke.

Although the hotel provided a personalized suggested itinerary for my weekend (excellent for the out-of-town visitor), I chose to wander and see where my feet took me. I know the bones of downtown—I would stumble on anything new as I wandered my way through it.

My own engagement with the city has almost always included music, including great performances at the World’s Fair site over the years— an early 90s Santana concert comes to mind. And at Sundown in the City in Market Square—Bela Fleck’s 2004 performance was particularly memorable. At other venues over the years, I saw many bands,  including a wild evening with Brave Combo, where the audience followed the band out of doors to dance down the streets of the Old City. These were events that acclimated us to coming downtown—forming the core of the crowds you find here now.

Currently, you can find some fine local music.  On the last Sunday of each month, I often visit Barley’s to see The Brockefellers, a versatile band that can play almost anything, including the Game of Thrones theme song, as a surf tune. I’ve seen them do a Black Sabbath tribute on Halloween and welcome a little guest guitar from Hector Qirko, who played on the Knoxville scene for over 30 years. If you go, you’ll dance.

And of course, acts from across the country take the stage at a host of venues small and large: the renovated Tennessee and Bijou theaters, Scruffy City Hall, the Mill and Mine. John Prine will be at the Tennessee in October. Not a show to miss.

Knoxville has grown a downtown that is very human, alive with the realized possibility of a promise I couldn’t quite see years and years ago as I stood on a Market Square that had a stream running straight through it, quite nearly forested with trees and lined with aging storefronts. The Mercury Lounge was one that was open at the time. In the fall of 1990, I won a Halloween best-costume contest there as Prometheus—the costume a package of frozen liver duct-taped to my side. Now, in roughly the same spot where I rescued a fellow party-goer from the chilly October stream, I can stare straight at Preservation Pub, a much more comfortable bar and venue. It’s new, but not.

I was distressed when I heard of plans to tear up that version of Market Square. I am an incurable romantic and get attached to places as they are. By the mid aughts, however, those with greater vision than I crafted a space better than the one before, and now you can wander from restaurant to shop to performance space without leaving the square. And you can hear music every time you step outside—the place is bustling with buskers playing tunes old and new.

In the early 2000s, I was a part-time caterer during the renovation of the 100 block of Gay Street. My favorite moment was jumping the fence to get into the re-construction site of the Emporium so that we could have the dessert portion of a progressive dinner there. It was still dirty and sawdusty: full of moldy history and a frenzied revitalization on pause for our party. The space now hosts the Arts & Culture Alliance, which is a sponsor of First Friday, when you can join the throng of people walking the sidewalks in search of the best art Knoxville has to offer. Go. You will not regret it.

On the evening of my first night out, I wandered past a few of the higher-end restaurants, like JC Holdway and Knox Mason. They looked warm and inviting but were a little too crowded for my mood. I had reservations for a top-tier restaurant the following night at Emilia, so I decided instead to sit with a notebook at Blue Coast Grill, which which has some excellent offerings with chef Curtis Bates at the helm.

Later in the evening, on the sidewalk in front of  the Lonesome Dove restaurant on the corner of Jackson and Central in the Old City, I found myself gazing across the street at a fondue place that once housed Ella Guru’s, where I saw Richard Thompson play a fantastic acoustic set. In a later incarnation of the place, I performed slam poetry. One particular evening, I watched a woman plant a fork in the table in front of a drunk, misogynistic loudmouth who was disparaging a poet on stage.

The poetry scene is a little more refined now, but the generations of poets know one another well. It is another example of a vibrant connection between the old and the new in our downtown.

When it first started livening up, you could only find a few places to eat, like Market Square’s Tomato Head, which a friend referred to in the mid-90s as “Toys R’ Us East” because families with young children often ate there when visiting downtown. Now the expanded restaurant is full of people of all ages, including some of those kids all grown up, eating weekend brunch.

It’s a chilly January, but there is promise in the air. I know what’s coming: festivals like Dogwood Arts, Big Ears, Rossini; the opening of the Farmer’s Market; the hustle of the weekend as more events are held out of doors and the patios of Gay Street, Market Square, and the Old City come to life.

Yes, you can still find the gritty if you look, but to those nostalgic for the bare bones feel of the past, I’ll say this: thousands of our people come here now, many of them are employed here, and some of them are extremely inventive. In the Old City, in a building that once housed a comic book shop, Pretentious Glass and Beer Co. pours a great rye double IPA. You can wander back through a patio and enter the glassworks to watch craftsmen and women shape both the glassware that holds your beer and the art for sale out front. This kind of artistry alive in my town, within walking distance of my hotel, simply thrills me. When I moved here, it wasn’t yet a dream.

Knoxville is both an Appalachian doorstep and a destination in itself. Regardless of the change, of whatever X-factor marks the latest trend in this increasingly celebrated city, Knoxville remains Knoxville, and its individuality thrives.

As my head hits the pillow in The Tennessean, I realize that I have fallen for a few cities: Nashville, Asheville, Richmond, Chicago—but Knoxville above all. And as with the great love of my life, my ability to fall in love with a new city has passed. I don’t have room for replacements.