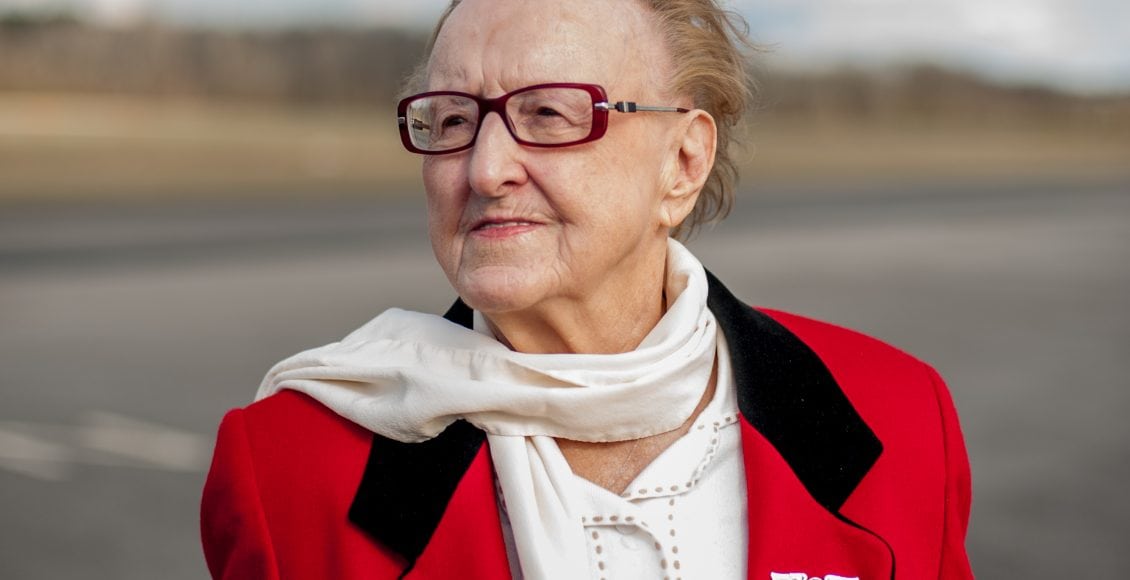 Clata Winningham Finn is 86 years old, and she says her only complaint is that rheumatoid arthritis causes her to move slowly. But she is charming and stalwart and deft with her cane. “In my mind, I think I can do anything I used to do.” She loves to read and is a published poet. After she graduated eighth grade in a one-room schoolhouse in Jamestown, Tennessee, she continued to “borrow” books:

Clata was born in Jamestown on 10 March 1930, the oldest of five children. She says her father had a hard time supporting all of them and that once they graduated from high school, the Alvin C. York Institute, they were on their own. “A lot of people from Fentress County went to Indiana to find work, ‘cause there was nothing to do… so a lot of people had to leave home.”

And at the age of 17 she did leave home, accompanying a cousin to Indiana. She started working to support herself on an assembly line at Goodyear for two years. “They couldn’t get any men. They were doing a lot of war work, for Korea, and we assembled tank tracks. We used power wrenches to bolt the separate parts of the treads together, then they were shipped out to wherever the tanks were made.”

Clata accepted a work/study scholarship to attend Bob Jones University in Greenville, South Carolina, and liked school, but says she found it restrictive. “I had been on my own and supported myself, living alone… it was hard to be a freshman with all the strict rules. You couldn’t go into town without an escort, and so on.” Clata was there for a year before she switched gears, moved to Detroit, and worked in an insurance office for another year. Then she ended up back in Indiana, unsure of what to do with her life, but she knew she needed to be able to support herself doing work that she enjoyed:

“I didn’t seem to be going anywhere… so one day I read in the Sunday paper that the Air Force women had new uniforms. They didn’t have to wear the necktie anymore. So I said, ‘Maybe the Air Force.’ I just thought it might be interesting. I didn’t know any women who were in the service.”

Clata enlisted on her 22nd birthday, 1952, and attended basic training at Lackland Air Force Base in San Antonio, Texas. There were a lot of women in basic training, 50 in her group. “We were tested to see what career we should fit into. I didn’t want to be a clerk/typist, and I didn’t want to be a cook, and I didn’t want to work in supply. At that time, there were no women flying in the Air Force, neither enlisted nor officer.” Later that year, Dwight D. Eisenhower was elected US President. Congress changed the rule, and women were then allowed to crew on flights.

First Lady of the MATS

Clata was one of 10 women to attend “traffic school” across town at Kelly Air Force Base, studying “air traffic and passenger service and freight and mail and whatever was carried on the aircraft…. But once we finished, nobody wanted us. We all went up to headquarters and complained.” Finally, five women, including Clata, were sent to Brookley Air Force Base in Mobile, Alabama. She and her cohorts were juggled around the base into various positions until August of 1954, when Clata was ordered to Westover Air Force Base in Chicopee, Massachusetts, for her first flight with the U.S. Air Force Military Air Transport Service (MATS):

“There were 13 people on that crew: all men, and me. And mine was the 13th name on the crew list. And there were still men who believed that women on a ship is bad luck. And the tail number of the aircraft was 5413. And there were 13 of that particular plane, a large cargo plane,” she laughs. “We could carry 119 passengers or 96 GIs in full field packs. We carried an awful lot of registered mail.”

Clata’s first flight was to Gander, Newfoundland (where she saw the Aurora Borealis for the first time), then to the Azores, to Libya, to Morocco, back to the Azores, to Bermuda, and then home to the US. Sometimes, they would have time and permission to go explore; in some places, like Saudi Arabia, the crew wasn’t allowed to leave the base. She made weekly flights to Panama, Puerto Rico, and Ascension Island, and monthly flights to Brazil. Clata had various duties: setting up the aircraft, overseeing loading and unloading, filling out customs and agricultural declarations, and tending to passengers.

She was most often the only woman on board and she says there was occasionally an awkward atmosphere: “On the short flights, it didn’t really matter because it would just be an overnight. But when you had one that lasted ten days or two weeks, it made a big difference.” The spouses or girlfriends of male crew members were often skeptical that a mixed crew could act professionally, “but once we had proven that we could do our job, they were pretty good about it. I met some really nice people, crewed with some really nice people,” and most male crew members treated her as a comrade.

Most of the time, Clata was “flying the line,” or making scheduled flights. She transferred back to Kelly AFB and began flying to California, Japan, and Midway and Wake Islands. The Pacific flights brought soldiers home from Korea: “Some of those GIs coming back from Korea, they were so happy to see a woman from the States…. That was a long trip,” she chuckles. “Twelve hours, they would chew your ear off. They wanted someone to listen to them.” Clata also volunteered to crew for special missions; one was a 1953 flight to Haiti, picking up Haitians with leprosy and transporting them to the leprosarium in Carville, Louisiana.

Once her three-year enlistment was up, she was discharged. “I went home for 90 days and decided I would just go back.” She re-enlisted in West Palm Beach, Florida, as an instructor in the traffic school there. She crewed flights ferrying U.S. Air Force bands to events around the country and attended an American Airlines training program in passenger service in Chicago. In 1956, she was promoted to Staff Sergeant and posted to Charleston Air Force Base, South Carolina. She began crewing flights to Europe, some of which returned with refugees of the Hungarian Revolution.

She was soon promoted to group flight examiner and ordered to fly with every squadron on the base, checking their flights. But she wanted to get married to an officer, and she was the one who decided to leave the Air Force. She married First Lieutenant Gerald Finn in 1957 in Charleston. They’d fallen in love in West Palm Beach when he was a student at the traffic school when Clata taught there, though he wasn’t in her class.

“Gerry” was posted to Cape Canaveral, Florida, and then to Orly Field, Paris, France, for three years. Clata says she really enjoyed Paris, but it was hard to adjust to life as a civilian. “There’s something really exciting about going down to the flight line in the early morning when no one was around except just a few people who were getting ready to go somewhere, or at midnight. Instead of Military Air Transport Service, we called ourselves Midnight Air Transport Service because it was wheels up at midnight.”

Gerry left the Air Force in the early 1960s, accepting a job with Federal Express, and Clata came back to Tennessee—to Memphis. When the youngest of their three children

reached school age, Clata returned to school herself, earning a Master’s degree in Anthropology from the University of Memphis. “After travelling to all these different places, I thought I’d like to know more about the people and their background.” She worked for Shelby County government and taught several semesters of anthropology at the university. She and Gerry ended up in Crossville after he retired in 1994. “I have family in Jamestown, but I really didn’t want to go back to Jamestown…. I was gonna end up where I started, not that that’s such a bad thing, but it didn’t appeal to me at the time.” They were married for 56 years; Gerry died in 2013.

During her five years in the US Air Force, Clata logged 3229 hours, 45 minutes of flight time, but she was not able to learn to pilot. “I love to fly. If I had stayed in, if I had been in when women were allowed to fly, I would have. As a good friend of mine said after she left the service, ‘Sometimes I’d like to just get on an airplane and go,’ and that was the way I felt.” A photo shows Clata with the first plane she crewed, and the excitement on her face is obvious. She’s proud of her time in the US military and takes the thought of women in combat in stride. “I think that it should be strictly voluntary; other than that, I don’t have a problem with it. I, myself, wouldn’t want to do that, but I’ve known some women who could go out there and do whatever the men do.”

As one of the first women in the service, Clata saw an initially cold attitude toward women change over her time in the Air Force. “In the beginning, we were resented. Eventually, it was just a matter of course. After a time, we didn’t run into any objection at all.”

When Chrissy’s not writing, she’s home with Mom, watching the birds, out with friends, or she has her nose in a book.