Nashville is still certainly thriving off its status as a “music city”—a reputation it has earned through decades of churning out country superstar after superstar. And, if anything, the city’s desire to seek out new and exciting artists has only expanded. There will always be plenty of country music coming out of Nashville. The Honky Tonks on Broadway are packed wall to wall, day in and day out, year-round. But there are also many other new and exciting prospects popping up in a variety of venues small and large. Music City is now more diverse musically than it ever has been: record labels like Infinity Cat have emerged and are creating an international platform for some of Nashville’s most enjoyable garage rock acts like JEFF the Brotherhood and Pujol, while Jack White’s Third Man Records curates classic artists like Willie Nelson and Johnny Cash, puts out contemporary favorites like Sun Seeker and Margo Price, and hosts special live sessions where artists’ performances in their signature Blue Room are recorded straight to vinyl. There a plenty of exciting new things happening in Nashville that solidify its status as a music capital. But you’ll have to be willing to seek out these opportunities to catch something as unique as what appeared in the days of yore. 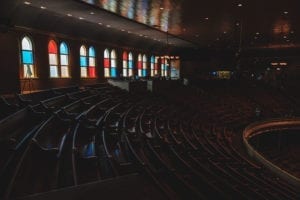 Despite the semi-dissolution of Nashville’s famous Music Row, many of the historical venues still stand and operate, the most renowned of which is the Ryman Auditorium. Built as a church in 1892, the building, which is the epicenter of downtown Nashville, eventually transitioned into a live music venue, and became the home of the Grand Ole Opry from 1943 to 1974. It now operates as a full-time theatre. According to Joshua Bronnenberg, who oversees the tours and museum there, it sees over 250 performances and other events throughout the year. He is also quick to point out that the auditorium didn’t always receive the praise it currently gets, saying “[when] the Opry left in 1974, the building ‘went dark’, as people like to say, with the only activity seen in the auditorium being that of limited tours.” It was not until “two major renovations (1989 and 1993-1994), [that] the building opened to the public in June of 1994 as a daytime tourist attraction and an evening concert venue.”

Since then, it has simply become one of the greatest places to take in a performance, with rows of original pews, a sprawling semicircular balcony, and large, beautifully crafted stained windows. In its central downtown location, The Ryman serves as a beacon of what the city’s music has built over time, with country music’s smaller stepping stones surrounding it.

A myriad of other classic venues line the neon sign spangled street of Broadway, with Tootsies being the most prominent. The pink building sticks itself out both for its striking looks and, for many music fans, because it has been mythologized as a place to see the next wave of country artists in the infancy of their careers. They feature music every night, as do many of the other establishments that line the street—like Robert’s Western World, which has hosted its share of famous musicians while also playing a pivotal role in the revitalization of Broadway that began in the 1990’s. There are also plenty of newer places doing their part to keep Nashville’s reputation alive, like Acme Feed & Seed, Bootleggers Inn, and Tequila Cowboy—all great places for people of any age interested in reveling in the city’s culture.

Downtown, however, is far from the only place to see the up-and-comers perform. Visitors to the Bluebird Café are treated nightly to rising, talented artists showcasing their music before a small audience. Bluebird General Manger Erika Wollam-Nichols notes that it is a different type of venue than some of the Honky Tonks. “The Bluebird is a listening room,” she says, “rather than a party room.” She is referring to the café’s quiet policy, where spectators are asked to hold their talking while the performances progress. This is a significant difference from the Honky Tonks downtown, where the party is every bit a part of the experience as the performance. The Bluebird is a place where the emphasis is on the song as much as anything else. On most nights, they hold what are called “In the Round” events, where “you can expect to see most any songwriter performing,” Wollam-Nichols says, “with peers, co-writers and friends. That could be anyone from Garth Brooks with his co-writers, to a very new songwriter, invited by some more advanced co-writer.”  The Bluebird also maintains its own mystic history, with a slew of artists being discovered there throughout the years.  “Many songwriters and artists have had career moments at The Bluebird,” Wollam-Nichols reflects, “from Garth Brooks’ famous showcase where Lynn Schultz from Capitol Records was in the audience, to Taylor Swift who performed in front of Scott Borchetta, pre-Big Machine Records, to Faith Hill who was singing backup for Gary Burr when she was approached by Martha Sharp from Warner Brothers.”

And many artists still perform there in hopes of capturing one of those career-defining moments, as happens all over Nashville. But it can be daunting nowadays. It’s not clear whose lawn you should land a helicopter on to boast about writing “Sunday Morning Coming Down,” as emerging songwriter Kris Kristofferson did when delivering a tape of the song to Johnny Cash. For many, the battle is self-fought. Stephen Paul is one of those artists trying to pave their own way. He doesn’t have the backing of some larger acts, and still books his own shows through networking with venue owners he’s met over the last few years. “Sometimes I reach out to bars blindly and see if they are interested, which leads to other opportunities along the way,” he says. The country market is also very full, as one might expect, but he says that doesn’t lead to unhealthy competition. “Country music is a family,” he affirms. “No matter how big or small, everyone is willing to lend a help hand. But at the end of the day, it’s like any career. You just bust your butt every single day if you truly want to succeed.”

Those words ring true for everyone working in music in Nashville, not just for country artists. Chris Davis organizes shows under the banner FMRL (pronounced “ephemeral”). The shows display avant-garde and experimental artists from Nashville and elsewhere around the world in houses, clubs, and bars throughout the city (hence the name), not unlike Knoxville’s Big Ears music festival. “The letters FMRL could stand for anything,” Davis says. “I like to say, ‘Free Music Ruins Lives,’ because free jazz and experimental music ruined—or re-tuned—my ears, thus ruining my life, perhaps in a similar way to how bluegrass destroyed John Fahey’s life.” Davis puts on shows for artists like Guzheng player Wu Fei and multi-instrumentalist JayVe Montgomery. They represent a different side of Nashville, one that is not simply country superstardom, but rather is artistic and measured. Davis says those artists “[understand] that pushing noncommercial music in a town built on commercial music success is inherently difficult. But the world is changing and people are exposed to a very wide range of music and they want to hear that music performed live.” FMRL has come to represent the other side of the city, where country music is but one element and not the whole experience. In Nashville, country is king, but its strength is in diversity.