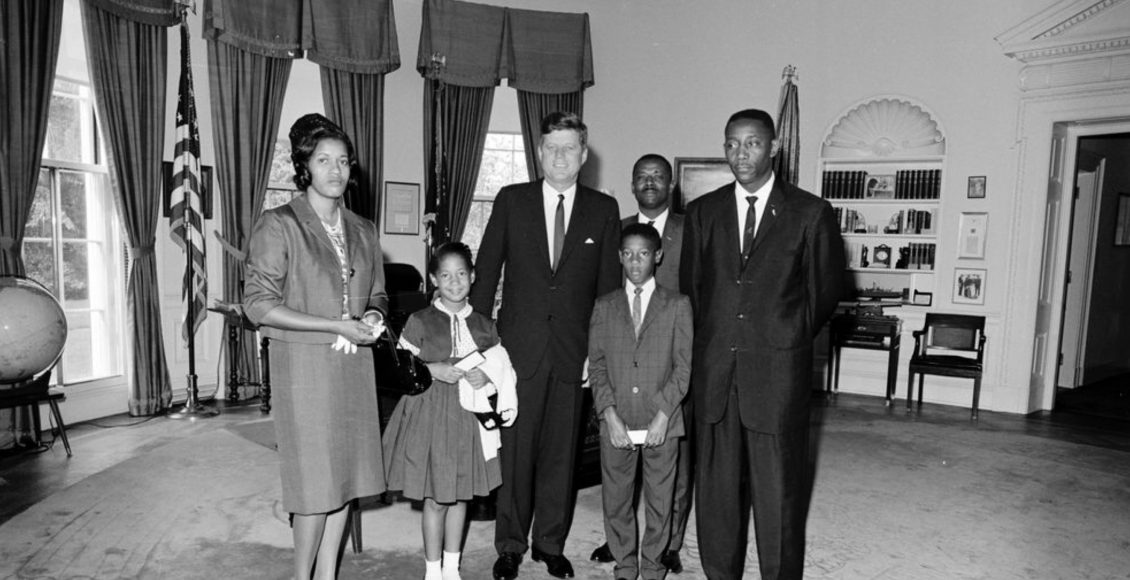 Medgar Evers, born on July 2, 1925, in Decatur, Mississippi, grew up on a small farm, attended a segregated school, and earned a high school diploma. At 18, he enlisted in the U.S. Army, fought in the Battle of Normandy in World War II, and received an honorable discharge at the rank of sergeant. Evers then graduated from what is now Alcorn State University and, after the 1954 landmark decision in Brown v. Board of Education ordering the desegregation of schools, applied to attend to the University of Mississippi College of Law. Because of the color of his skin, he was denied admission. Evers married Myrlie Beasley and fathered three children.

In 1920, Byron de la Beckwith was born in Colusa, California. Five years later, his father, who served as postmaster, died of pneumonia. His mother, Susan, then moved to Greenwood, Mississippi, to be closer to her family. Beckwith was 12 when she died of cancer. Called “De La,” Beckwith lived with relatives for a time, joined the Marines in 1942, and served as a machine gunner in the Battle of Guadalcanal. Injured in a subsequent battle, Beckwith was honorably discharged in 1945.  He married and had one son before the couple divorced.

The unanimous Supreme Court decision in Brown altered the course of both lives. Evers, who had previously helped stage boycotts of gas stations which refused to allow their African-American customers use of their restrooms, became the NAACP’s first field secretary in Mississippi. In that capacity, he led voter registration efforts, organized new NAACP chapters, and attempted to integrate public schools, parks, and beaches. In contrast, Beckwith, a salesman, became a member of the Ku Klux Klan. In the aftermath of Brown, he joined the White Citizen’s Council, an organization designed to preserve the Jim Crow era in the South—resisting integration and working to exclude blacks from holding political office. The membership implemented a variety of economic strategies, such as denying loans and credit to African-Americans, boycotting their businesses, and “encouraging” employers to fire them from their jobs.

Evers’ leadership in the civil rights movement made him the target of white supremacists. As a part of his job, he conducted interviews with African-Americans who had been intimidated by the White Citizen’s Council and had collected affidavits documenting the Council’s racist activities. Further, he investigated the 1955 lynching of Chicago teenager Emmett Till in Mississippi and supported Clyde Kennard, who had been denied admission to Southern Mississippi University and was later falsely charged, convicted, and sentenced to serve seven years in the notoriously violent Parchman Penitentiary.

On May 28, 1963, someone threw a Molotov cocktail into the carport of Evers’ residence in Jackson. Ten days later, he was almost run down by a vehicle as he walked out of his NAACP office. During this time, the FBI and the local police, fearing further acts of violence, regularly escorted Evers from his office to his home.  On June 11, 1963, when President Kennedy was to deliver a major address on civil rights, Evers asked his wife to be sure to watch the telecast. He hugged and kissed his family and then drove to his office to meet with NAACP lawyers.  Shortly after midnight, one of the children heard the familiar sound of Evers’ car and shouted, “Here’s Daddy!” After hearing a “horrible blast,” Myrlie ran to the front door to find that her husband had been shot in the back. Even though the bullet passed through his ribs and lung and penetrated a window of his residence, Evers was able to stagger some 30 feet to the door. As the children screamed for their “Daddy,” Myrlie heard another shot and dropped to her knees.

By then, neighbors had come to the scene. Two individuals placed Evers in a station wagon, and drove him to an all-white Jackson hospital. Initially denied admission, Evers was accepted for treatment when the staff learned of his identity.  Fifty minutes later, he died. In death he had become the first African-American to be afforded medical care at the facility.

Five thousand people marched in unison to Evers’ funeral service. The Rev. Martin Luther King Jr. and other civil rights activists led the procession.  One week after the assassination, Evers was buried with full military honors at Arlington National Cemetery.  A crowd of 3,000 attended the service.

On June 21, 1963, police arrested Beckwith on a charge of first degree murder.  Two weeks later, folk singer and civil rights advocate Pete Seeger invited Bob Dylan to sing “Only a Pawn in Their Game” at a voter registration rally in Greenwood, where Beckwith lived at the time of the murder.

District Attorney General Bill Waller, who eight years later was elected governor, prosecuted the case. The proof at trial established that Evers had been shot by an Enfield 1917 rifle found near the scene—a .30-06 caliber weapon used by American forces in World War I. The telescope on the rifle bore Beckwith’s fingerprint. A farmer testified that he had traded the rifle to Beckwith in 1960. A shop owner testified that he sold Beckwith a scope for a rifle a month before the murder. Witnesses saw Beckwith’s distinctive car in the Evers’ neighborhood on the night of the shooting. Some reported seeing a man meeting Beckwith’s description in the vicinity. At his arrest, police photographed a half-moon scar above his right eye, suggesting the wound had been caused by a recoil from the rifle shot. Despite this evidence, an all-white jury failed to reach a verdict. A second trial two months later, again with an all-white jury, ended in a mistrial. It is likely that jurors saw Governor Russ Barnett, a notorious segregationist, shake hands with Beckwith in the courtroom before their deliberations. The White Citizen’s Council paid the legal fees.

In 1967, Beckwith ran for lieutenant governor, finishing fifth among six candidates. Six years later, police at a roadblock in New Orleans found a bomb in his vehicle, purportedly intended for the home of a leader of the B’nai B’rith Anti-Defamation League. Prior to his imprisonment, Beckwith was ordained in Knoxville by a minister at the Temple Memorial Baptist Church.  While serving his sentence, Beckwith refused treatment from an African-American woman; a guard overheard him claim that if he “could get rid of” Evers, he could do so with the “no account” nurse’s aide.  Paroled in 1980, Beckwith moved to Signal Mountain, Tennessee.

In the late 1980s, when reports by a Jackson newspaper pointed out improprieties in the jury selections of the first two trials, the District Attorney in Jackson sought and received an order of extradition from the Tennessee governor.  When Beckwith was placed under arrest, he fought the order in Hamilton County.  The trial judge denied him relief, the Court of Criminal Appeals in Knoxville affirmed, and our Supreme Court declined review. In his third Mississippi trial, former Klansman Delmar Dennis of Sevierville testified that Beckwith had often bragged about shooting Evers at Klan rallies. A jury of eight African-Americans and four Caucasians returned a guilty verdict. Beckwith, while serving a life sentence, died at the age of 80 on January 21, 2001, almost 38 years after the murder.

In his 1963 song, “Only a Pawn in Their Game,” Dylan had praised the life and legacy of Medgar Evers and forecast the inglorious fate of his assassin.

Beckwith was buried at the Chattanooga Memorial Park. A small stone marks the spot.