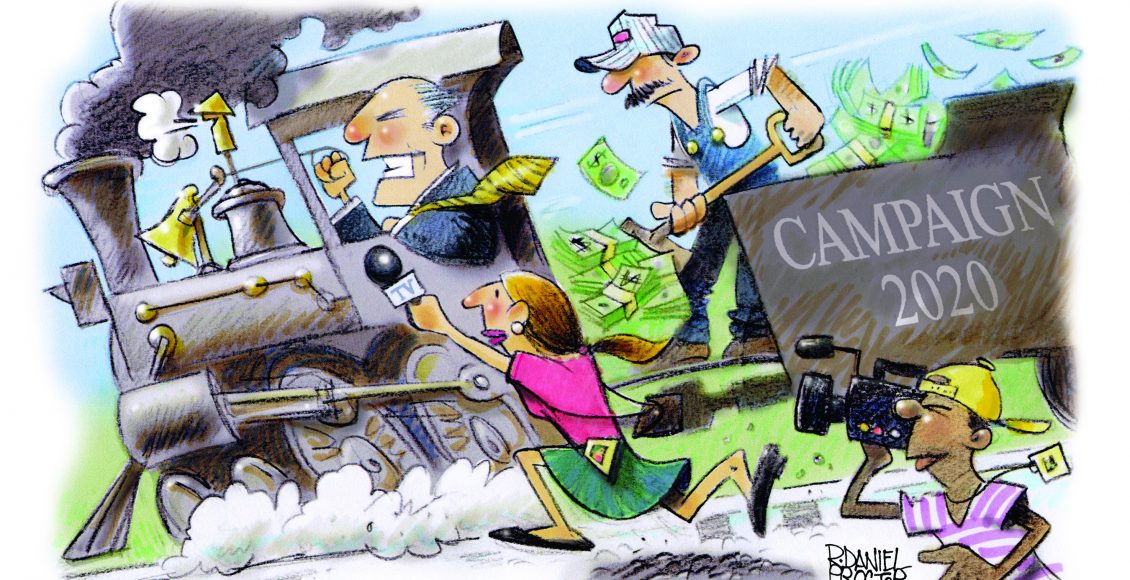 Out of both sides of its mouth—too much or not enough?

The American public, news media, and political candidates themselves have something in common when it comes to money’s influence in politics: they’re consistently inconsistent.

Every election cycle features two certainties: one, public and media complaints about money having too much influence in politics; two, that the public and media don’t take candidates seriously unless their campaign coffers are stuffed with cash.

Candidates and political parties will sometimes try to look good by decrying how campaign spending and fundraising are problems. Meanwhile, their fundraising arms are twisting without letup the arms of donors to squeeze out one more dollar.

There are four pillars upon which campaigns are run: organization, issues, emotion, and money. Without the fourth you’re stymied in creating an effective organization and you can’t consistently communicate your messages, either issue-related or emotional.

I’ve observed and participated in politics and political campaigns as a press secretary and consultant. Over the years I’d have won a lot of money if there were a Las Vegas line on the first question reporters will ask a candidate in a press conference or interview.

My bet: “How much money have you raised?” That’s followed by, “Are you happy with that amount of money (whatever the amount, good or bad), you’ve raised?” or “Why do you think you’re having trouble raising money?” Inevitably, those questions lead to this: “If you can’t improve your fundraising will you get out of the race?”

I once listened to a group of reporter friends complaining about the power of money in campaigns. They went on for a while, and then I said, “You’re complaining about money being too important, but it’s always a major point you cover about candidates. If their fundraising is bad, you write them off. But when a lot of money is spent, you say it’s a bad thing. Which is it?”

“Yes,” someone said, and everyone laughed, because it was funny. But, it’s also reality.

Polls invariably say people want change, but if you were to ask them if they support limits that will hinder their favored candidates from being elected, support would collapse. Perhaps new laws are what we need to finally limit the reach of money’s tentacles in politics. A Pew Research poll in May 2018 said that 65 percent of Americans think that new campaign finance laws “could be written that would be effective in reducing the role of money in politics, while 31 percent say any new laws would not be effective.”  The 31 percent have it right.

Laws are periodically passed to “fix” money in politics. That was the goal of the 2002 Bipartisan Campaign Reform Act (also known as McCain-Feingold). McCain-Feingold replaced a 1971 reform law, but it only created new procedures about which the media and public complained. The fact is that every such law meets the same fate: An army of lawyers immediately going to work figuring out how politicians and political parties can keep raising and spending gobs of money, legally.

Tennessee Republican U.S. Senator Lamar Alexander has had a longstanding answer to the fundraising question, which he related during the 2012 presidential campaign: “Get rid of the limits on contributions, and super PACs will go away. You’ll have full disclosure because everyone will give their money directly to the campaigns and campaigns must disclose their contributions in ways that we’ve already agreed don’t discourage free speech.”

Alexander’s proposal could end the practice of candidates being better-dressed panhandlers, and reduce the importance of “bundlers,” people who can raise large amounts of money for campaigns. It also means that mega-rich donors could, quite literally, give mega-millions to a candidate. Would training a telescope on them make a difference to voters?

Candidates and political parties, regardless of what they might say for appearance’s sake, will try to tear the heart from anything that they believe harms their chances to win. The news media, despite stories or editorials lamenting the force of money in politics, won’t stop using it as a credibility yardstick. Individual voters may want spending limits, but not if it costs their candidate victory.

Those three points are something you can take to the bank, consistently.