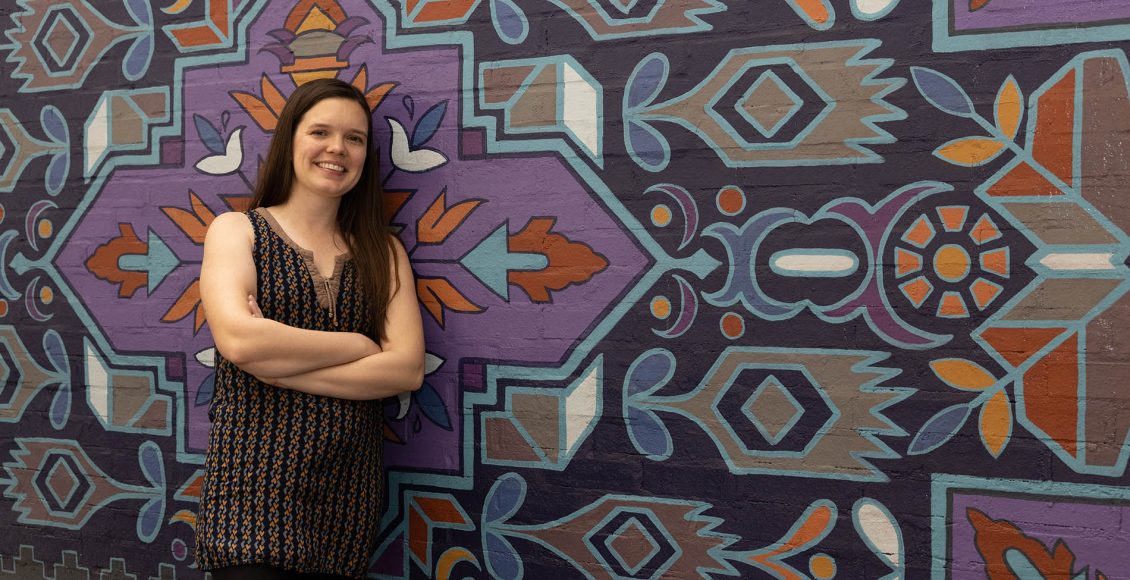 It was Megan Lingerfelt’s first day in Knoxville in late 2018 when she found her place in the regional art scene. Formerly living in Seattle, Lingerfelt had spent time over the previous year honing a new craft in public art, and when she and her partner found themselves in Knoxville, she got to work making a name for herself in her new city. “My first full day in Knoxville, I had a meeting with the program director at Dogwood Arts,” she says, “and we started talking about Strong Alley, ideas of how to revitalize it and get new work into it.”

The meeting helped her make the leap. “They kept giving me opportunities down there in Strong Alley and downtown, and it’s blossomed and grown from there,” she says. Lingerfelt brought new life to the Dolly Parton mural in the alley and updates a seasonal wall three to four times a year. Her most recent installation portrays a spring flower arrangement with varying green tones and delicate white flowers.

Lingerfelt wasn’t always a muralist. An artist since youth, she would eventually find her way to a Bachelor of Fine Arts, with a focus in painting and drawing. “I focused on mechanical forms,” she says. “I really liked the technicality of doing these hard shapes and recognizable forms, repetitive patterns, and that’s kind of been a theme for my work.” After moving her studio in Seattle to a building covered in murals, she contacted the organization responsible for the art and began volunteering with them.

It didn’t take long for her to be hooked on this new art form. “In a public space, it’s very much about space-making,” she says. “It needs to fit into the landscape. It needs to be relevant. And it needs to speak to the space.” Her murals can be found inside establishments such as Vida and Inskip Grill in Knoxville, but her larger murals are outdoors: the Maloney Road Tunnel Project, the Mountain Lake Rowing Association building (one of her largest), and the Lerner Lofts, among others.

Her Lerner Lofts installation, “Windows to the Smokies,” is by far her most memorable, she says. Walking downtown in her new city with a camera in hand, Lingerfelt felt inspired by the old architecture, melded with the new. “The windows are so appealing. They have this sense of nostalgia,” she says. She brought that inspiration together on her mural, every window detailed intricately and uniquely from the rest, with a continuous view of the Smokies across them. “That was my first experience of the city, and it was a very welcoming one. And so getting to put that into a composition design format was really satisfying.”

Lingerfelt finished out 2020 with roughly 20 projects under her belt, and she anticipates doing even larger projects this year. While most of her work last year was focused in Knoxville, you can anticipate seeing her work show up in municipalities outside of the city in 2021. “I’m not creating them for myself,” she says. “I’m creating them for the person on the sidewalk.”