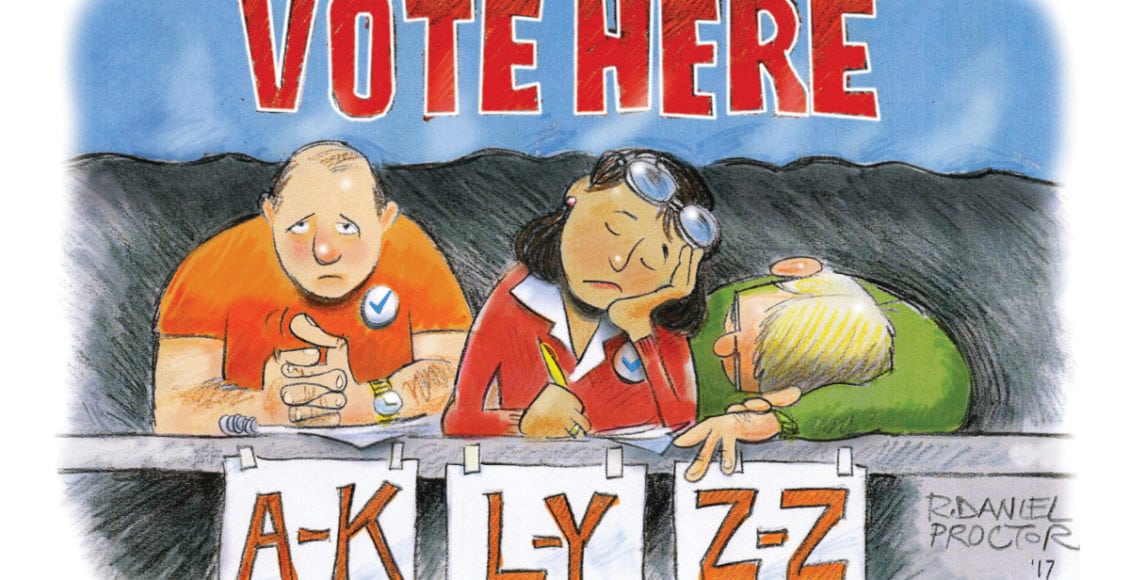 If a hitter’s batting average is .100, he’s headed to the bench, or off the team. If one in 10 seats is filled at a concert, it’s a flop. If nine of 10 people ignore invitations to a party, someone’s popularity is in the dumpster.

Only in politics can a one-in-10 turnout be praised as a success.

The 2017 Knoxville City Council primary elections, with 30 candidates running in five council distracts, attracted 7,140 voters, or about 240 votes apiece out of a possible primary election voting universe of 75,000.

To mark the outcome, Mayor Madeline Rogero said in a news release, “The citizens, inspired by the candidates, were engaged and turned out to vote in large numbers. The number of people who voted in Tuesday’s election was up by about 75 percent from the number who voted in 2009, the last time these same Council seats were on the ballot and there were no incumbents running.”

Actually, turnout should have been higher with no incumbents running. Incumbents tend to drive down turnout. There’s a perception that it’s too difficult to raise money against an incumbent; that they’ll get the lion’s share of endorsements; and that people don’t want to irritate someone who’s likely to be in office anyway by visibly supporting their opponent with yard signs, contributions, etc.

Even accepting Rogero’s point that the 2017 results were substantially better than 2009’s, what it means is that a terrible turnout compared to a terrible, horrible turnout becomes “large numbers” of voters going to the polls. Sow’s ear, meet silk purse.

Even some of the candidates running for the office have found themselves unwilling or unable to participate in city elections. On Aug. 26, the News Sentinel published a story headlined, “One-third of Knoxville City Council candidates have never cast a city election vote,” which said, “Nine of the record 30 people running for office have never voted for the office they seek, city charter amendments or city mayor elections.”

The downward, sliding slope of interest in city elections has been underway for years. In the January – February 2016 Cityview, this column spotlighted the reasons, or lack of them, for moving the dates of city contests to coincide with bigger elections. A look at contested mayors’ race turnout since 1987 illustrated the decline in voter interest (below, the winner is listed first and totals include minor candidates):

And that’s for the city’s top job.

Turnout would undoubtedly be somewhat higher if dates were changed. However, so would the participation of know-nothings; people who know more about the Vols’ football schedule than local issues; and those who vote only on the basis of some personal bias—for example, if the candidate is a man or a woman. That’s not an informed electorate.

In an odd way Knoxville voters’ apathy creates the situation about which many Americans often complain, that too few people make too many decisions for too many others.

As this is published, the City Council general election is about to be held. Perhaps this Election Day will show a change in the pattern. It’s either that or we’ll see yet another uptick in the number of voters who saturate the polls with their absence.