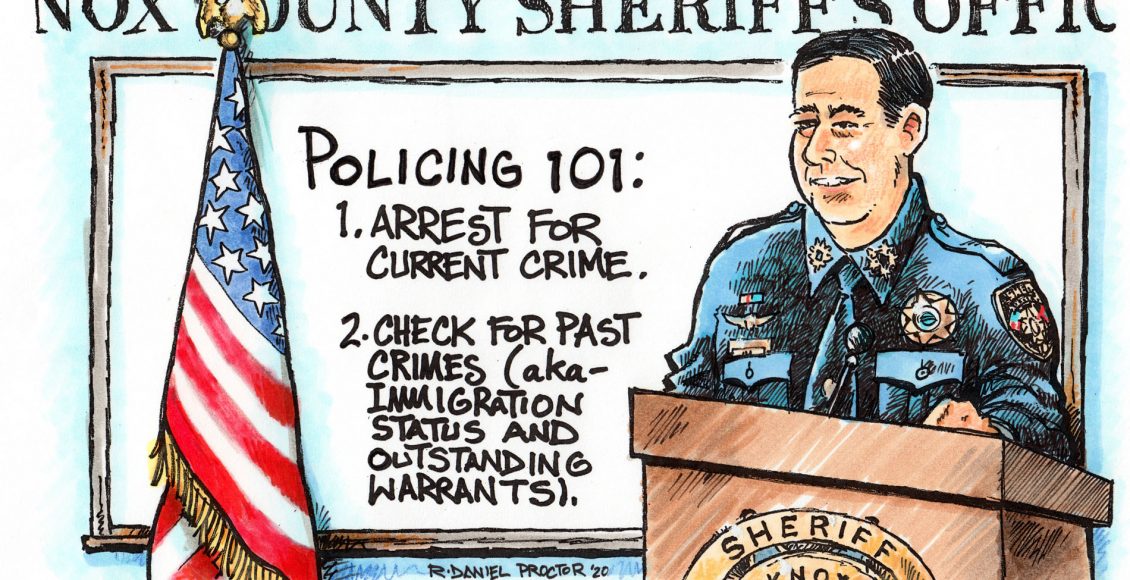 Some months ago, I was in a social media conversation with a then-city government official on the topic of illegal immigration. Liberal politically, he complained about President Donald Trump’s efforts to close the southern border to people illegally entering the U.S.

His points included, generally speaking, that people coming here against American law are looking for a better life.

On that basis, I asked him which local laws people can break with his similar approval if the person is looking for a better life?

I didn’t get an answer: He broke off the conversation.

A similar dynamic swirls around Knox County Sheriff Tom Spangler’s decision, made known in May 2020, to renew the county’s 287(g) program agreement with U.S. Immigrations and Customs Enforcement (ICE).

ICE describes the program, in part, as a “force multiplier in the identification, arrest, and service of warrants and detainers of incarcerated (emphasis added) foreign-born individuals with criminal charges or convictions.” Under 287(g), the sheriff’s department checks the individual’s immigration status; if the person is in the U.S. illegally, ICE can issue a detainer. An immigration judge ultimately makes the decision concerning deportation.

Sheriff Spangler is adamant that no one is arrested solely for being in the country illegally; ICE is contacted only when someone is arrested for another crime.

Opponents of 287(g) maintain that breaking the law to come to the U.S. doesn’t merit people being reported to ICE if, once here, they’re subsequently arrested for breaking another law.

For example, the website of the Allies of Knoxville’s Immigrant Neighbors (AKIN) says the group “believes that 287(g) and other forms of police-ICE collaboration threaten the well-being of our community. The vast majority of immigrants held in the Knox County Jail were arrested on nonviolent misdemeanor offenses. Because of 287(g), these misdemeanor offenses may result in major immigration consequences for immigrant residents of our community.”

That’s a long way around the barn, as we say in Tennessee, to say that people who break immigration law might face immigration-related legal consequences if they’re arrested on other charges. Furthermore, the reality is that once here, some immigrants commit crimes, from traffic violations to murder. A small number? Yes, but it happens.

U.S. immigration law sets out on first offense fines, imprisonment up to six months, or both, for any alien who attempts entry into the U.S. at a time or place other than designated by immigration officers, eludes examination or inspection, or provides false information.

It’s a tough sell for many Americans to line up behind the idea that someone who broke the law to come into the country shouldn’t be held accountable for doing so if they’re arrested for another crime. If an American is stopped for a traffic violation, no arrest takes place; however, the officer will check to see if there are outstanding warrants on the driver. If the person says, “But I don’t agree with that law,” it’s unlikely the officer’s response will be, “In that case, move along, nothing to see here.”

It’s understandable why people in impoverished countries would want to come to the U.S. If the choice is between doing better for their families vs. running the risk of capture, many Americans would be swimming, digging, running, or pole-vaulting over the border. But that doesn’t make it legal.

Politically, it’s a tough sell to motivate a majority of citizens to accept “looking for a better life” as a reason why the sheriff’s department shouldn’t be in contact with ICE. Neither are the arguments that most people here illegally are working, paying taxes, doing the jobs Americans don’t want to do, etc.

From a public perception standpoint, Spangler may be doing too much explaining. A simple statement that he’s doing this to better protect the citizens of Knox County, and that obeying the law applies to everyone, citizens and aliens alike, is probably all he needs to say.

Americans appear to compartmentalize these issues. They generally feel compassion for people looking for a better life. Nevertheless, they also don’t agree with people breaking the law, particularly if they’re here illegally and arrested for another crime.

If someone wants to run against Spangler on this issue, the chance of them achieving a better life as sheriff is non-existent.

“I have recently received a subpoena filed by my neighbor summoning me to court for my dog running loose. I am concerned they will take my dog and do God knows what…” —Dennis