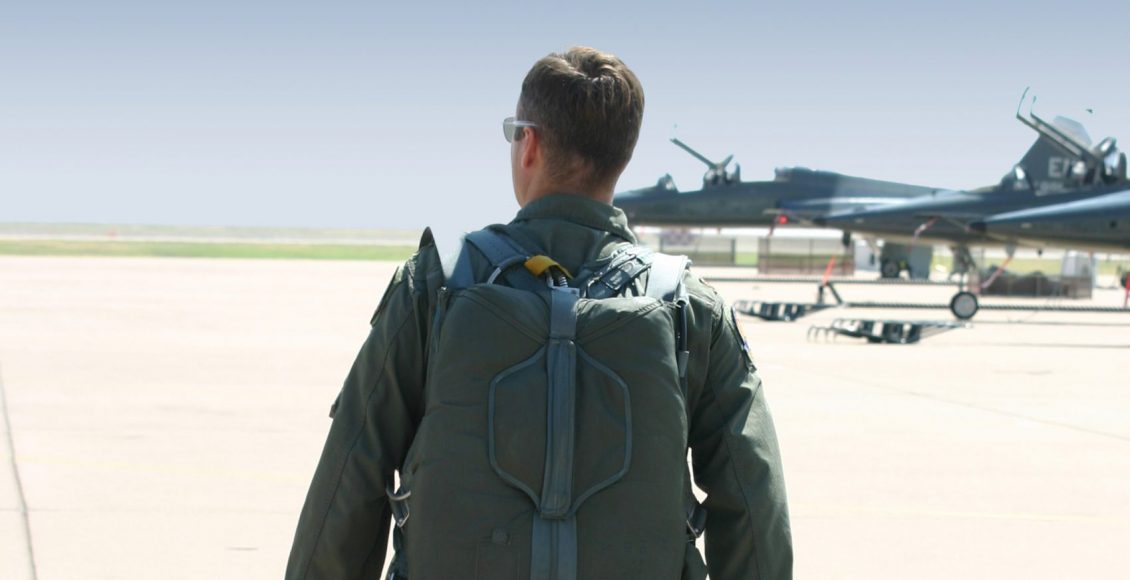 This is a fighter pilot walking out on the flight line to fly his jet.
Share

As a farm boy in Kansas, Charles Plumb dreamed of flying airplanes. His acceptance by the Naval Academy in 1960 became the first meaningful step towards his ultimate goal. After graduation, he completed flight school and reported to the Fighter Weapons School at the Naval Air Station Miramar in San Diego. Remember the 1986 movie classic Top Gun, starring actors Tom Cruise and Val Kilmer as elite jet pilots? Through his training at the Fighter Weapons School, which had been made famous by the movie, Plumb became a real, live “top gun.”

Five days before his scheduled return to the states, Plumb undertook his 75th, and last, mission over Hanoi. While traveling at a high speed and positioned low to the ground, his plane was struck by an enemy surface-to-air missile. Because of the awkward position of his plane, his survival depended upon a successful ejection and an especially sturdy parachute. While landing safely to the ground, he was immediately captured by North Vietnamese villagers and taken as a prisoner of war. For the next 2,103 days—almost 6 years—he lived in an 8’x8’ prison cell, somehow surviving the ordeal in relatively good health. In January of 1973, the United States entered into a peace agreement with Vietnam, officially ending hostilities between the two nations. One month later, Charles Plumb was returned to this country as a decorated Naval officer. He continued his military career as a pilot, retiring as a captain in 1991.

Well after his return to the United States, Plumb had a chance encounter with a former Naval petty officer—the lowest of all ranks—which changed the direction of his life. This is his story, as told over and over again in the ensuing years.

While Plumb and his wife sat at a restaurant, he noticed a man about his own age staring at him from across the dining room. Eventually, the man approached Plumb’s table, stuck out his hand, and said, “You’re Plumb! You flew fighter jets in Vietnam from the Kitty Hawk. And you were shot down!” Startled, Plumb asked, “How in the world did you know that?” After a pause, the man answered, “Well, I packed your parachute.” Plumb grasped the man’s hand in gratitude. While smiling broadly and vigorously shaking Plumb’s hand, the man proudly declared, “I guess it worked!” “It sure did,” Plumb responded, “Otherwise I wouldn’t be here today!” After reflecting for a moment upon his ejection from the plane and his successful return to earth, Plumb confessed, “In truth, three of the eighteen suspension lines broke, but that was my fault, not yours. I was flying too fast. So, I was just grateful the chute worked.”

That night, Plumb was unable to sleep, thinking of the young petty officer who had literally saved his life—just by doing his duty. Plumb thought, “I wonder what he looked like in his Navy uniform—the white cap and the bell bottom pants . . . . I wonder how many times I passed him on the ship or exchanged salutes without ever taking notice or saying hello—because I was a jet pilot, a “top gun,” and he was just a sailor, performing menial tasks in the bowels of the ship—which, thankfully, included carefully weaving the shrouds and folding the silks of each chute.”

Today, Plumb is a nationally known motivational speaker. His most popular presentation begins with the question, “Who packs your parachute?” In 1967, he needed the literal parachute, yet later learned that his everyday life required the figurative parachute—the spiritual or emotional support he has required in his personal and professional life . . . . And, he says to his audiences, so do we.

In October of each year, the members of the Tennessee Supreme Court, traveling from Knoxville to Memphis with other stops along the way, enjoy the privilege of administering the oath of office to law graduates who have passed the bar exam and otherwise met all standards for character and fitness. Each candidate for admission to the practice recites the same pledge:

I do solemnly swear or affirm that I will support the Constitution of the United States and the State of Tennessee. In the practice of my profession, I will conduct myself with honesty, fairness, integrity, and civility to the best of my skill and abilities, so help me God.

Many in the legal profession remember that moment as the most gratifying in their entire careers. For the nine years I served the state’s highest court, I could not help but notice the smiling faces of family and friends who attended the ceremony, all watching attentively as “their” candidate stepped forward to be granted the privilege of engaging in the practice of law. Mothers, fathers, grandparents, brothers and sisters, husbands, wives, sometimes children, and so many others who had touched these young lawyers’ lives in such important ways—they qualify as “parachute packers,” having richly deserved to share in the joy of this special achievement.