The Three Basics of a Love of Flight 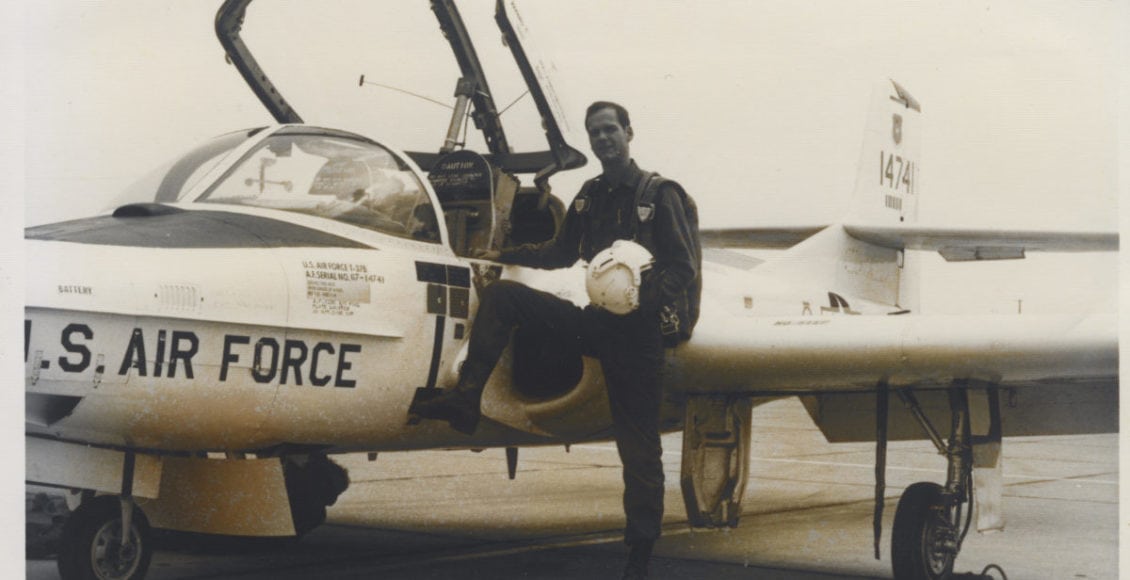 The power at Downtown Island Airport is temporarily shut down while a breaker is replaced, and 63-year-old Mike Copeland sits at the table in a dim conference room. Tall and cheerful, he relaxes in a chair in what appears to be his optimum bearing and attitude. He was born in Knoxville on September 19th, 1953 to John and Zelma Copeland. Mike and older brother Richard grew up in South Knoxville and went to Young High School.

When Richard graduated, he enlisted in the Air Force. Mike graduated in 1971 and enlisted that December:

“I was working in Miller’s Department Store, and I walked up to the courthouse and there was an Air Force recruiter on the main floor, and because my brother was in the Air Force, I stuck my head in and the next thing I know, I was drinking the Kool-Aid. [I] listened to their stories and got excited and I came home and told my parents I was going into the Air Force.”

Mike entered basic training in San Antonio, Texas, soon after Christmas that year. His flight there was the first time he’d ever been on an airplane.

One: “The neat part of it was it could be an overcast, nasty day, and you would take off and then you would all of a sudden be on top of the clouds and everything’s beautiful.”

Mike says his love for aviation developed after basic training, as he qualified to be on an air crew as a tail-gunner trainee at Castle Air Force Base in Atwater and then at Robins AFB in Macon, Georgia. In November 1972, Mike was posted to Guam as a tail-gunner on a B52 bomber during the Vietnam War. The B52 squadrons ran missions out of Guam and Thailand, and Mike and his crew arrived as the war was nearing its end:

“I didn’t understand the significance of that at the time, being 18 years old. We flew around at low altitudes a lot, to avoid being shot down, and it was always very rough and violent when you were down at low altitudes. It was very bumpy… and I remember always strapping down very tight to keep from being slung up against the sides.”

Despite being alone in the tail of the airplane amid boneshaking turbulence, Mike says he was never really frightened because the B52s were rarely shot down. “And the reason nobody got shot down,” he says, “was because they would never send the B52s. They didn’t want to have those assets up in an area where they could get shot down, so we were basically down South, bombing areas where the Viet Cong were coming down [across the DMZ].”

In late 1972, following multiple deadlocks in the Paris Peace Accords, then-US-President Richard Nixon pledged aid to South Vietnam. In December, to demonstrate the US commitment to the South, US B52s began bombing North Vietnam, and the danger to Mike’s crew and other B52 crews became imminent:

“The next thing we knew, we were going up north, above the DMZ, and bombing Hanoi and Hai Phong and those areas—about a 23-hour mission. We all became at risk. The first night, I think they shot down six B52s, and then I flew on the 22nd of December and I guess they had shot most of their SAM [surface-to-air] missiles and we didn’t see many that night. The next night, they shot down more. Lucky. In the right place at the right time.”

With the exception of his posting in Guam and a short stint of R&R in Thailand, Mike was never on the ground in Vietnam or the rest of Asia. He says he never experienced what many of his fellow soldiers did or suffered any post-traumatic stress after the war:

“I was just so young and so inexperienced, and I was in the air, and I didn’t really know what to be afraid of. I don’t remember ever really being frightened of it. I guess that’s the good thing about young people: they always think it’s going to turn out well. I always saw the good in everything.”

Two: “And then, it was the excitement of going other places and seeing other things.”

After the war ended, Mike received a scholarship to the University of Tennessee. In 1976, he earned a degree in business logistics and transportation, graduated as a second Lieutenant, and entered pilot training at Vance Air Force Base in Enid, Oklahoma:

“In pilot training…, you had hardly any time. You might have 50 hours in an airplane, and they turn you loose in a twin-engine jet. I can remember sitting on the runway and running the jet engines up and taking off and being up there and thinking, ‘I can’t believe they’re gonna give me a paycheck on the 15th and the 30th’.”

Once his preliminary pilot training was completed in 1978, Mike was posted to Seymour Johnson Air Force Base in Goldsboro, North Carolina, and was trained to pilot the B52. Until 1982, he piloted domestic and international training missions during the Cold War. He’s still not allowed to say much about what were basically suicide missions:

Copeland says this period was the only time he really got scared:

“They would send us out to Montana and those areas, and we would be flying at night in the mountains, and you would come over a mountain and then to stay out of the radar beams, you would have to push over and go down the backside of the mountain. But then when you got to the bottom, you would have to pull back out so that you wouldn’t hit the ground. I would have these recurring nightmares of not being able to pull out. We had these low-light TV cameras and I would see, in my nightmares, the rocks rushing up and know there was no way to pull out.”

From 1982 to 1986, Copeland was an instructor on the T38 jet in a new training program: the Euro-NATO Joint Jet Pilot Training Program at Sheppard AFB in Wichita Falls, Texas. All the NATO countries participated in the program. “There were instructors and students from all these different countries. They just shoved us all together and the idea was that if we all trained together, then if we ever came into a situation in a conflict, we would be able to operate more efficiently.” During that period, Copeland attended an Air Safety Management Program at the University of Southern California and became an accident investigator for T38 crashes around the country.

He says the next step for a military pilot was then to stop flying and enter a non-flight posting for four or five years. “But my passion has always been aviation, and I want to be around it, I want to do it…, so that didn’t really interest me that much.” A friend from Seymour Johnson was then flying with USAir, and Copeland contacted him. Before long, he was flying with both USAir and British Airways. “Flew a little bit of everything over the next 20 years: Boeing 757s and 767s, Airbus 330s….” Copeland says that one of the things he most enjoyed about his job with the airlines was “jumping between those airplanes, flying different things, and the mission being different.”

At this point, Copeland was living in Knoxville again, “and that was very common…. There were a lot of pilots living in Tennessee because of the tax benefits, no state income tax.” He flew international flights for about 10 years. “Paris, London, Rome, Madrid… I love to go around and walk these cities. You’re over there for about 26 hours, and so you’re able to walk and see all of these different cities…. I probably know London and Paris and Rome better than I know major cities in the United States.”

Three: “And then, it was the actual physical part of controlling a machine in all these different axes. In an aircraft, you’ve got a whole 360 sphere to maneuver in. People ask me what my favorite plane is, and I like them all. I like everything about all of them.”

When Copeland retired from the airlines, he knew he wasn’t finished flying for a living. He opened Flight Choice, an air charter company based at McGhee Tyson and Downtown Island Airports and bought an airplane that still had an air carrier certificate attached, which is required to carry passengers or cargo for hire. Copeland says there aren’t many charter pilots because getting a new carrier certificate from the FAA [US Federal Aviation Administration] is an extremely long process. “It’s really difficult to get a charter certificate. Say you met the minimum requirements—you would fill out a letter and send it to the local FAA office and they respond and say they’ll get to you as quickly as possible, and it might be two years before you hear anything.”

Copeland considers a good charter company to be as important to local and state infrastructure as any interstate system or airport and says flying charter can be a stark contrast to his experience flying for an airline. “I would have 290 people on an A330 Airbus coming in from Rome, and you land and for whatever reason your gate’s not available and there’s nothing you can do about it. Then those people can’t get off the airplane, and you know every minute you’re waiting, someone’s missing their connection.”

Copeland gets most of his work through word of mouth and says that, depending on where you’re going, flying charter can be an economical choice. He flies someone somewhere for a business meeting or carries parts to manufacturing facilities that need them; he flies for the airlines (if something’s broken on a flight, the airline might need a part and a mechanic, and he flies them to wherever they’re needed); and then there are just the random passengers who need to get somewhere quickly. “It’s a lot cheaper than most people think. Every day, I fly for fun. I get the enjoyment of flying and I get the enjoyment of helping people out when they’re in a jam. I’m saving the day.”